The Islanders, the top-ranked team in Class 3A, held off the No. 2-2A Polars behind Tyrell Terry and Kameron Givens, who combined for 43 points. 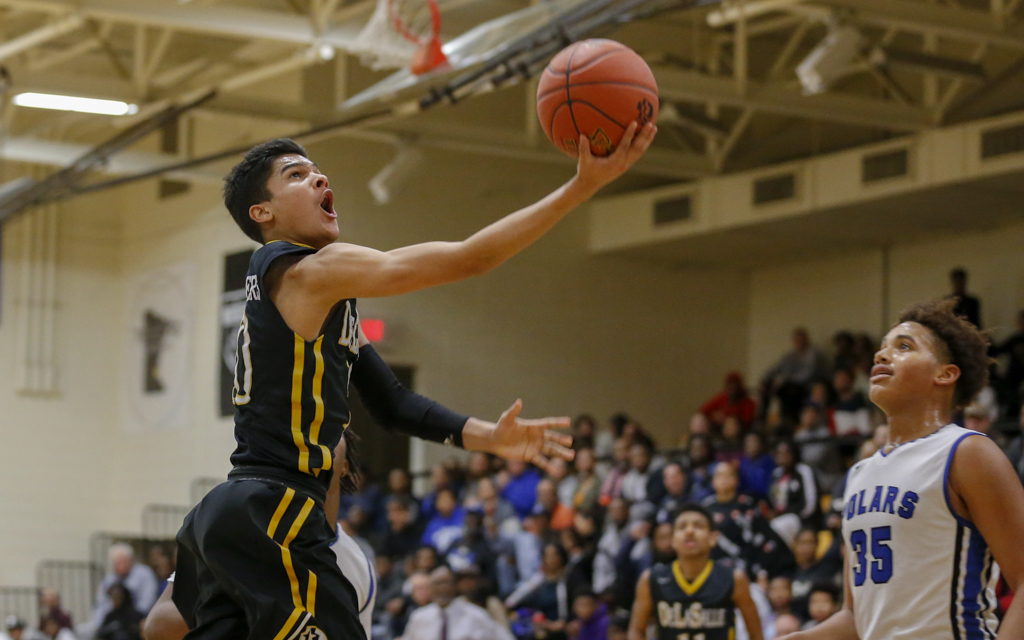 DeLaSalle's Tyrell Terry goes in for a layup against Minneapolis North. Terry had a game-high 23 points in the Islanders' 66-57 victory over the Polars Tuesday night in Minneapolis. Photo by Jeff Lawler, SportsEngine 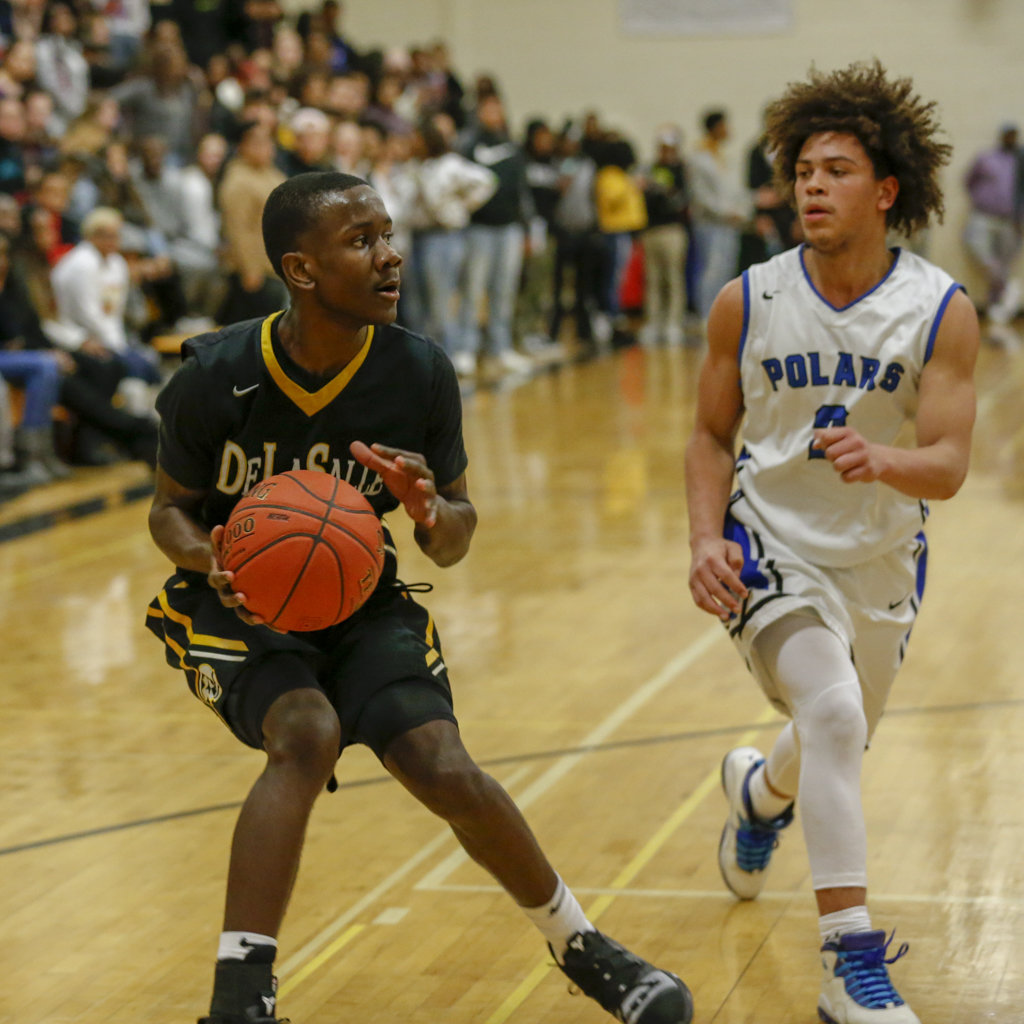 DeLaSalle senior Kameron Givens pulls up for a shot as Minneapolis North's Eli Campbell defends. Givens had 20 points in the Islanders' victory Tuesday night over the Polars. Photo by Jeff Lawler, SportsEngine

When the season nears the final stretch, if nothing else, DeLaSalle can say it’s well-prepared. Maybe more so than any other team in the state.

Tuesday, the Islanders, ranked No. 1 in Class 3A by Minnesota Basketball News, returned home to host No. 2-2A Minneapolis North. Playing without their leading scorer, Jamison Battle (28.8 points per game), the Islanders absorbed a second-half charge from the Polars and finished out a 66-57 win to reignite a dormant rivalry — and close what might have been the toughest four-game stretch any team in Minnesota will have faced this season.

DeLaSalle’s last three games were in the Hoop City Classic in South Dakota over winter break, where the Islanders lost 78-68 to national powerhouse Findlay Prep (Nev.), beat nationally-ranked (No. 16) Mountain Brook (Ala.) 62-61 and lost 71-65 to reigning South Dakota Class AA state champion Yankton. Battle, who rolled his ankle early in the first matchup, hasn’t played since.

“It’s been crazy, to be honest with you,” DeLaSalle coach Travis Bledsoe said. “It’s definitely one of the hardest stretches I’ve been a part of. It has to be top in the state. Again — state champions from South Dakota, Findlay Prep, Mountain Brook, North. It’s been a gauntlet. We’re happy we got some wins in between and didn’t go 0-4, which was a possibility [against] a lot of teams in that stretch.”

Against an athletic and balanced Minneapolis North team, DeLaSalle led 25-18 at halftime, but fell behind by as much as four early in the second half. A big effort by senior Tyrell Terry, who had 18 second-half points to finish with 23, helped the Islanders pull back ahead, as did 20 points from Kameron Givens.

“That was really tough three games, and coming back and playing North next game is very tough, especially having Jamison Battle out,” Terry said. “That makes us all step up. It’s been tough, but we’ve fought through adversity and I feel like we’ve done well.”

DeLaSalle (6-3) also missed Terry for a couple games earlier in the season due to injury, and the Stanford-bound senior came into Tuesday averaging 28 points per game. Terry’s big-time scoring is a new role for the 6-3 guard, who was more of a facilitator last year and on his AAU team this past summer.

“Surprisingly, my team’s played without Tyrell, played without Jamison, and we’ve been in all the games with a chance to win,” Bledsoe said. “If somebody had said that before the season, I would have laughed at it. But we’ve had a lot of dudes step up, we’re kind of a next man up kind of team.”

Givens’ presence was especially important against the Polars, as he finished around the rim and made key plays in the second half.

“Kam is a very talented player,” Bledsoe said. “I’ve been talking to him every day, telling him to be aggressive, he can handle it. We need him to score. Today was his coming-out party, we need that to finish the season.”

Jalen Travis added 10 points and eight rebounds as the lone big man with Battle out. The silver lining to players missing time with injury has been the opportunity for others to step up in meaningful ways.

“It’s huge. Kam Givens had 20 points for us tonight,” Terry said. “Without those 20 points, you never know if we win this game. With me being out, and Jamison being out, it’s bad. But we’ve also gotten positives from it. It just makes everyone better for when we’re at full strength going down in the stretch of the season.”

Between the level of competition and the need for players to step up, few teams are able to say they’ve faced the kind of adversity and pressure the Islanders have. And the cherry on top to finish this brutal four-game stretch is a win in the first game between DeLaSalle and Minneapolis North since Feb. 4, 2011, a 63-61 Islanders’ win.

Bledsoe, a DeLaSalle alum, grew up in North Minneapolis.

“I’m from the north side of Minneapolis, so just to get this win means a lot to me,” he said. “I’m proud of my team, the way they came out, withstood a hard run. And they fought back and finished the game strong.”

It had been a while since two of the top boys' basketball programs in the state met. This time, it was DeLaSalle that won on its home court in a 66-57 win over intracity foe Minneapolis North on Tuesday night.

Minneapolis North, ranked No. 2 in Class 2A by Minnesota Basketball News, briefly led early in the second half, before the game became a back-and-forth affair.

Tyrell Terry had a big game for the No. 1-3A Islanders, finishing with 23 points. Teammate Kameron Givens added 20 points while Jalen Travis had 10 points and eight rebounds.

The teams last played each other on Feb. 4, 2011, which resulted in a two-point Islanders’ win at Minneapolis North. 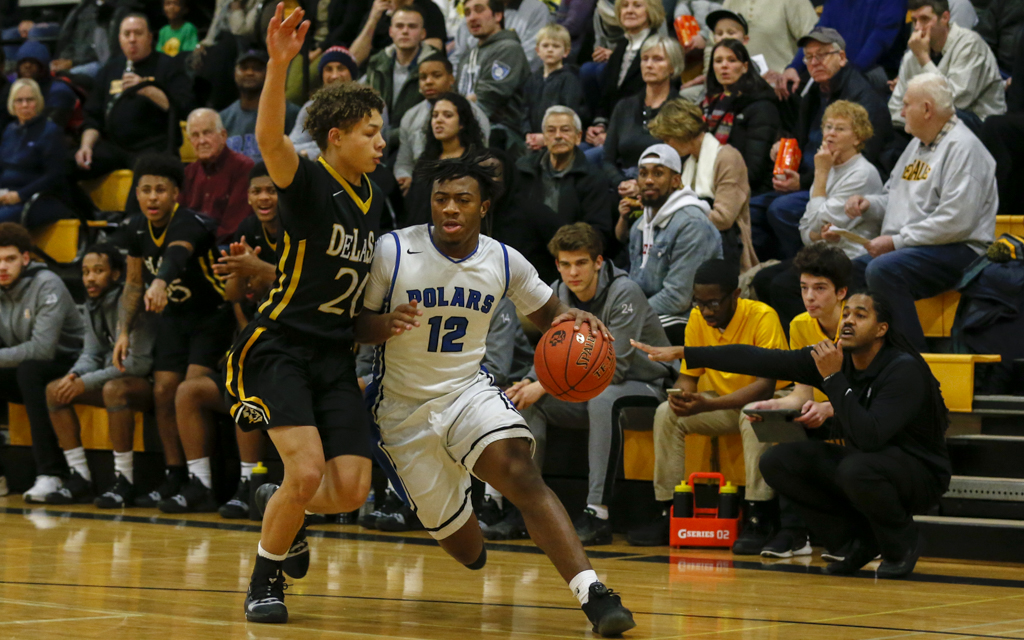