The Eagles earned a chance to defend their Class 4A title after a 58-45 victory over their South Suburban Conference rival. 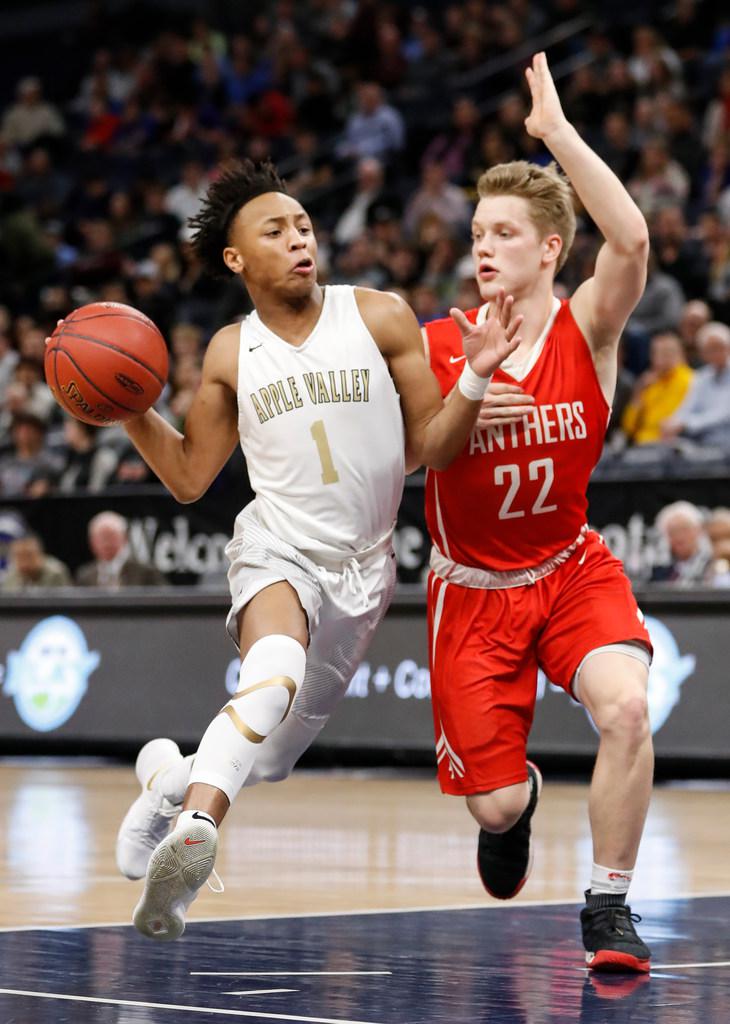 It’s become Apple Valley’s M.O. over the last half-dozen years, three of which have ended in state championships.

Have a superstar as a foundation. Play gutty, hard-nosed defense. Count on a different player to step forward in any given game.

It’s not always pretty, but it certainly is effective.

Thursday at Target Center was no exception. The Eagles advanced to the Class 4A championship game for this fourth time in six seasons with a 58-45 victory over Lakeville North.

Tre Jones, the Duke-bound superstar, led the Eagles with 16 points and 11 rebounds. The defense held Lakeville North, normally a good shooting bunch, to just five field goals after halftime and forced the Panthers into a dismal 1-for-17 from the three-point line.

And senior Zach Korba, who didn’t score in the quarterfinals, made five of six field goal attempts and had 12 points. Luke Martens added 11 points, including three three-pointers, for the Eagles.

“That’s been the neat thing about this group,” Apple Valley coach Zach Goring said. “We certainly have Tre at the top, and Luke is a pretty consistent second-best player. And then there is a whole bunch of them that we just piece together. Whoever is playing well that night, we’re going to roll with.”

Lakeville North coach John Oxton said he knew his team didn’t shoot well, but the numbers were even worse than he originally thought. After a tight first half that saw Apple Valley take a 29-27 lead, the Panthers dug a hole for themselves by missing their first 13 shots in the second half.

Goring acknowledged that his team is rarely going to earn any style points, but the results are what matters.

“We have to grind out games,” he said. “That kind of who we are. Ten seniors, all best friends. They share the ball, they don’t care who scores. They just want to win.”

After Apple Valley defeated Lakeville North 58-45 in the Class 4A semifinals, it’s time to appreciate the Eagles for something other than Tre Jones.

Sure, Jones is the star and team’s best player, but the senior point guard had an off-game Thursday, scoring 16 points, seven under his average.

But there was Zach Korba, chipping in with 12 points on five-of-six shooting. And Luke Martens, hitting three three-pointers en route to 11 points. Spencer Rolland and Logan Wangerin providing muscle inside and guards Josh Arnold and Nathan Macho showing up with athleticism and clutch baskets.

Jones certainly wasn’t bad. While his scoring might have been off, his overall excellence was evident in his entire line, which included 11 rebounds and seven assists.

With the two South Suburban Conference foes so familiar with each other, the first half was as expected, with neither team able to gain much of an edge at Target Center.

After allowing Lakeville North to take an early four-point lead, Apple Valley eventually built a six-point edge. But Lakeville North never let the Eagles get out of sight, cutting the lead to a single basket on three separate occasions, including a last-second basket by Tyler Wahl that pulled the Panthers within two, 29-27, at halftime.

Things turned chilly for Lakeville North in the second half. The Panthers, who shot 50-percent (11 for 22) in the first half, went cold, missing their first 13 shots.

Apple Valley slowly extended its lead, but the Eagles could never fully shake the pesky Panthers until they started taking advantage of Lakeville North’s late, desperate attempts to attack the glass. Apple Valley turned them into runouts and free throws, finishing the game on a 7-0 run.