The Raiders, behind Minnesota recruit Daniel Oturu's big second half, defeated the Eagles 60-56 to advance to the Class 4A championship game. 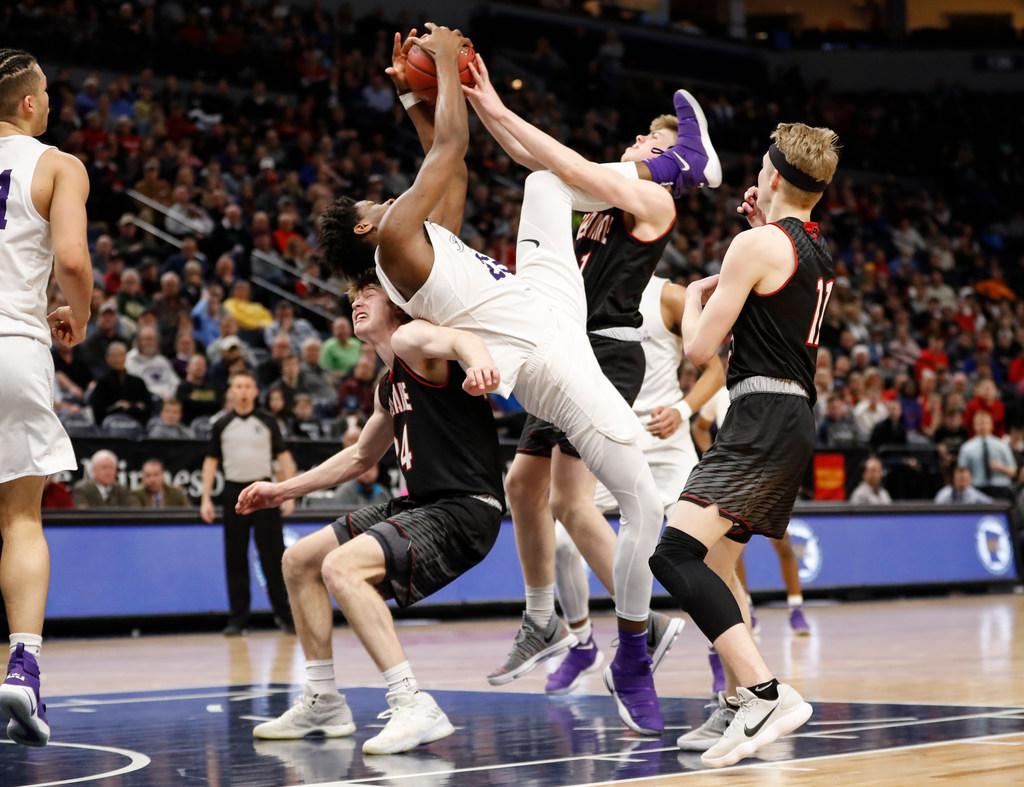 Cretin-Derham Hall forward Daniel Oturu (25) got tangled with Eden Prairie forward Connor Christensen (24) and guard Drake Dobbs (11) in a struggle for a rebound in the second half. Photo: RENEE JONES SCHNEIDER ¥ renee.jones@startribune.com

When it mattered, Cretin-Derham Hall leaned on the one thing Eden Prairie couldn’t account for: Daniel Oturu.

The 6-10 center took over the game in the second half, lifting the Raiders to a 60-56 victory over the Eagles in the Class 4A semifinals Thursday at Target Center. The future Gopher scored 19 of his game-high 24 points in the second half, helping hold off a strong Eden Prairie charge in the game’s final minutes.

“I’m not John Wooden, but yes, we wanted to get the ball into him,” Cretin-Derham Hall coach Jerry Kline said.

Oturu was frustrated in the first half by Eden Prairie’s relentless, active defense and the play of his counterpart, sophomore Austin Andrews. Oturu made it his mission put the Raiders on his back after a scoring just five first-half points.

“I was frustrated by some of the calls, but I learned over the years to just forget about it and keep playing,” Oturu said. “I knew they couldn’t stop me.”

With its aggressive mentality, Eden Prairie matched Cretin-Derham Hall for most of the first half, taking a 24-21 lead with 4:10 left.

That’s when Cretin-Derham Hall went on a pivotal 10-1 run without Oturu and 6-8 forward Sy Chatman, both of whom were on the bench in foul trouble, and Jaeden King, who was nursing an ankle injury. Point guard Ryan Larson ran the offense with aplomb and the Raiders built a 31-25 halftime lead.

“It all starts with this guy right here,” Kline said, jerking his thumb at Larson, who was seated next to him. “He’s our quarterback on the floor.”

Larson said playing with three substitutes at a crucial point of the game was just business as usual.

“It all comes down to playing basketball,” said Larson, who finished with 18 points and seven assists. “My team needs to score, whether it’s from me or from role players. We knew they could do it.”

Eden Prairie trailed by as many as 14 points in the second half, but rallied on the strength of three-point shooting. The Eagles cut the lead to 57-56 with 1:11 to go, but Oturu closed out the game with three free throws and one clutch defensive rebound.

“We made a run, they made a run,” Kline said. “It was two heavyweights going at it. We just found a way to get it done in the end.”

Cretin-Derham Hall, leaning on towering Daniel Oturu, survived relentless Eden Prairie Thursday with a 60-56 victory in the Class 4A semifinals.

Oturu, saddled with two fouls early, scored 19 of his 24 points in the second half and added 12 rebounds in the game.

Eden Prairie trailed by 14 points in the second half but rallied and cut the deficit to one, 57-56, but that was as close as the Eagles could get.