Jarvis Thomas Omersa remains a force after return to Orono

He moved to Las Vegas briefly with his mother before his junior season. 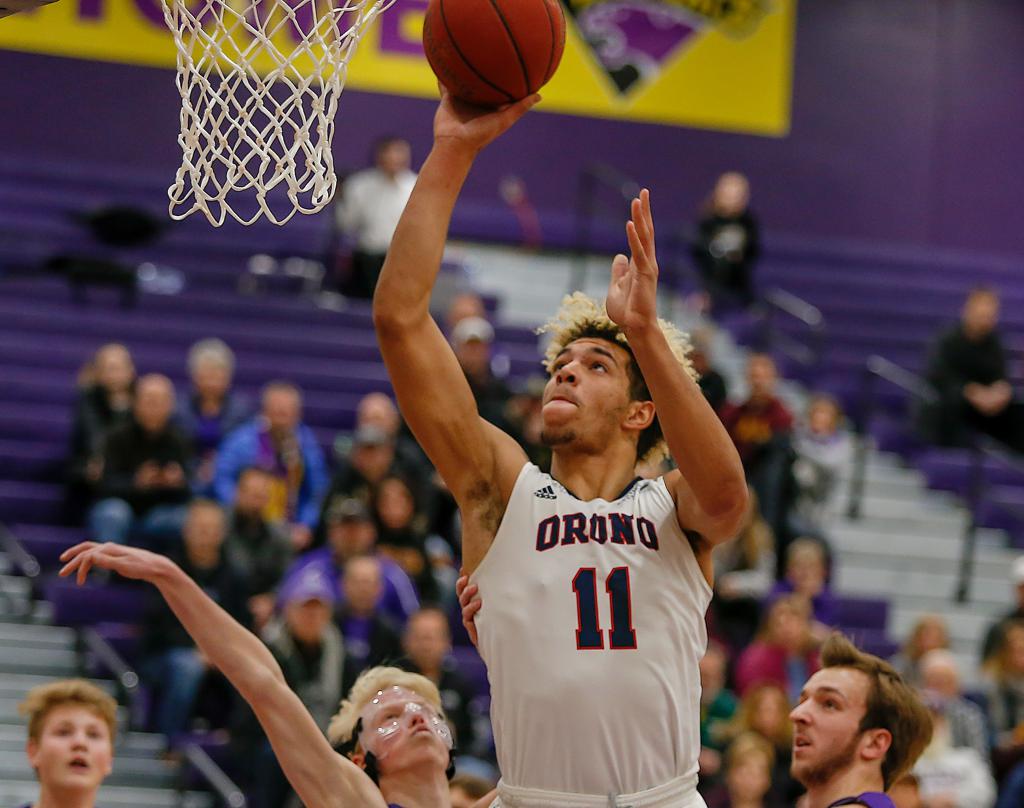 Orono basketball coach Barry Wohler thought he had lost one of his top players for the 2016-17 season — until he picked up his cellphone.

The call was from Jarvis Thomas Omersa’s mother, Sara. She and her son had moved from the Twin Cities to Las Vegas, but she was calling to tell Wohler that the two were coming back to Minnesota, where Jarvis would re-enroll at Orono High School.

The transition back to the basketball team was seamless. Omersa is now a three-star recruit, according to recruiting website 247Sports, and signed in November to play for the Gophers next season. Heading into Orono’s game on Friday, the 6-8, 220-pound forward was averaging 20 points and 11.6 rebounds per game for the Spartans, who started the season 11-5.

“It was more about me,” Sara said, regarding the move to Las Vegas. “I got a really good job opportunity that I couldn’t turn down and wasn’t going to. I can’t say that he was so happy when we were out there. In my heart, now I know, he wasn’t.”

Omersa’s great aunt and uncle died from carbon monoxide poisoning while he and his mother were in Las Vegas. Their deaths led them to want to be closer to family in Minnesota.

He decided to return in the fall of 2016 to Orono, the school he had planned to attend for his junior season before leaving for Las Vegas. Jarvis had played basketball during his freshman and sophomore years at Tartan High School in Oakdale before transferring to Orono that spring, he said.

He also played in the summer for Howard Pulley, an AAU team in Minnesota. On the Howard Pulley team, Omersa teamed up with Daniel Oturu of Cretin-Derham Hall and Gabe Kalscheur of DeLaSalle. Both also have signed with the Gophers. The trio make up the entire Gophers’ 2018 freshmen class.

He also played alongside Tre Jones of Apple Valley. Omersa said he tried to get Jones. “I was telling [Jones] ‘come home, bro, come home,’ ” Omersa said. “We’d be just as good as any of the other teams he plays and we’d all play together.”

Before he committed to the Gophers, Jarvis decided to change his last name from Thomas, his father’s last name, to Omersa, his mother’s name. He has made Thomas his middle name.

“[My father] isn’t really in my life that much, so I didn’t feel like I needed to have his last name,” Omersa said. “I felt like I could do something, and since I don’t really have to rep my father’s last name, I could rep my mom’s and carry out our last name.”

On the court this season, Omersa looks to lead the Spartans to the Class 3A state tournament. On Tuesday at Waconia, he scored 27 points in a 85-55 rout, some on breakaway dunks. Whenever he picked up fouls, though, he was met with derisive applause from Waconia fans.

“Everywhere we go, people always seem to know who Jarvis is,” Wohler said. “When we go somewhere, they ride him. But usually, after the game, students want to take pictures with him.”

Wohler, a former Gophers basketball player himself, said he was hoping Omersa would go with Minnesota.

“He had a lot of offers out there, but he kept telling me he was hoping to get that Gopher offer,” Wohler said. “If you grow up in Minnesota and the Gophers offer you, it’s a pretty big deal.”

“He sees an obstacle, he’s going to push through it,” Codute said. “I feel like he’s really determined of his goals and pursuing them.”

Jack White is a University of Minnesota student on assignment for the Star Tribune.