Coleman steps out of brother's shadow 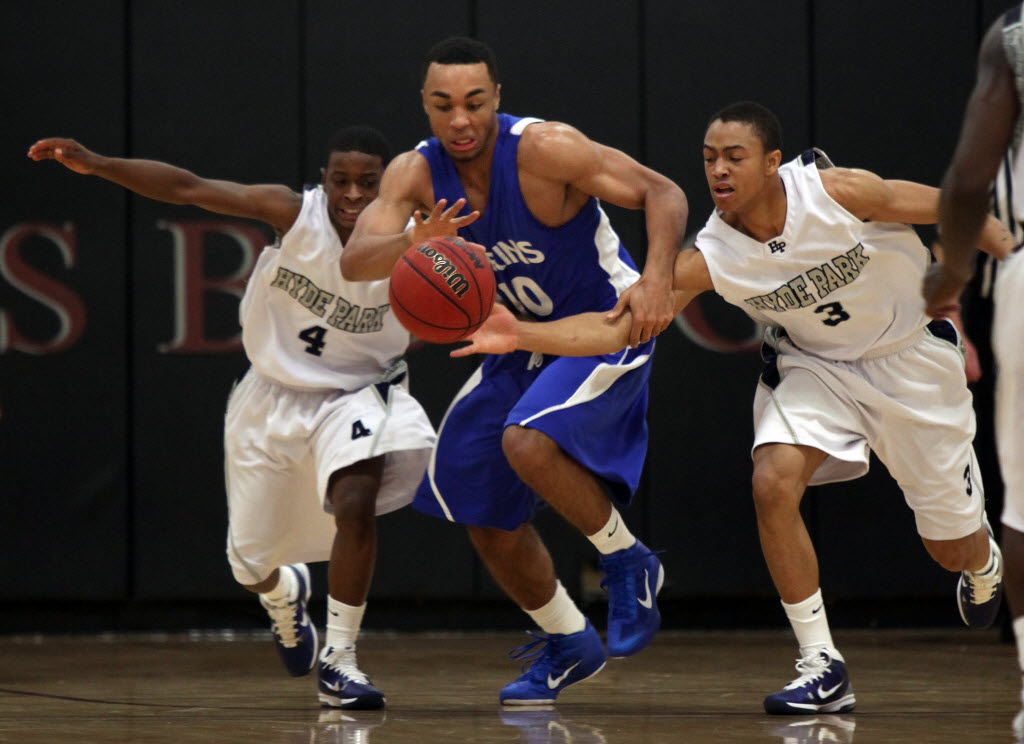 Hopkins Joe Coleman stole the ball from Hyde Park's Marcellis Davis during the first half of a December game. Kyndell Harkness, Star Tribune

Perhaps he couldn’t have guessed Hopkins would be gunning for its third consecutive Class 4A boys’ basketball championship starting Wednesday, but he’s had his eye on landing dominant shooting guard Joe Coleman for more than three years now, predicting a successful future for the 6-4 senior even then.

Coleman — who led his team by averaging 21.8 points per game, earning him this year’s Star Tribune Metro Player of the Year award — stands at the brink of forcefully capping his high school career and jump-starting a new one at the University of Minnesota.

Smith’s first adoring glance at Coleman was back in the fall of 2007, when Joe’s brother, Dan, was a senior forward at the U. The coach knew then he wanted the younger Coleman to be a Gopher one day.

“He would come in with his brother at six in the morning and they’d be working out,” Smith said. “It was amazing to see his work ethic. Right away, I just offered. I said, 'Hey, I want to coach you.’”

Obviously, that would be much further down the line. But Smith had plenty of opportunities to watch the young Coleman grow and change from that eager young boy to the strong and promising young man of whom Smith seems to have a never-ending string of praising adjectives — tough, fearless, unselfish, smart, controlled and committed.

Of course, there are three more major milestones on Coleman’s calendar — namely three potential games at state — he has his heart set on reaching before he can think too far into the future.

“It’s exciting to be able to go to state for the third time in a row,” Coleman said. “When I was younger, I was just hoping to make it to state and get a championship, but now it’s a reality. It’s crazy. We’re kind of making our own history, and it feels good.”

He also knows, perhaps as much as anyone, just how much intensity it takes to put together a championship season, and then do it again … and again.

“It’s really hard,” he said. “You have to make sure you don’t lose concentration for a minute. You have to focus on every aspect you execute.”

Hopkins got a small reminder of that this season, when the Royals fell behind early in a February game against Eden Prairie — its only loss of the season — and was unable to recover. On a larger scale, Coleman pointed to another a similarly dominant Hopkins team, when current Gophers senior Blake Hoffarber helped the Royals to two consecutive state championships in 2005 and ’06 before the team fell to Minnetonka in the section playoffs in his senior season, when Hoffarber was named Mr. Basketball.

“You just have to come out ready to play every game,” Coleman said.

That experience, Smith said, only bolsters Coleman’s potential to recharge the Gophers after they failed to qualify for postseason play this year.

“He’s playing for his third state championship right now,” he said. “So he’ll come in with a winning attitude … and that’s always healthy.”

Smith said Coleman should slide right into the fast-paced, aggressive style of play he wants to put a greater emphasis on next season. He projects the Hopkins standout to play either shooting guard or small forward, and said he could see him making an impact early on a team that struggled offensively last season and was second-to-last in the league in scoring.

“He’ll earn it like everyone else,” Smith said. “But if he’s good enough to start, I don’t mind starting him. He’ll rise to the top. There will be competition, but the competition will make him better. I can see him earning a lot of minutes next year.”

Past Metro Players of the Year

STAR TRIBUNE ALL-METRO TEAMS
The top five metro players for the 2010-2011 season, along with the second- and third-team choices here.