Scoggins: Keeping up with Tre Jones no easy feat

Tre Jones continues to blaze his own path — a similar path of excellence — and managed to one-up his brother, Tyus. 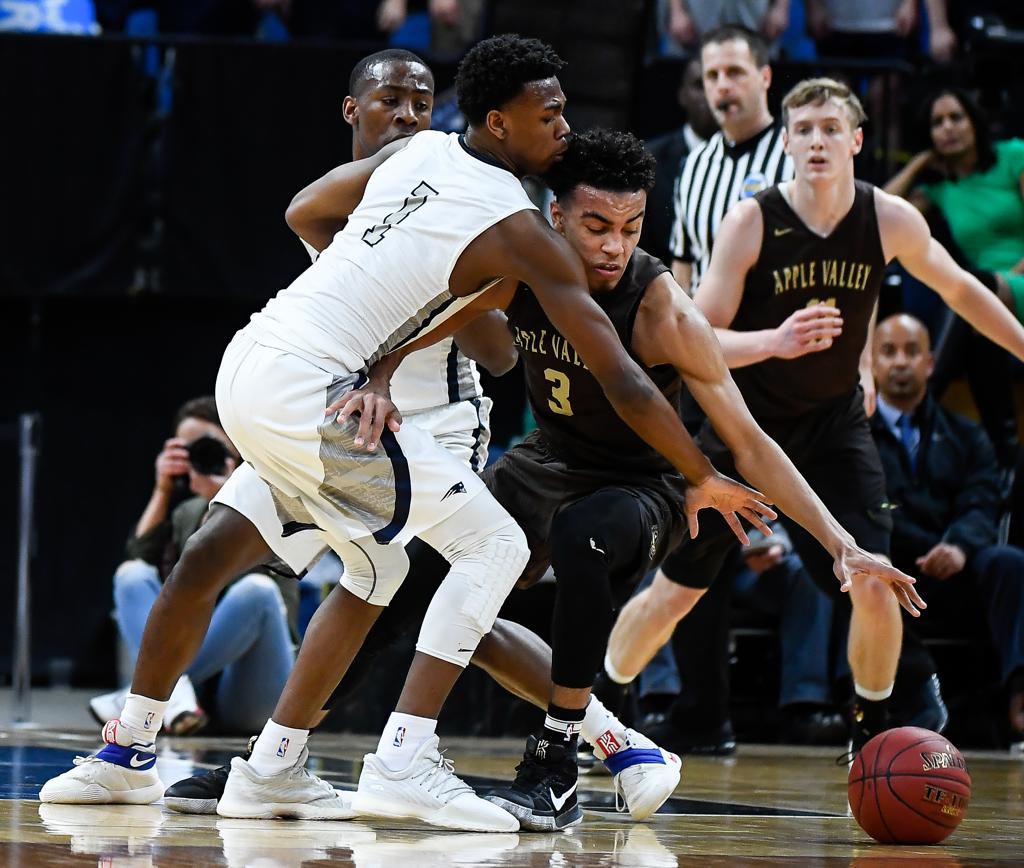 Oh, he will always been Tyus Jones’ little bother. Can’t escape that. Not that Tre even cares about being known as the little brother to a former basketball prodigy and current NBA player.

The younger Jones continues to blaze his own path — a similar path of excellence — and managed to one-up his brother in one important area Saturday night.

Tre added another state title to his resume after leading Apple Valley to a 60-54 victory over previously undefeated Champlin Park in the Class 4A championship at Target Center.

Tre now has two state titles. Tyus finished his brilliant career with one.

So much for that shadow.

“He’s once in a lifetime player,” Apple Valley coach Zach Goring said. “People ask me all the time if he’s as good as his brother. He’s right there neck-and-neck. He’s a tremendous player in the way he can dominate a game.”

Jones put that quality on display in the final minute with the championship up for grabs.

He scored on a layup to give Apple Valley the lead for good. He grabbed an offensive rebound on a missed free throw. He assisted on a layup after breaking down the defense with his penetration. He finished his flurry with another rebound and another assist.

He was everywhere and everything to his team’s final push.

“I was just trying to do whatever I could to bring this team to victory,” Jones said.

He accomplished that by finishing with 24 points, 18 rebounds, five assists and one block while playing all 36 minutes.

Jones’ performance gave him a decided edge in a marquee point guard matchup against Champlin Park’s McKinley Wright, the Star Tribune Metro Player of the Year.

Wright experienced shock before the game even started. In a remarkable display of unfortunate timing, Wright learned that his expected future college coach, Dayton’s Archie Miller, had been hired by Indiana a few hours before the game.

Not the most ideal scenario for a young man preparing for the biggest game of his life. Apple Valley’s student section was happy to remind Wright by chanting “Indiana” when he shot free throws.

Miller’s departure from Dayton created ripples here in Minnesota. Most pressing, how would the news affect Wright’s focus for the championship game? Secondly, what does Wright do for college now?

He could stick with Dayton or ask for his scholarship release. It took about three seconds after news leaked before Gophers fans started to wonder if Wright could stay home and play for Richard Pitino. That scenario seems unlikely because Pitino already signed his point guard of the future in Isaiah Washington of New York.

Wright didn’t outwardly appear distracted once he stepped on the court Saturday night, but he didn’t dominate in his usual way, finishing with only 14 points on 4-of-15 shooting. Jones deserves credit for keeping Wright’s quickness mostly under control.

“Against one of the best point guards in the state, he was able to really lock him up and contain him,” Goring said.

Jones looks unburdened by being Tyus’ little brother. In fact, any comparisons between the two don’t seem unfair or far-fetched.

Tyus was more polished offensively, especially as a shooter. Tre is better at defense and rebounding.

Champlin Park’s student section tried to get into Jones’ head by chanting “brother’s shadow” during one of his free-throw attempts.

“I’ve heard it my whole life,” Jones said. “I can’t do anything about it. I’ve just got worry about myself and try to be the best player I can be.”

“He’s not in his brother’s shadow,” Morse said.