4A: Desperation heave at the buzzer lifts top seed Champlin Park over Chaska

Sam DuBois made an off-balance three-point shot in to give the Rebels a 53-50 victory. 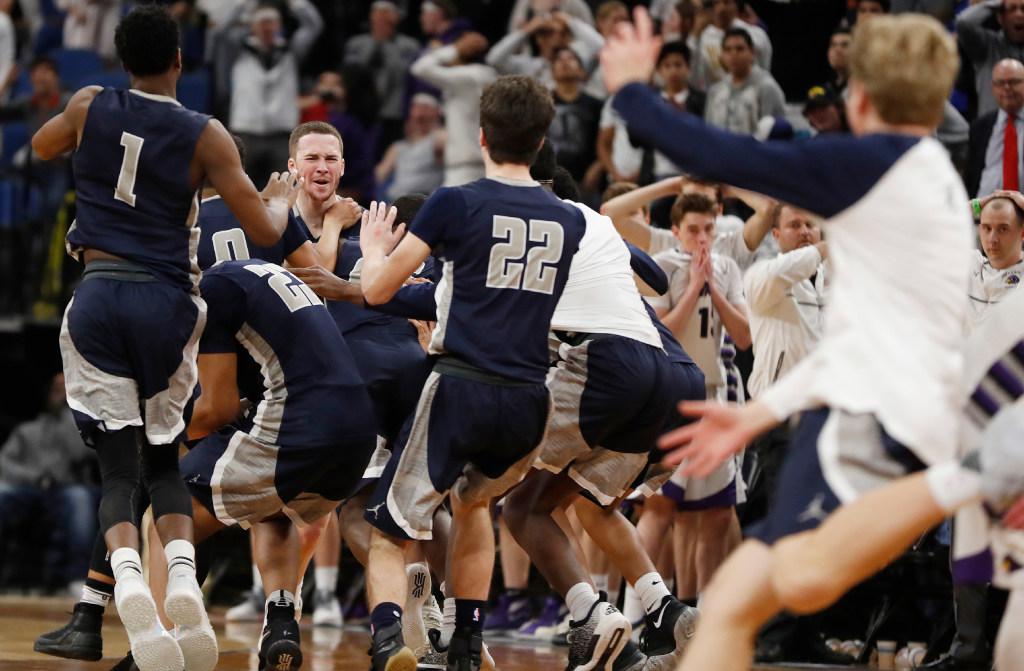 Sam DuBois (facing camera) is mobbed by Champlin Park teammates after his game-winning three-point shot at the buzzer against Chaska in the Class 4A quarterfinals Wednesday at Target Center. Photo: JERRY HOLT • jerry.holt@startribune.com

Sam DuBois picked up a loose ball, turned and flung. What the Champlin Park lefty’s shot lacked in form, it more than made up for in drama.

DuBois heave -- from a few feet beyond the NBA three-point line -- settled softly into the net as time ran out, rescuing No. 1-ranked Champlin Park from an unthinkable first-round exit with a 53-50 victory over Chaska on Wednesday in the Class 4A quarterfinals at Target Center.

“That’s the biggest I’ve ever made in my life and it’s not even close,” DuBois said.

As the undefeated top seed in the Class 4A tournament, and with a heartbreaking loss in the 2015 Class 4A championship game still lurking in the backs of their minds, even the Champlin Park players admitted to feeling pressure going into Wednesday’s game.

That, said Champlin Park center Theo John, was a big reason the Rebels weren’t sharp against the aggressive Hawks.

"Each and every day, we feel like we have to go out and prove something,” John said. “This morning, we just weren’t awake. We weren’t on our game.”

Chaska closed the first half with a 10-2 run to take a 30-22 halftime lead, which they maintained for most of the second half.

That may have spelled doom for lesser teams, but Champlin Park has McKinley Wright, the reigning Star Tribune Metro Player of the Year, and the senior guard led the Rebels' second-half rally. Wright scored 30 points in the game, 18 after halftime, getting to the basket every time the team needed a boost.

With the game tied 50-50 with time running out in the second half, Champlin Park slowed down the game, not wanting to give Chaska, which had made 9 of 21 three-point attempts, a chance for a winning basket.

With five seconds left, Wright slid left down the lane, but his pull-up 10-footer missed. John, who finished with 11 points and 16 rebounds, tapped the ball toward mid-court, where DuBois hauled it in and hit his game-winner.

“I saw Theo tap the ball out and, at first, I was running to it to make sure they didn’t go down and get an easy layup,” he said. “I caught it and put it up and it fell. Even when you’re a little kid, shooting into a trashcan, you think ‘5-4-3-2-1’. You never think it’s actually going to happen, though.”

For Chaska, it was a crushing ending to a game the Hawks could very easily have won.

“The hard part is that we haven’t lost since Jan. 20,” Kallman said. “I’m really glad the high school league added a consolation bracket because these guys didn’t deserve to end their season that way. They deserve to get out there and battle again tomorrow.”

Andrew Kallman finished with 18 points and Myles Hanson 12 for Chaska.