Lakeville South's Jack Sorenson has rhythm to go with records 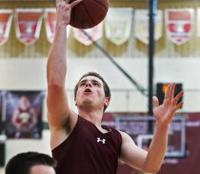 Jack Sorenson, a senior guard for Lakeville South, holds a handful of Cougars&#x2019; career records already and is closing in on 2,000 points, which would give him the school scoring mark.

The 5-foot-11 Sorenson has averaged 20 points per game since his freshman year, so it is likely he will become Lakeville South’s all-time leading scorer this season.

He also has a chance to become the program’s leader in career rebounds as well.

By season’s end, Sorenson should be at the top of every statistical category in Cougars history.

Despite his impressive numbers, Sorenson has yet to sign or commit to a college and did not make Breakdown Sports’ preseason Mr. Basketball watch list.

It probably didn’t help that Sorenson hurt both of his ankles in July while playing with D1 Minnesota basketball.

He said the injuries kept him off the court at the start of the school year and is a reason colleges are waiting on him.

Him getting readjusted on the court has also contributed to Lakeville South’s slow 3-6 start.

“My ankles hurt me,” Sorenson said. “Some of the [college] teams I was going to go to took other guys ahead of me. So I am just waiting and trying to be the best I can be. If I have to go junior college, maybe I’d do that. Or I am hoping a team wants me at the end.”

The college program where he lands will get a rhythm-shooting, prolific-scoring basketball junkie.

He grew up watching his brother, Brett, who is 10 years older, play year-round basketball, from winters with Lakeville South to AAU seasons with the Minnesota Magic.

Tom Krosschell, executive director of D1 Minnesota Basketball, coached both Sorensons and remembers Jack being around the older players as much as he could.

Sorenson was only 6 years old, but he was obsessed with the game. Krosschell said it was clear even back then that the younger Sorenson was going to make a name for himself on the court.

“He is a total gym rat and always wanted to be around the game,” Krosschell said. “I coached his brother for two years, and I don’t recall [Jack] missing a game. He would sit on the bench with us back when his feet couldn’t even touch the ground.”

After absorbing all he could from his brother’s games, basketball quickly became Sorenson’s life. When he was 11 years old, a three-minute YouTube video of him performing dribbling drills — two balls at once — hit the Internet and has generated nearly 4,000 views.

Three years later as an eighth-grader, he played in his first varsity game and carved out a role coming off the Cougars’ bench.

Once after an AAU practice two years ago, Sorenson made 126 consecutive free throws with his coach present. He says he could have made a lot more, but a janitor came in and kicked him off the court before he could take his 127th shot. It was nearly 10 p.m. and the janitor needed to lock the gym.

“He is really easy to rebound for,” Lakeville South coach Nick Gruhlke said. “You just stand underneath the net and pass him the ball.”

Sorenson’s rhythm shooting makes him one of the top marksmen in the state. This year, after a 73-58 loss to East Ridge, Raptors coach Paul Virgin said Sorenson is “one of the best players” he had seen in a long time.

Despite Sorenson’s scoring and playmaking ability, Lakeville South has struggled to get past the state’s top talent. Last year the Cougars’ 17-9 season ended in a section semifinal loss to Rochester John Marshall.

The regular season this season includes another tough South Suburban Conference schedule, including top-10 teams Apple Valley and Lakeville North. Playing outside the conference has been tough, too, with the Cougars suffering double-digit losses to Wayzata, Maple Grove and Hopkins.

The postseason gets no easier, as Section 1 of Class 4A includes Lakeville North and John Marshall.

“The points, they are good, but we have had one winning season with me on the team so that is what I really want,” Sorenson said. “Just to win.”