St. Thomas Academy athlete with cochlear implant succeeds on and off court

Using devices that overcome his hearing loss, Eddie Perry has a mission to help others in developing speech. 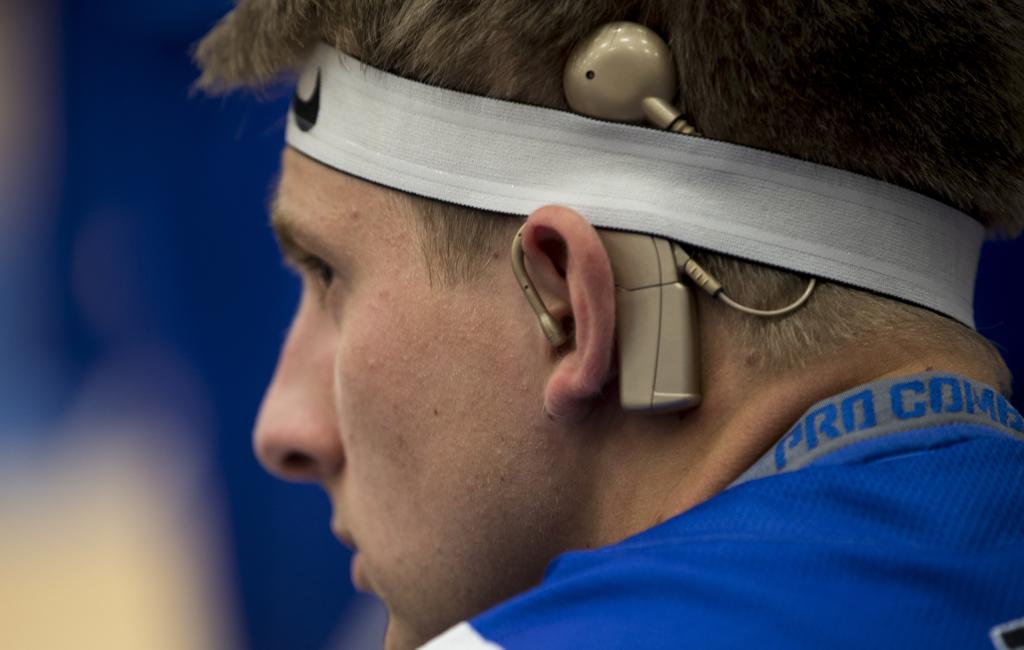 St. Thomas Academy athlete Eddie Perry is required to wear a headband to keep his hearing aids secure to his head.

When St. Thomas Academy senior Eddie Perry prepares for a basketball game, his gym bag is loaded with equipment that none of his teammates carry: extra cords, batteries, a backup hearing aid, even an old cochlear implant.

If the cochlear implant in his left ear or the hearing aid in his right ear were to fail during a game, Perry would lose his ability to hear.

Perry received the implant as a toddler, after his parents discovered their youngest of three children could not hear as he crawled toward the family Christmas tree. The implant not only opened up the hearing world to their son but it provided him the ability to develop his speech.

Through years of speech training, which concluded in seventh grade, Perry developed complete communication skills, applying them well enough in school to carry a 3.6 GPA. He developed as an athlete, too, initially building confidence to overcome his reserved demeanor as a child. He played club soccer with the Minnesota Thunder Academy through high school, earning a scholarship to play Division I soccer at DePaul.

Pedro Braz, the men’s soccer coach at Gallaudet University, said Perry will be the only Division I soccer player with a cochlear implant. Gallaudet, in Washington, D.C., is a college for deaf and hard of hearing students.

Playing in his second full varsity basketball season, Perry is a key member of the Cadets’ second unit and is routinely one of the first reserves to enter the game.

“I always had to work harder than everyone else,” said Perry, who volunteers in programs for children with hearing loss. “It was not necessarily frustrating, but it kept me motivated. My work ethic is just higher because it is something I have always had to do and it comes naturally.”

As Perry grew up, his school days were unlike those of his peers. He often worked one on one with a speech teacher to hone his skills. But Perry said the lessons didn’t end just because the classes did. Even now, if he says a phrase wrong or mispronounces a word, his family and friends quickly correct him.

Playing sports poses a different challenge. Perry relies on lip reading and hand signals to communicate, in addition to his cochlear implant and hearing aid. He sits near his coach on the bench. Loud gymnasiums often make it difficult for Perry to distinguish where sounds are coming from.

“I hardly even notice it,” Cadets coach Jason Birr said. “That is how good of a kid he is and how good he is at making adjustments. Very rarely do I have to repeat myself or yell louder.”

Early on his mother, Missy Perry, got him into tee ball, the first of many sports he tried, to help her quiet son acclimate socially. Perry never shied from competition. He said he used sports to gain respect and build relationships more easily.

These days Perry’s ability to blend in is a testament to the work he has put in to deal with hearing and speech concerns. He is living what most would consider a normal high school life filled with sports, family and friends.

For the first 13 months of Eddie Perry’s life, his family did not know he was deaf. They had their concerns at times because he did not react to certain things the way a typical infant would. But the possibility of him being unable to hear was a distant thought.

One evening in late December changed everything.

Eddie Perry was crawling toward the family Christmas tree and his mother began calling out to him to get his attention. Eddie didn’t react. His mother banged a couple of kitchen pans together near his ears. Still, no reaction.

Missy Perry said she remembers being at the hospital, staring at the flat line on the monitor screen during the test, a result that meant her son was deaf.

“It was definitely a shock, ” Missy Perry said. “You realize that your child’s life is going to be very different in a lot of different ways.”

After telling her family the news, she began doing research and weighing her son’s options. After the test Eddie had received hearing aids for both ears. But to develop any speaking skills, a cochlear implant for his left ear was his only hope.

The surgery for Eddie, then 18 months old, was successful. Missy Perry enrolled her son at Northern Voices, a Roseville program that helps young children with hearing loss learn to communicate through speech.

Northern Voices became a staple of Eddie Perry’s life. He attended classes daily until he was halfway through kindergarten. His speech skills had progressed enough for him to enroll in a traditional education school, St. Jude of the Lake in Mahtomedi. But he still needed daily speech classes. Those ended before he enrolled as an eighth-grader at St. Thomas Academy, following his older brother.

Giving back a priority

Last summer, Eddie Perry got the opportunity to give back to Northern Voices. Angie Schnellman, who taught Perry there when he was 5 years old, said having him back last summer was a highlight for the enrolled children.

Some of Eddie’s closest friends even volunteered with him to help them understand more about his unique childhood.

“The kids absolutely adore him,” Schnellman said. “He has implants and hearing aids just like them. The kids think it is cool to see an adult with a hearing aid or an implant. They do not get to see that very often.”

Eddie has made it a priority to give back to the deaf community. He spent 15 days and close to 70 hours at Northern Voices last summer. He also works with the Tony Sanneh Foundation and volunteers at its youth soccer camp for children with hearing loss.

Perry considers his volunteering a calling. The more he achieves both athletically and academically, he said, the greater his platform to give back.

At DePaul, though his major is undecided, he plans on minoring in deaf studies and learning sign language.

“I am someone they can look up to,” Perry said. “Even parents can look at me and see that their kids can grow up and everything can be OK. It is awesome to see kids look at me and say ‘Wow. You have an implant, too.’ ”