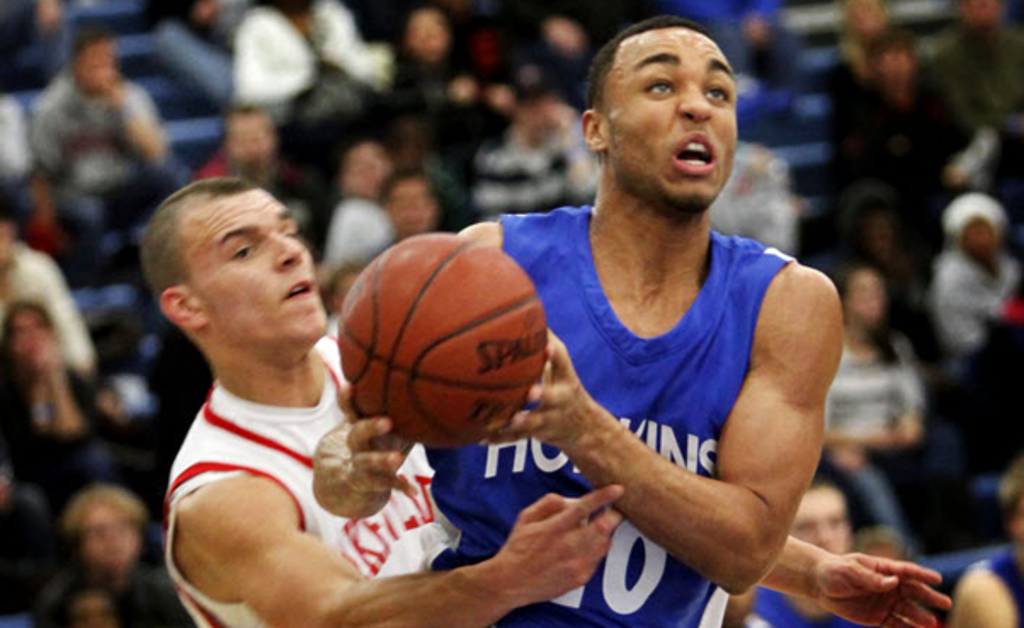 On any given night in the winters of 2001 and 2002, Dan Coleman could glance up from basketball practice inside the Hopkins High School gym and see his little brother Joe – then a grade-schooler – squirming restlessly in the empty stands.

"I knew it didn't seem easy, but I wanted to be out there," said Joe, now a senior star on the Hopkins team, thinking about those countless nights watching the "big boys" play, and longing to be out there with them.

But Dan didn't let the dream stay too distant. After practices, he would stay with little Joe and start Practice No. 2: teaching his brother the game of basketball, inside and out. At the time, the younger Coleman would groan a bit. In awe of watching players like Kevin Garnett dominate on TV, he just wanted to dribble back beyond the arc and rain three-pointers.

He remembers those hours of grueling instruction differently now. On the heels of winning two consecutive state championships with Hopkins, and on the cusp of playing for the University of Minnesota after signing a letter of intent last month, Joe Coleman sees that the hard work, the long nights and hour after hour of practicing that lefthanded layup are finally paying off.

"Some of the time we spent at the gym was not really a happy memory for me or Joe," said the elder Coleman, a fomer Gopher who now plays in a French pro league. "Basically, I would train him like I would train myself, and so he was exposed to basketball at a high level from a young age. ... He did not like it then, but he thanks me now."

And with all he's accomplished – rising from an average player to one who eventually mulled offers from multiple Division 1 schools, including Santa Clara and Iowa State – he has plenty of reason to thank him.

"There was never an easy way out with him," Joe said with a laugh, as he thought back to the seamless string of days that extended into Dan's years at the U, where he would bring Joe around campus and to the weight room. "We were always doing something on the court. Whenever he'd get done with practice, on weekends ... whenever he was at the gym, I was with him. Everything I've done was taught through him."

It seems the work ethic stuck. In his three years on the Hopkins basketball team, Joe has become known for his intense dedication to the sport, with his head coach Ken Novak saying there isn't a day when Coleman isn't at the gym, perfecting his shooting and ball handling.

And his hard work shows.

After contributing modestly off the bench in Hopkins' 2009 championship, the athletic guard played a key role in delivering their second, scoring 70 points and adding 27 rebounds in three state tournament games.

"He's one of those kids that realized all the hard work, how much effort you have to put into it. He's always working on his game. And you can see him processing, analyzing what he needs to do. He's got incredible focus, and that's what's allowed him to improve quicker than the average guy."

But Coleman said that's merely the way at Hopkins, which is known for churning out Division 1 players, including four of the starting five two years ago. Coleman lives in Minneapolis, but like many high school athletes before him, sought out Hopkins for the basketball program's prowess.

"Being out here in Hopkins, you're just in an environment where everybody works hard," he said. "The players who have come before you worked hard. And eventually, it just adds up, and you end up being a better player because of it."

Of course, Coleman isn't satisfied with making it this far. This season, he's focusing on improving his shooting and improving his outside game, having been an aggressive inside player for most of his high school career.

But as much as he's looking forward to that "college ball" feeling, Coleman's not rushing to miss out on all of the things that come with a high school senior season – especially on a team that's ranked No. 1 by the Star Tribune after returning Coleman and fellow senior, Marvin Singleton, who just signed with Northern Iowa.

"I'm looking forward to just getting better every day," Coleman said. "I'm really anxious to be out there [at Minnesota]. ... I wish I could be playing right now, but I just gotta wait my turn."