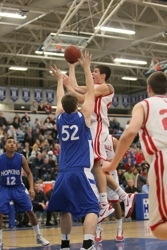 With every victory, with every championship, the target just keeps getting bigger.  But so far, the Hopkins boys have been able to handle it.  Despite with they described as a subpar game, the Royals held on to beat Lakeville North, 73-57, in the finale of the Breakdown Sports Tip Off Classic Saturday night at Hopkins.

Coleman netted 18 points in the first half as Hopkins built up an 11-point lead.  The Royals maintained that lead in the second half, but couldn't put the Panthers away.

"We just have to come out and play hard every game," said senio forward Joe Coleman, who scored a game-high 31 points to keep the Royals humming.  "You can't take breaks in a game or you're going to lose.  We kind of let up tonight, but we have to make sure we can't do that the rest of the season."

"We have a lot of different scorers and we can score in different ways," said Coleman.  "We just have to make sure we attack it."

Despite the big offensive night, Coleman was more focused on the team's defense.  He knows it's the key to a successful title run, and although the Royals held North to 57 points, Coleman saw room for improvement.

Player of the game 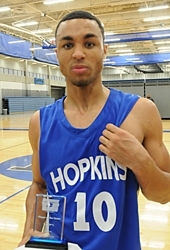 Joe Coleman, Hopkins
With the rest of the Hopkins offense struggling at times, Coleman took charge as he is wont to do.  The 6-foot-4 senior forward poured in a game-high 31 points, including 18 in the first half as the Royals built up an 11-point lead and hung on.  Coleman, the younger brother of former Gopher Dan Coleman, hit 5-of-6 free throws and 13 field goals.  His athleticism and talent was apparent on numerous occasions.