Totino-Grace has parlayed a defense-first approach into a 12-3 start that feeds on intensity. 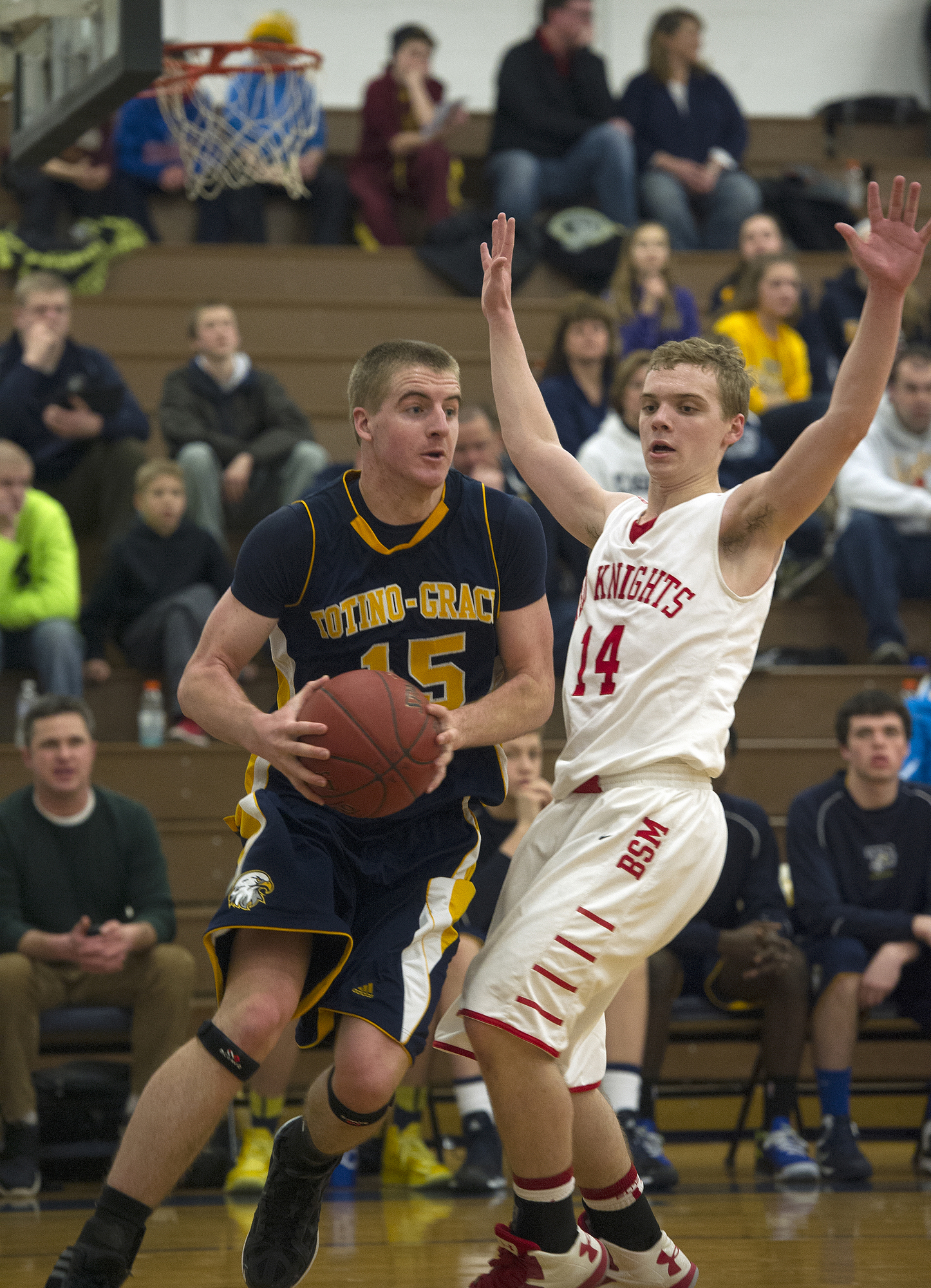 Mottos come and go. Game plans are modified throughout a season. But an identity has staying power.

The Totino-Grace boys’ basketball chose defense as its identity this season and positive results followed. Entering this week with a record of 12-3, the program is off to its best start in coach Keven Seim’s five seasons.

“We asked kids, ‘What do we want our calling card to be?’ ” Seim said. “Defense is something they’ve taken a hold of. They work hard and get after it.”

Of course, Totino-Grace boasts some strong offensive numbers. Senior guard Reggie Meyer ranks among the state’s top scorers, averaging 27.2 points per game. And the Eagles soared past the century mark in a 109-67 shellacking of Princeton.

Successful defense owes to good schemes and better effort. Defense is desire and the Eagles are disciples. Said point guard Michael Waters, one of the Eagles’ most tenacious defenders, “Everyone’s willing to sell out 36 minutes every night.”

Last year’s seniors, who Seim heralded as “maybe the hardest-working group we had,” set a tone for returning players. Waters and fellow captains Meyer and senior guard Collin Fleming have tried to bring last season’s consistent practice intensity to games.

The payoff came via a 6-1 start to the season. The Eagles’ first loss came against Edina, a Class 4A opponent. But a 61-59 loss to Spring Lake Park in a game with conference and section implications got the Eagles’ attention. They squandered a four-point lead in the game’s final 60 seconds.

“We got a little too confident,” Fleming said. “We’re a good team but we can’t come in thinking we’re going to win every game.”

The resilient Eagles have taken different sorts of losses in stride. Junior guard Maxwell Walker averaged 10 points per game though the first four games until breaking his hand. A pair of guards emerged to fill the void. Junior Cole Wagner has averaged 6.4 points per game while senior Carlton Djam supplies competitive zeal.

“He hasn’t started a game all year but he’s the loudest person on the bench,” Waters said. “He’s the emotional leader of our team.”

Meyer, whose picture adorns the school’s winter sports calendar poster, is the star. His ability to score at the basket, from behind the three-point line and anywhere in between makes him a tough matchup. He said he deals with being a marked man by simply “not really changing the way I play.”

“Having Reggie there every night to carry the load offensively, we can work harder on the defensive end to get him the ball back,” Waters said.

Players believe they can bookend this season’s strong start with a similar finish. Two obstacles must be overcome if the Eagles hope to reach their first state tournament since 2006. First, they have not gotten past the section semifinals under Seim. Second, they are in Class 3A, Section 3 with two-time defending state champion DeLaSalle.

“In basketball, everyone has a chance in a game,” Waters said. “But we have to be working as hard as we can and be playing our best basketball in March.”