The Islanders, regarded as a top state team regardless of class, trounced St. Paul Johnson. 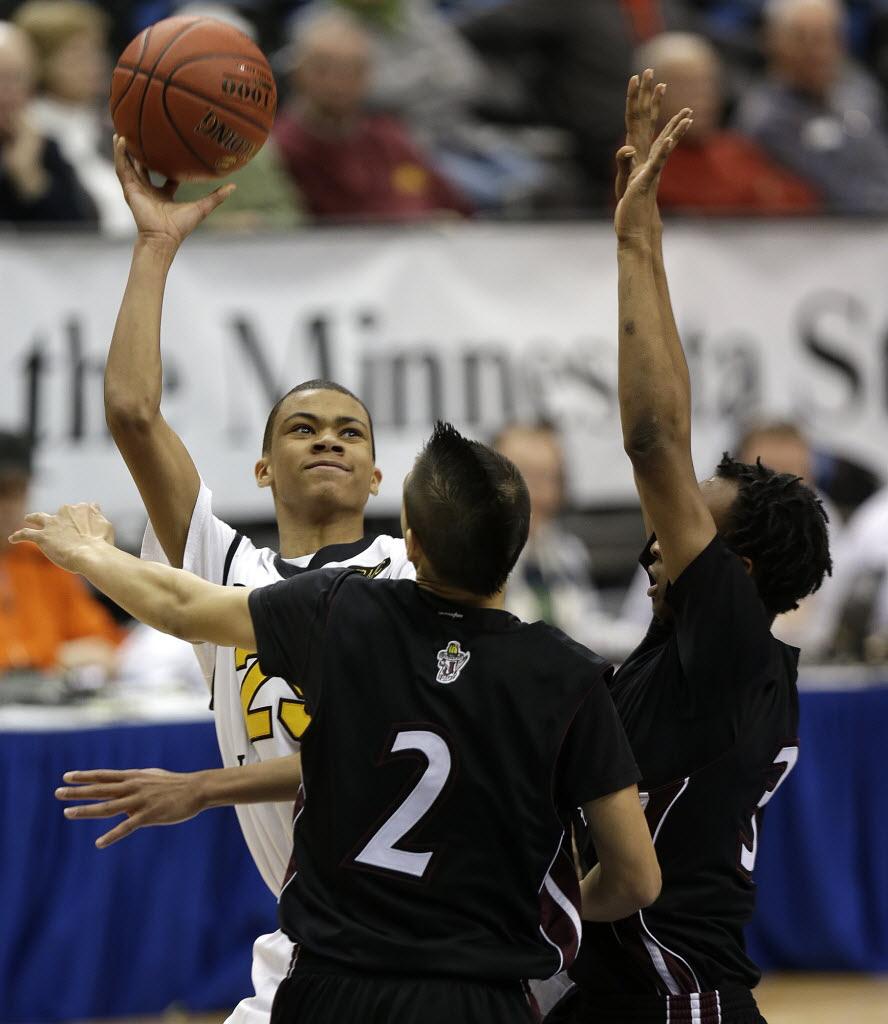 DeLaSalle's Geno Crandall tried to shoot over St. Paul Johnson's Travis Siedschlag (left) and Jalen Nobley in the first half of a Class 3A semifinal game Thursday at the Target Center in Minneapolis. Photo: ELIZABETH FLORES * eflores@startribune.com

Like all coaches, DeLaSalle’s Dave Thorson is rarely satisfied. Pleased when his team performs well, obviously, but always looking to improve.

But even Thorson had a hard time finding areas to be critical of in the Islanders’ 86-59 thumping of St. Paul Johnson Thursday in the Class 3A semifinals at the Target Center.

“It’s the state tournament. How can you not bring your ‘A’ game? I thought our entire group did that today,” Thorson said.

DeLaSalle, one of the few teams that can match St. Paul Johnson’s quickness, had the benefit of junior center Reid Travis. At 6-foot-7, with long arms and peerless athleticism, Travis scored 30 points, converting 12 of 15 field goal attempts with at least five dunks. He also grabbed 12 rebounds.

“We tried to double- down on him and couldn’t stop him,” said St. Paul Johnson coach Vern Simmons. “It wasn’t like we weren’t trying.”

And the more effort the Governors (22-8) concentrated on Travis, the more openings it left for the rest of the DeLaSalle lineup. And the Islanders took advantage.

“It’s awesome to play with Reid,” Scott said. “If they double him, we’re open. If they don’t, then he gets the ball and he’s unstoppable.”

Travis, took the accolades in stride, well aware that DeLaSalle’s next game is the last piece to defending its 2012 championship.

“It’s nice to get a win against a good team like that, but we’ve still got work to do,” he said. “Our next game is going to be hard, but we’ll be ready.”

1. Reid Travis, DeLaSalle
Johnson had absolutely no answer for Travis and he was able to impose his will for most of the game. He recorded 30 points and 12 rebounds and only missed three field goals while doing so, finishing 12-15 from the field. He threw down multiple highlight reel dunks to keep the crowd entertained. The only thing that could stop him in this game was the free throw line as he went 6-13 from the charity stripe.

2. Luke Scott, DeLaSalle
The senior is a lights-out shooter when he's hot, and he happened to be on the money today. His 15 first half points helped stake the Islanders out to a large first half lead and he finished the game with 20 points. He's more than just a shooter however, he did a great job of handling the ball and facilitating. He had no turnovers and 4 assists.

3. Quashingm Smith-Pugh, St. Paul Johnson
Smith-Pugh was Johnson's leading scorer with 17 points and second leading rebounder with 7 boards. He had the unenviable task of guarding Reid Travis despite giving up about 5 inches in height. Even while guarding the best player on the floor for most of the game, he was able to turn in a solid performance for the Govs.