With a stout work ethic and array of skills, junior Reid Travis' best appears yet to come. 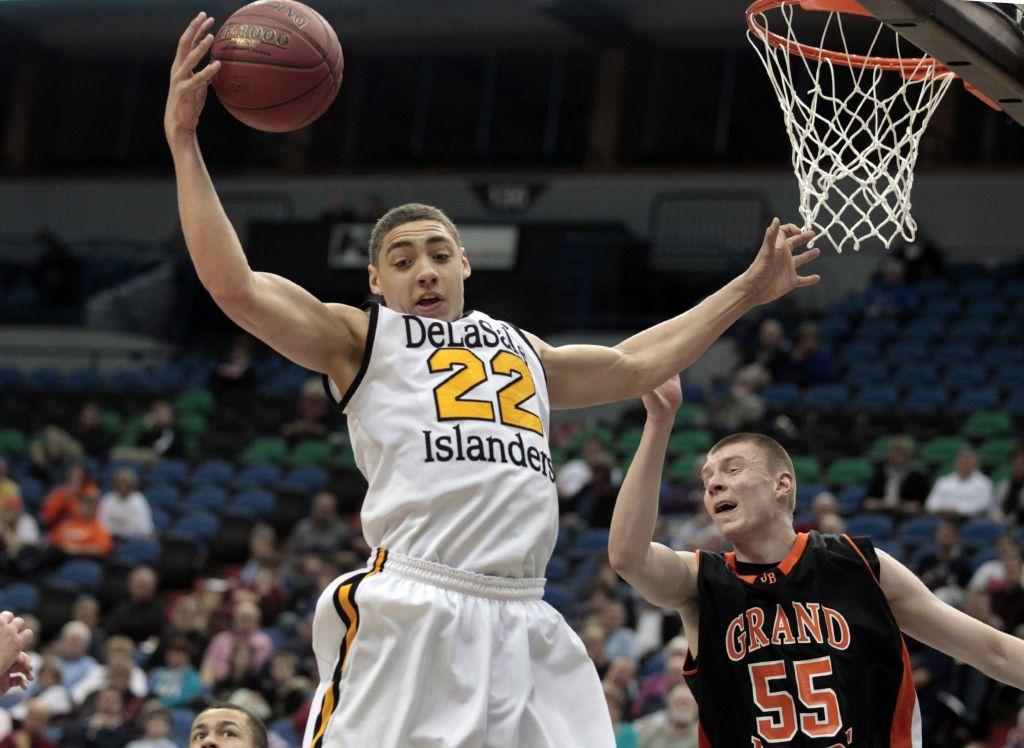 Reid Travis of DeLaSalle pulled down a rebound over Mike Spoden of Grand Rapids during last season's Class 3A state tournament.

High above the DeLaSalle court, lights shook for nearly a minute after 6-7, 230-pound Reid Travis attempted a dunk.

Everything engaged by the muscular 17-year-old, whose size, strength and basketball skills arguably are unmatched in Minnesota, requires extra time to settle itself.

"He started to lift, and now he looks like a bear," DeLaSalle senior Luke Scott said. "It's surprising how much better he's gotten. He's a beast."

Islanders coach Dave Thorson isn't surprised. He remembers Travis and his older brother, Jonah, as middle-schoolers riding their bikes to DeLaSalle to get extra practice. It wasn't long until Travis was thrown into a handful of varsity drills and regularly practiced with the junior varsity.

Thorson, who has helped develop several NBA and high-profile college players, says there's something unique about his current star.

Before an early-morning departure for South Dakota last month, Travis arrived extra early to shoot around in an empty gym. Last week during finals, he found time to get in the weight room even though Thorson had given players the day off. "Not many high school kids know that sense of urgency. When your best player is your hardest worker, that's the ultimate situation for a coach," Thorson said. "But he still sees himself as a work in progress."

The state's best big man dominates under the basket. Defends on the perimeter. Handles the ball. Scores from beyond the three-point line. He has risen into the nation's top 30 junior recruits and probably will continue to climb.

Helped by an impressive summer of basketball, he is seeing scholarship offers flow in. But they are neither as frequent nor from as many high-profile schools as fellow juniors Tyus Jones and Rashad Vaughn have attracted. Travis says he is OK with that. At least one team from every conference in the nation has made contact, he said, and as he improves, so will the offers.

Harvard, where Jonah plays, is among the interested. Travis plans to make an official visit soon. He has been spotted behind the Gophers bench during the past few months but has yet to hear "We want Reid!" chants from fans who have paid similar homage to Jones and Vaughn.

When he landed on several of the nation's top recruiting lists, he was enthralled by his status and paid it a lot of attention. He won't let that happen again, he said. Nor will he let the buzz about Jones or Vaughn affect him.

"Everyone talks about it," Travis said about the big three. "But I'm just thankful to be able to put my name in a class of those caliber of players. We're three different players on the court. It's an unfair comparison. We all do something unique, and we all do something better than the other."