A Holy Angels team manager with cerebral palsy got his wish to play Wednesday night. 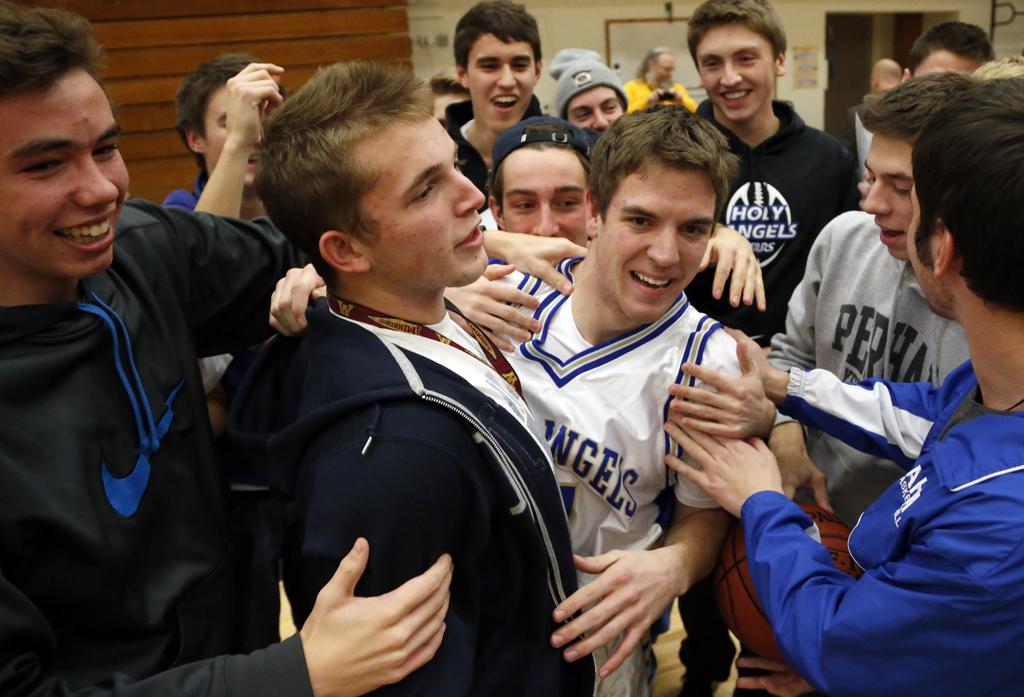 Holy Angels basketball team manager Nick Anderson was surrounded by students after playing in the final seconds of the game vs. Breck.

Nick Anderson had waited his whole life for this moment, so the 35 minutes, 36 seconds he waited Wednesday night didn't concern him.

The Holy Angels boys' basketball manager patiently sat, cheered and handed out water bottles from the end of the bench. Fulfilling these roles was normal for Anderson, but on this night he had been promised an opportunity to do something he'd never experienced.

The 18-year-old has cerebral palsy, a disability that has limited his physical involvement in sports. That changed Wednesday at Breck School. Despite offering to forfeit his chance to play because his Holy Angels teammates were in an closer-than-expected contest, Anderson entered the game to the chant of his name with 24 seconds left.

Wearing No. 41 and nervously moving around the court, Anderson touched the ball three times but never took a shot in the 75-69 victory. It didn't matter, though, he had fulfilled his dream. The spectators rose to their feet as time expired, and moments later, Anderson and Holy Angels coach Larry McKenzie embraced before falling to the ground with smiles on their faces.

"Amazing. Definitely a dream come true," an emotional Anderson said. "There is no better feeling than stepping on the court with a jersey on. This is something I've waited for my entire life."

The unusual move was partially engineered through planning by the opposing coaches -- McKenzie and Breck coach Matthew McCollister, who previously coached together -- and drew support from a Twin Cities sports advocate for people with disabilities.

Anderson was 10 months old on March 10, 1995, when his mother, Michelle Polzin, learned her son likely had cerebral palsy.

Characterized as a "miracle baby," Nick has been proving people wrong -- even her, she said -- his whole life.

Nick was born premature at 29 weeks after Michelle went into labor on an airplane. He arrived home a month before his due date. Later in his life, his doctors told Michelle that her son might never walk, or if he did, it would be with assistance. Nick, however, said he never let others' doubts affect him.

"I've walked through all this with him," Michelle said. "He has such a passion for sports, he loves it. And he's a very deep thinker. But I never dreamed he would play the game, get the chance to go out there and do it. It's incredible. He always had his determination."

Since third grade, he has been a team manager on any basketball, football or baseball team that would have him. Once enrolled at Holy Angels, the Lakeville resident continued the commitment and McKenzie eventually honored it. Anderson was named a captain of the basketball team as a junior and senior.

McKenzie also promised his student managers that those who stayed with it would get a chance to wear a jersey in a game.

"He's been more committed than guys that get the opportunity to play," McKenzie said. "After every game, the first text I get on what we can do to improve is always from Nick. He's a leader of leaders."

If Nick could play regularly, he envisions himself as a shooting guard, "like [Michael] Jordan," he said. "I want to let it fly."

Getting him into a game stemmed in part from McKenzie's friendship with McCollister. They discussed finding a moment in the game, when the outcome was not in doubt, to slow things down and give Anderson a chance to score.

Minnesota State High School League associate director Kevin Merkle said such an effort is rare but not unheard of. Regular-season events are held at the discretion of the host schools. Merkle said if the moment was right, he didn't discourage it. He acknowledged that it's become more of a national trend to provide people with disabilities a chance to experience a varsity moment.

Representatives from the Minnesota State Council of Disability were hesitant to speak on the matter, but Courage Center sports coordinator Taavasa "Jr." Mamea praised the situation. The mission of Courage Center is to empower people with disabilities to realize their full potential in every aspect of life and Mamea believes Anderson scoring would not only help him do this but many others.

"I think people that would be against that don't understand what they're trying to do for the young man," Mamea said. "I don't think it hurts what we do for advocacy. It's all about the feeling of competition, of camaraderie, of getting in to play. There is no substitute for that."

Anderson said it was never about scoring or slowing down the game for him. Rather, it was just to wear the No. 41 Holy Angels jersey. Seeking to eventually be a role model for others with cerebral palsy, he hoped his moment on the court would be interpreted as a message that anything can be achieved.

On Wednesday, he became a player-manager.

"He's done a lot and has taught a lot of people a lot," his mother said. "He always says the best advice he can give people is to get to know people with disabilities, because they're people."

Video: Nick Anderson gets his chance to play