The State of Hoops

1946-1970: Basketball was king during the Golden Era and small communities ruled 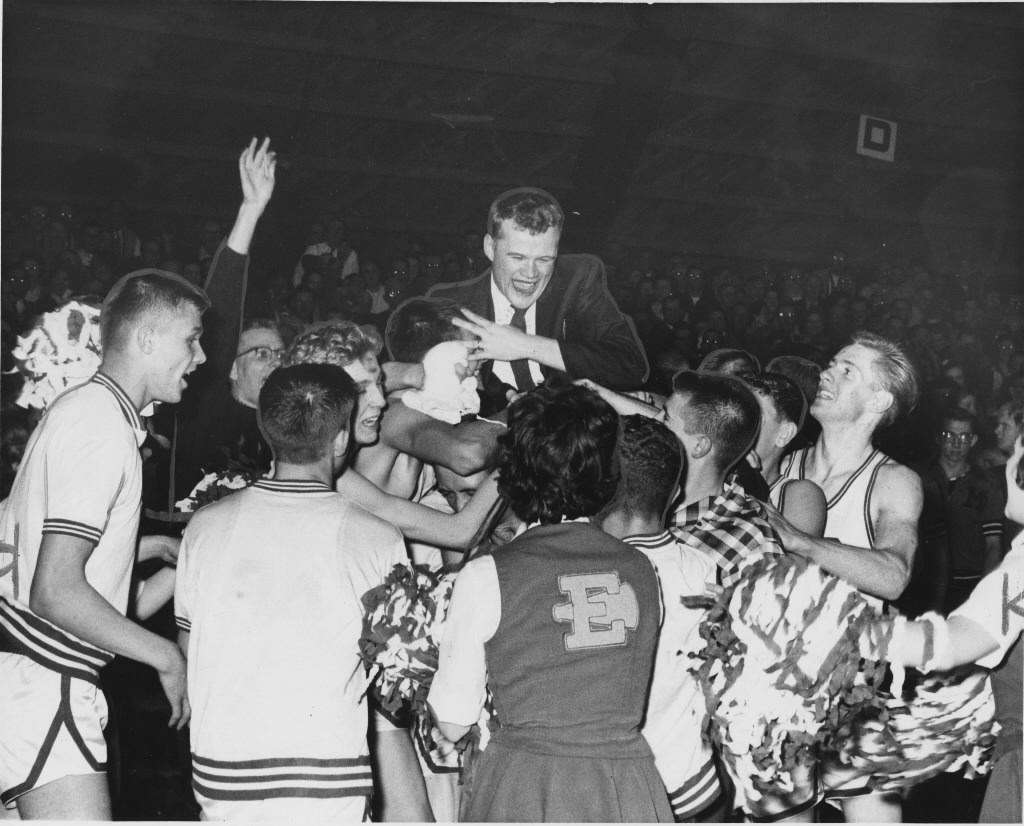 The Luverne boys reached the finals of Section 2A this month. The sport was hockey.
This was more evidence that the Minnesota sports map has undergone dramatic change since the most publicized event contested inside the state’s borders was the high school basketball tournament.
The golden era for this event was from 1946 through 1970 — from the start of post-World War II consumerism and the search for entertainment, to the end of the one-class tournament.
There were no varsity athletics for girls. And, for much of this era, high school hockey was restricted to Duluth, the Iron Range, the extreme northwest tier and the Twin Cities.
There was no need for a qualifier when referring to the boys’ basketball tournament. It was called the State Tournament. Period.
As a resident of Murray County, you might as well have been living in downstate Indiana. Basketball was king in Minnesota’s southwest corner, and particularly in the final decade of the one-class system.
Edgerton was the champion in 1960, followed by Marshall in 1963, Luverne in 1964 and Sherburn in 1970.
The Edgerton championship stands alone as the monumental happening in the 100 years of the state tournament. The Flying Dutchmen came from a village of under 1,000 people, a conservative place with four Dutch Reformed churches and two high schools.
“Most of the kids from the Christian Reformed and Bethel Reformed churches went to parochial school [Southwest Christian] in town,’’ Darrell Kreun said. “Those of us from the First Reformed and the Protestant Reformed went to the public school.’’
Dean Verdoes and Bob Wiarda were in the public school’s class of 1960. Kreun, Dean Veenhof and LeRoy Graphenteen were a year younger. In 1959, as five underclassmen, the Dutchmen had lost to Jasper and star Butch Raymond in the District 8 finals.
A year later, Edgerton came through Region 2 and arrived at Williams Arena as “tournament darlings.’’ The fervor for such a team was greater than ever in 1960, as the State Tournament regulars inside Williams Arena had tired of seeing “city kids’’ accept the trophy.
The past eight champions had been six teams from the Twin Cities area, plus Austin and Brainerd. A small school had not won since Gilbert, from the Iron Range, in 1951.
The Dutchmen drew three huge crowds for night sessions: 18,436 on Thursday in a 65-54 victory over Chisholm; 18,812 on Friday in a 63-60, overtime foul fest vs. Richfield; and a tournament-record 19,018 on Saturday in a 72-61 victory over Austin.
By Saturday night, the customers were so frenzied for Edgerton that they booed the Austin introductions. Also by Saturday night, the Dutchmen were so comfortable inside the big Barn that they made shots as if back in their tiny home gym.
Years later, Graphenteen would say: “I saw the movie 'Hoosiers’ and said, 'That’s our story.’ They could’ve came to Edgerton and made that movie.”
In 1963, Marshall came out of Region 3 and the junior guards, Terry (Turk) Porter and Loren (Whitey) Johnson, survived a shootout with Cloquet seniors Mike Forrest and Dave Meisner for a 75-74 victory.
In 1964, Luverne came from Region 2 with a tall athletic group and beat an excellent Rochester team 72-66 in the final.
And in 1970, Sherburn (pop. 1,300) came to Minneapolis as another small-town team representing Region 2.
“We had no idea that was going to be the last year with one tournament,’’ said Jeff McCarron, a Sherburn standout. “They didn’t announce it until after the tournament.
“I dreamed of playing in the tournament from the time I was a small kid. The goal was to get there; I wasn’t really thinking about winning.
“Even after winning a couple of games, I thought we were big underdogs against South St. Paul in the title game. We were in the layup line, and I said to Paul Krohn, one of two sophomore starters, 'What do you think?’
“He said, 'I don’t even think it’s going to be close,’ and he had this goofy smile. I thought, 'He means not close … in our favor.’ ”
The sophomore with the goofy smile was correct:

Sherburn 78, South St. Paul 62, on a night no one in the Barn realized was the moment this Minnesota institution would start the transition from the State Tournament to the state boys’ basketball tournament.

At  6-4, he offered rare size for that era in a point guard, running the show for the unbeaten Trojans. Kunze could shoot and handle the ball, and later he was a Gophers starter with Lou Hudson and Archie Clark.
He played wing for the Teddies and was labeled then as the best jump shooter ever to appear in the tournament. Nordland played at Stanford and still teaches shooting (swish22.com).
The future NFL linebacker became a tourney legend with his inside-outside scoring. In ’62, he had 36 points in a 66-62 loss to favored St. Louis Park, the eventual champion.
Zender moved into the lineup as a sophomore and starred for the Hornets — the only team to win three titles in a row in the one-class tournament. He was a scoring threat and tremendous inside defender.

He was generally surrounded by three defenders, yet Johnson was close to unstoppable around the lane. He scored 203 in six tournament games, including a one-class, single-game record of 48 in the 1956 third-place game.

1. Edina, 1967 (27-0)
The middle champ in the Hornets’ three-year run of titles. Three tourney victories by an average of 20 points, with four all-staters: Kurt Shellhas, Jay Kiedrowski, Jeff Wright and Bob Zender.
2. Hopkins, 1952 (25-1)
The ’53 Royals were champs and unbeaten, but the ’52 team had big Bob Wagner, twins Dave and Dan Tschimperle and Jerry Porter. Dave Tschimperle, one of the era’s greats, was three-time all-tourney.
3.  Minneapolis Roosevelt, 1957 (27-0)
The Teddies beat Blue Earth 101-54 to win the ’56 title, then repeated with an unbeaten ’57. Tom Nordland was the outside shooter, Jerry Butler the dominant center. Point guard Greg Larson became a Pro Bowl center for the New York Giants.
4. Duluth Central, 1961 (27-0)
Jim Hastings’ Trojans survived a 51-50 title game scare from Bemidji, led by all-everything guard Terry Kunze and sophomore center Chet Anderson.
5. Edgerton, 1960 (27-0)
The tourney’s major Cinderella story also should be remembered as a collection of marvelous shooters. Guard Darrell Kreun was an all-time marksman.

1. In 1963, guards Terry Porter and Whitey Johnson from Marshall and Mike Forrest and Dave Meisner from Cloquet put on a shooting exhibition in an all-time great title game. They combined for 36 field goals in Marshall’s 76-75 upset victory.
2. Minneapolis Roosevelt cleared its bench near the end of a victory over Mound in the 1961 Region 5 final. A Mound player recognized Warren Scamp from a DeMolay (Masonic youth) team. Turns out Scamp and a teammate had played in an out-of-season tournament. That got Roosevelt tossed from the state tournament. Royalton and Mound, both Section 5 losers to the Teddies, flipped a coin. Royalton won to gain its lone state tourney berth.
3. The Panthers from tiny Lynd, pop. 218, gave the 1946 tournament a full dose of Cinderella. Newspaper tales told of them practicing in haylofts and chasing jackrabbits to build speed for their fast-break offense. Lynd made it to the finals before being overwhelmed 63-31 by tall, efficient Austin.
4. A then-record crowd of 18,894 jammed Williams Arena to watch Gilbert and Canby — from opposite state corners — play for the 1951 title. Canby surrounded Boots Simonovich, Gilbert’s 6-10 center, with a zone, so Tom Richardson tossed in 26 points to lead Gilbert to a 69-52 victory.
5. In a meeting of northern powers, Brainerd held off Bemidji 49-47 for the 1954 title. Rodney Skoog (kid brother to Gophers/Lakers standout Whitey) had 19. Seven championship-round games were decided by a total of 18 points.