It was a back and forth game throughout but the Skippers ended up prevailing over the Royals. 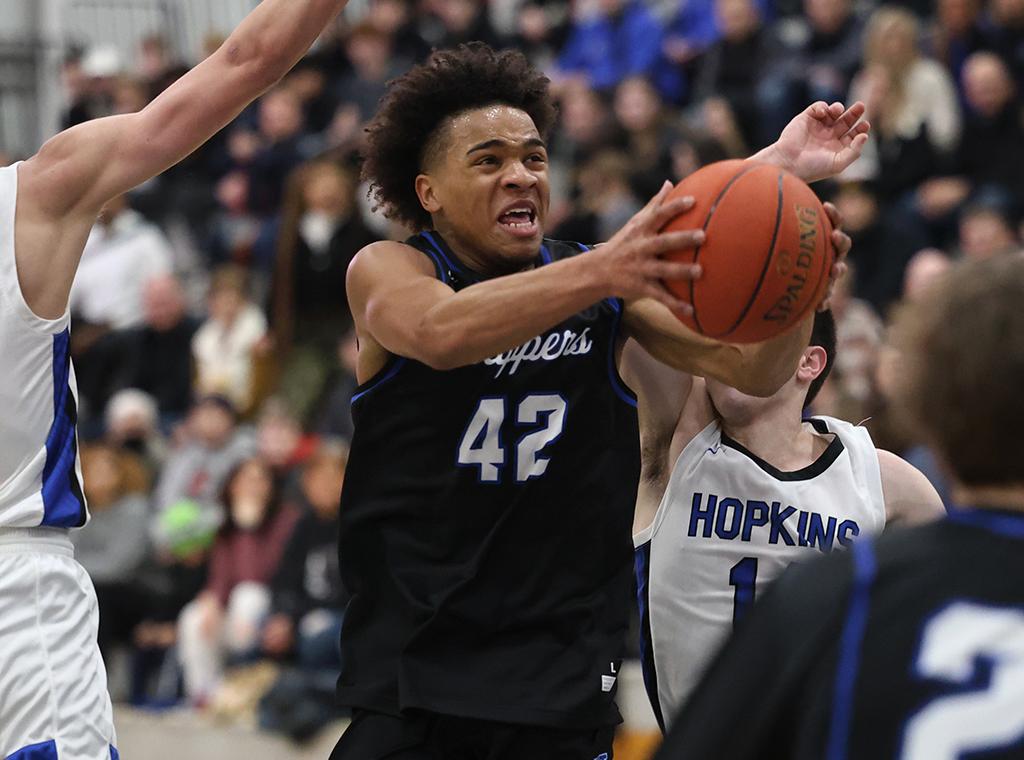 Ibrahim El-amin (42) led all scoring with 27 points leading Minnetonka to an 83-73 win over Lake Conference rival Hopkins on Friday night. Photo by Cheryl A. Myers, SportsEngine

With its top two scorers out, Minnetonka needed a player to step up to fill that void if the Skippers were going to defeat Lake Conference rival Hopkins on Friday.

Thankfully for the Skippers, a number of players did, including senior Ibrahim El-Amin. Going up against his former school, the senior poured in 20 second-half points to help Minnetonka pick up a key 83-73 win against the Royals.

“We knew it was coming,” Skipper coach Bryce Tesdahl said. “It’s not easy for anyone to have a death in the family.”

Without the Cain brothers, Minnetonka’s challenge of defeating perennial power Hopkins grew exponentially. However, things looked promising early with the Skippers, ranked No. 5 in Class 4A by Minnesota Basketball News, sticking with the No. 8-4A Royals. 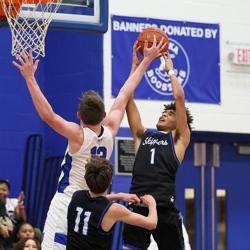 “We needed guys to step up,” El-Amin said. “We had to find a way to step up and make plays.”

The leading scorer for Minnetonka in the opening half was Andrew Stefonowicz. The junior point guard led the offense with 12 points in the first half and 23 in the game. He was also a factor on the boards with 10 rebounds and also picked up a pair of blocks.

“He’s a leader,” Tesdahl said. “He’s one of the best players in the state on both ends of the floor. He’s not afraid of the moment and takes advantage of the moment.”

On paper, El-Amin looked to be the natural player to lead the way. He entered the game averaging more than 13 points per game. At the half, he had seven points. But besides having a chance to be the star on the offensive end, he had the chance to take down his former program.

“You don’t have to get him up for the Hopkins game,” Tesdahl said. “It’s a natural rivalry.”

El-Amin made that motivation count in the second half. He scored 20 second-half points in a variety of ways, including some three-pointers that sent the Skipper crowd into a frenzy.

“In the first half, I just let the game come to me,” El-Amin said. “I just knew in the second half I had to make plays.”

The trio of El-Amin, Stefonowicz and junior Greyson Uelmen led the way with 70 of the 83 Minnetonka points. Many of those points in the second half came on three-pointers that fired up the Skipper crowd and bench alike.

“Making threes like that changes the game,” Tesdahl said. “When you make multiple in a row, it gives you energy on the defensive end. It’s tough for teams to come back from that.”

The mood in the Minnetonka locker room looked to be quite happy with players high-fiving and young Skipper hoops players chanting each player’s name as he walked by. Picking up a win over a fellow top-10 team without its two top scorers was certainly reason to celebrate.

“You only get a few of these moments in your life,” Tesdahl said. “This is going to give us more confidence. It was just a fun night for Minnetonka basketball.” 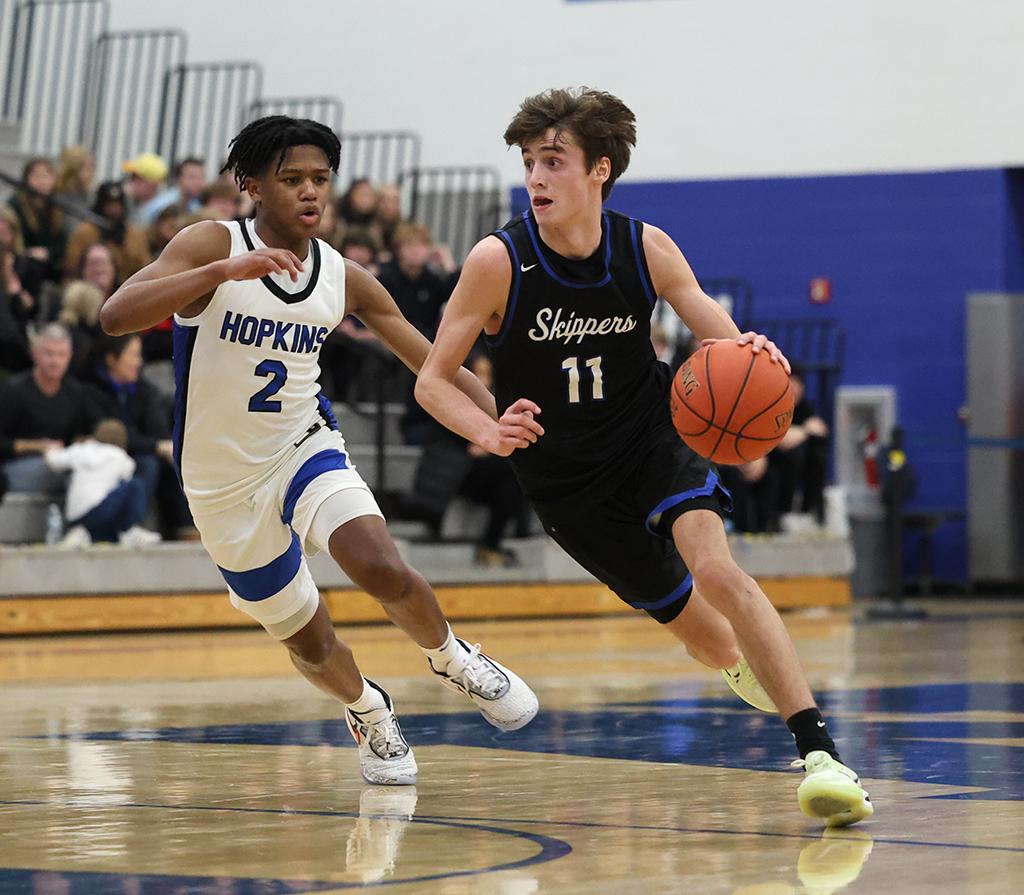 Playing without its top two scorers, Minnetonka banded together and found a way with key scoring in the second half as the Skippers pulled ahead and downed Lake Conference rival 83-73 on Friday at Minnetonka High School.

Jordan and Jalen Cain, brothers who are the leading scorers for the Skippers (9-2, 2-0), missed Friday’s game, leaving Minnetonka shorthanded as it hosted the rival Royals.

Hopkins (11-3, 1-2) came out and held some control early. Freshman guard Jayden Moore paced the Royals with 13 first-half points and finished with 23. Senior Vincent Hillsheim was a force in the paint with 22 points and nine rebounds.

Minnetonka, ranked No. 5 in Class 4A by Minnesota Basketball News, rallied late in the first half to make it just a 1-point deficit at the half. Junior point guard Andrew Stefonowicz led the way in the first half with 12 points. He finished the game with 23 points and 10 rebounds.

While Stefonowicz led in the first half, senior Ibrahim El-Amin led the team in the second half. He finished with a game-high 27 points as the Skippers put away the No. 8-4A Royals. Junior Greyson Uelmen also played a large role with 20 points to help Minnetonka to victory. 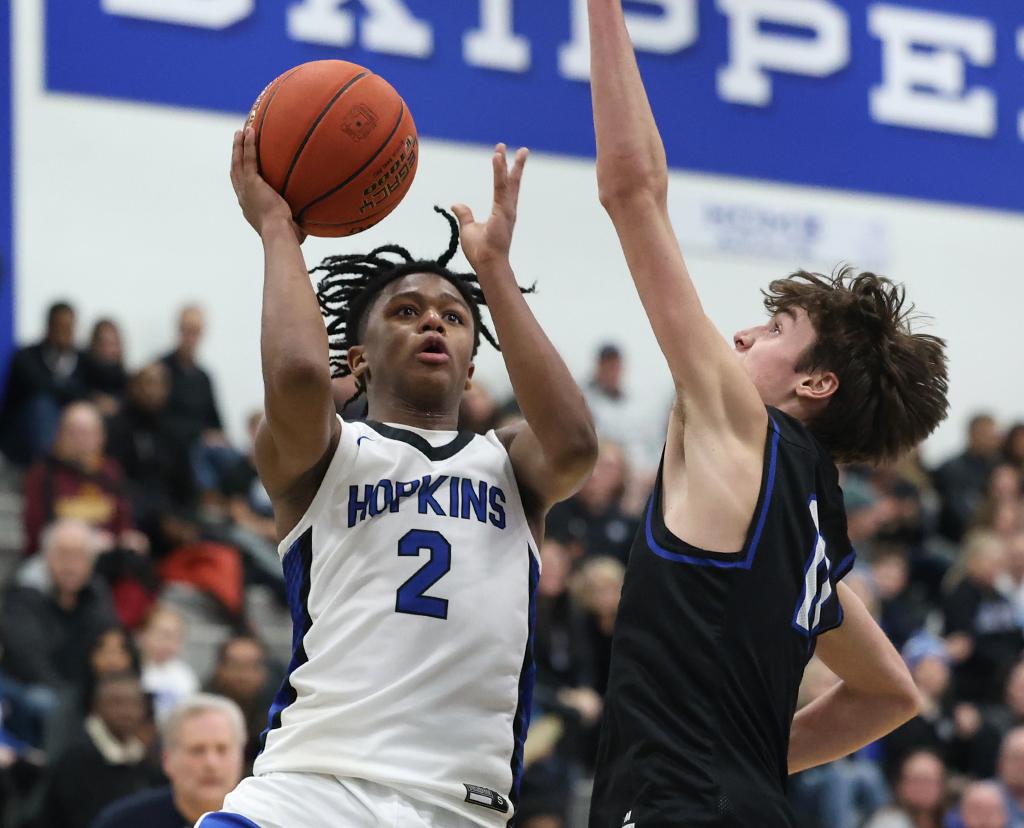 Freshman Jayden Moore (2) led Hopkins with 23 points, scoring 13 in the first half. Photo by Cheryl A. Myers, SportsEngine

MN Boys Basketball Hub polls are for entertainment purposes only.