There is an impressive display of athleticism occurring during the change of seasons in Osseo. 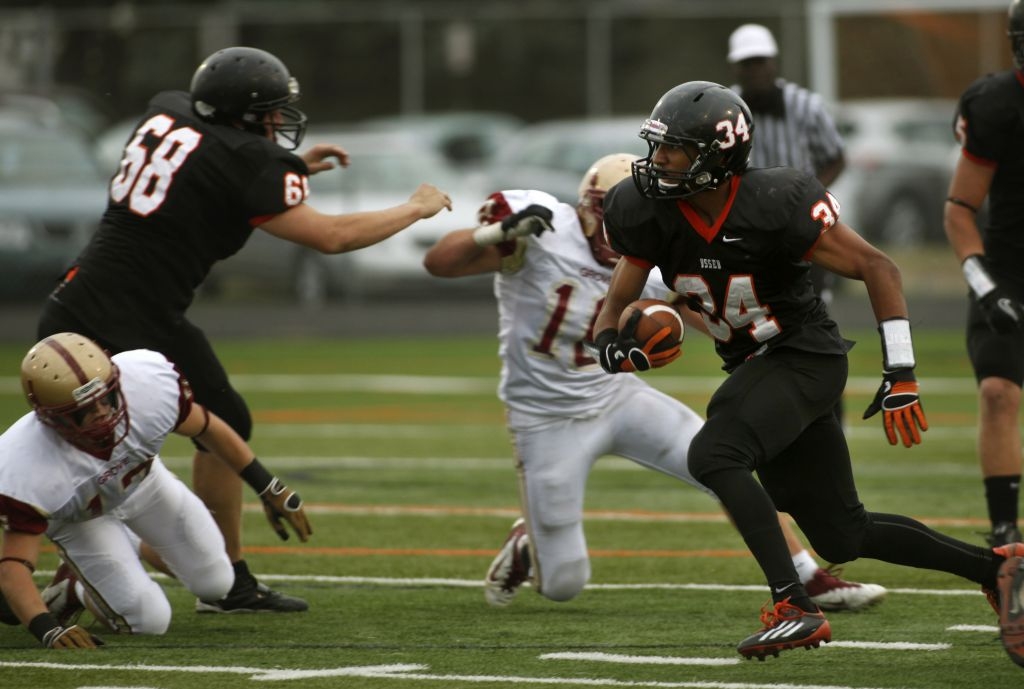 Runningback Bridgeport Tusler (34) of Osseo is one of three football players who play for the boys' basketball team. The others are D.J. Hebert and Will Johnson.

There is an impressive display of athleticism occurring during the change of seasons in Osseo.

After making a 9-2 run on the football field this fall, quarterback D.J. Hebert, running back Bridgeport Tusler and tight end Will Johnson have all dropped the pads and cleats in exchange for shorts and sneakers.

There's a difference between football and basketball conditioning. Head basketball coach Tim Thiesen said there is definitely an adjustment period.

"They did get winded pretty quick," Thiesen said. "But they're such phenomenal athletes that it didn't take them very long to get their basketball legs back underneath them."

Basketball requires more aerobic conditioning, with constant running up and down the court. Football uses quick bursts of energy for several seconds at a time.

While there is a bit of a transition period, Thiesen said he believes it's only a positive in the long run.

"It helps out so much," he said. "We encourage multiple-sport athletes at Osseo -- and we need that. To put kids in situations in other athletic environments only helps you in basketball."

Johnson wasn't with the team for Saturday's Tip-Off Classic, in which the Orioles defeated Prior Lake 70-67. He was making an official visit to West Virginia, who along with the Gophers are finalists for the tight end's services next season.

The Minnesota State High School League is asking the public for mementos and memorabilia to help be celebrate its 100th state basketball tournament by recognizing players, coaches, games and other great moments and teams in the state's history.

Many items have already been collected, including a championship trophy, photos, ticket stubs and more. They will be on hand at both the boys' and girls' tournaments and all items will be secured and returned to their proper owners.