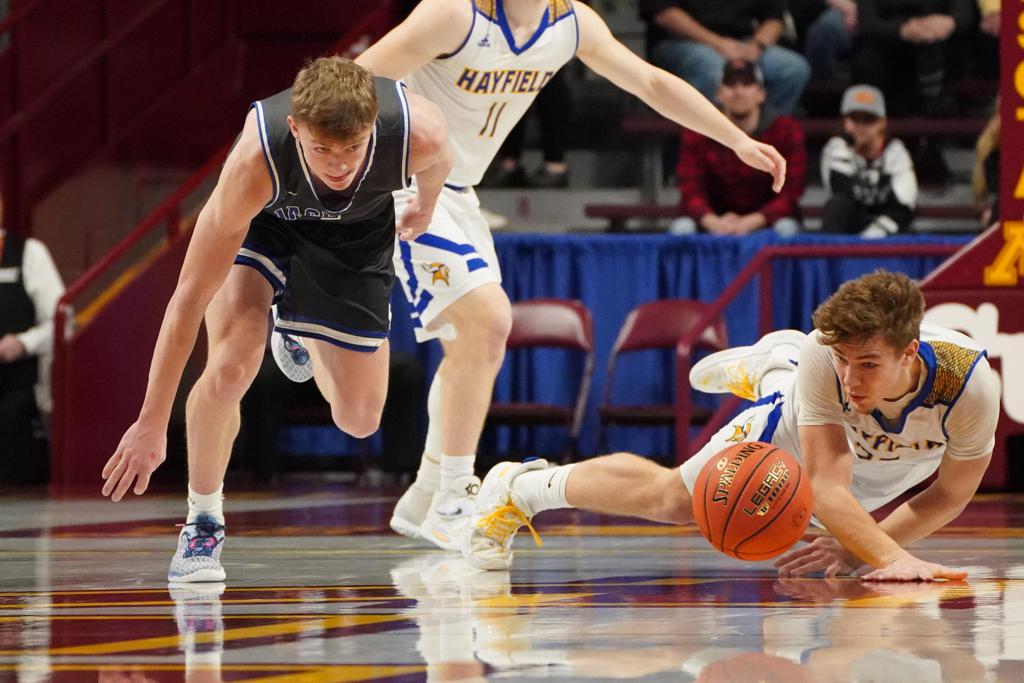 Belgrade-Brooten-Elrosa’s Kaden Pieper, left, and Hayfield’s Brody O'Malley, right, scramble for a loose ball during the first half of the Class 1A championship Saturday at Williams Arena. (Photo by Shari Gross, Star Tribune)

Defending state champion Hayfield came out of the locker room down eight points to start the second half, but that’s when junior guard Isaac Matti took over.

Matti scored the Vikings’ first 11 points of the second half on the way to a game-high 27 points and top-seeded Hayfield (32-2) sunk all six of its free-throws in crunch time to defend its state title with a 51-49 victory over second-seeded Belgrade-Brooten-Elrosa (28-5) in the Class 1A boys basketball state championship Saturday at Williams Arena.

“He’s been our guy all year,” Hayfield senior forward Easton Fritcher said. “When it came down to the end we wanted him to get his shots because he’s the best player on this team. He hits big shots when it matters and that’s what he did today.”

With Hayfield down 29-21 at the half, Matti sank three-consecutive three-pointers in the first three minutes of the second half to make it a one-point game.

“I knew it was probably time to start making some big shots and I did,” said Matti, who had 10 points in the first half. “It got us back in the game and we went from there.”

Hayfield, which was making its sixth state tournament appearance, won its second state title and became the first team to win consecutive Class 1A championships since Minneapolis North did so in 2016 and 2017.

“Whatever happened it was our last game,” Fritcher said. “Winning it is definitely better than losing it. It’s definitely a sigh of relief. It feels good to win it all again.”

In the closing moments Hayfield made its free-throws when it mattered most.

It was a three-point game with 32 seconds remaining and Belgrade-Brooten-Elrosa had the ball with a chance to tie it. However, Fritcher stole the ball, was fouled and hit both halves of a one-and-one to put Hayfield ahead 49-44 with 22.2 seconds remaining. After Belgrade-Brooten-Elrosa’s Kaden Pieper scored a putback with 8.2 seconds left to, again, make it a one-possession game, Hayfield senior guard Kobe Foster was fouled, stepped to the line, sunk two free throws and the celebration was on.

“I’m not the greatest free-throw shooter,” said Fritcher, who shot 46 percent from the free-throw line this year. “I know I can make them. It doesn’t always show on the stat line, but I knew I needed to step up. I just took a deep breath and I sunk them.”

For Belgrade-Brooten-Elrosa, brothers Ashton and Luke Dingmann combined for 35 of the Jaguars’ 49 points in the game. Ashton, a senior, had 20 points and six rebounds. Luke, a sophomore, had 15 points and five rebounds.