Class 1A quarterfinal: Jaguars close on a strong note 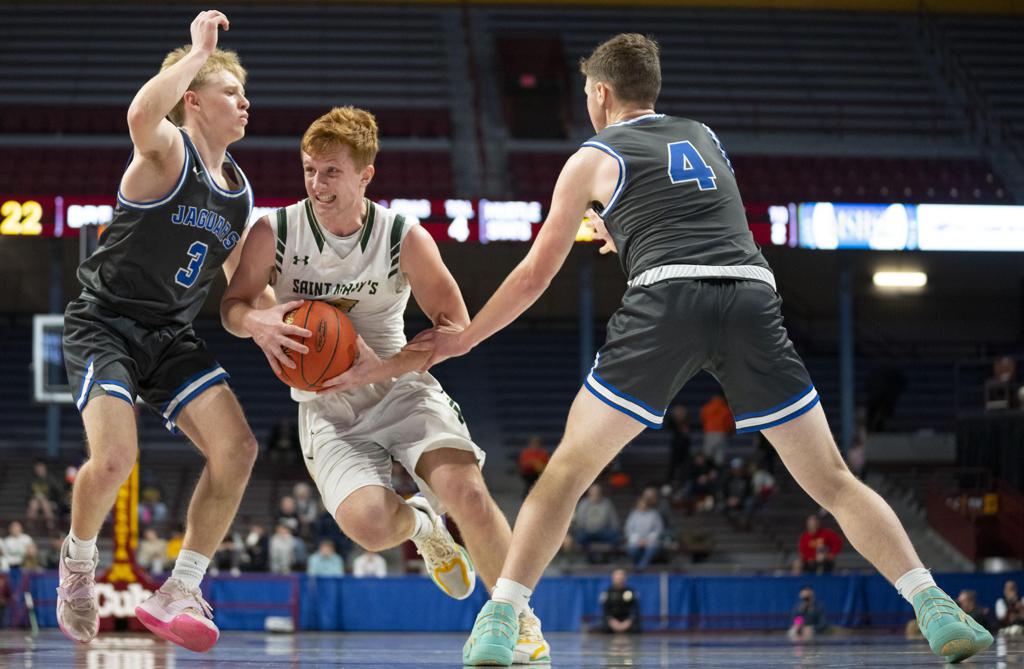 Sleepy Eye St. Mary’s guard Trenton Steffensmeier (22) drives between Belgrade-Brooten-Elrosa's Will VanBeck (3) and Tanner Shelton (4) during the first half of their Class 1A quarterfinal game Wednesday at Williams Arena. (Alex Kormann, Star Tribune)

Neither team ran away with the game. But No. 2-seed Belgrade-Brooten-Elrosa held a three-point lead at the half, moved the ball well and got some inside looks to spark a second-half run, said junior Kaden Pieper.

“I think we finally had some poise,” Jaguars senior Ashton Dingmann said. “There was definitely some nerves right away… but we found our rhythm toward the end of the second half in a crucial spot, and we started running through our offense and got some good looks.”

Those good looks were part of a 15-0 run the Jaguars used to pull away in the second half and end up with a 70-63 victory over Sleepy Eye St. Mary’s in the Class 1A state tournament quarterfinals Wednesday at Williams Arena.

Pieper scored 24 points to lead the Jaguars (27-4), going 2-for-2 from long range and 8-for-11 at the free-throw line. Dingmann added 15 points and a game-high nine rebounds.

The Knights gave Belgrade-Brooten-Elrosa everything they could handle and more, according to Jaguars coach Chris Anderson.

“But we responded,” Anderson said. “These guys really stepped up down the stretch, hit some shots.”

In Wednesday’s second half, the Knights (28-3) went about nine minutes without a field goal before connecting with a three-pointer with 1:07 left in regulation. The Knights shot 44 percent compared to 60 percent for the Jaguars.

“We just had to pick it up on the defensive end,” Knights junior Trenton Steffensmeier said. “They just kept hitting shots over us.”