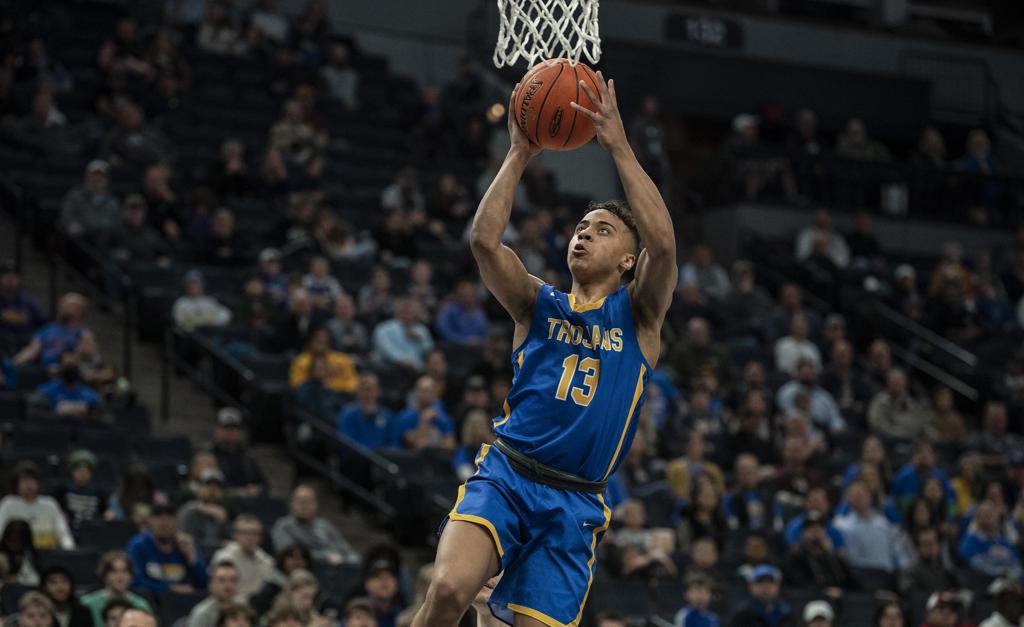 Myles Barnette of Wayzata scored on a fast break in the first half on Tuesday at Target Center. (Jerry Holt, Star Tribune)

One year away winning the state title, Wayzata (26-4) looked like a team prepared to make a strong run at a repeat, running out to a 26-point halftime lead and cruising to a victory over the Spuds (17-13) in the final large-school quarterfinal of the day.

Junior Myles Barnette scored 13 points and Spencer Hall 11 for Wayzata, which raced out to a 13-1 lead and extended that to 26 points, 37-11, at halftime.

It was the Trojans 15th consecutive victory and their 21st in their past 22 games.

“We’ve been rolling these last couple of games and putting a lot of pieces together,” said senior guard Drew Berkland, the sparkplug for Wayzata’s 2021 championship team. “We wanted to do it on a little bigger stage and take the next step toward a state championship.”

Trojans 6-9 senior center Carter Bjerke had nine points and 11 rebounds and said he feels they’re peaking at the right time.

“Fifteen straight, that’s nothing little,” Bjerke said. “That’s a lot of hard work. We’re so confident right now, coming off a couple of big wins in a row. With all this confidence, we’re just going to keep on going.”

Berkland said he sees plenty of similarities between the Trojans’ 2021 champs and this season’s group.

“There’s a lot of similarities just in the face of how we’re playing at this time of year,” Berkland said. “We’re playing really good team basketball. The ball is hopping all over the court, which is similar to last year.”

“The way they seamlessly switch and rotate,” Ellingson said. “They disrupt timing ... They’re so connected on the defensive side of the floor, it just made it difficult for us.”