Tre Holloman of Cretin-Derham Hall, a leader in every sense of the word, is the Star Tribune Metro Player of the Year

The senior guard, and Michigan State commit, fills up the stat sheet while fueling teammates’ success. 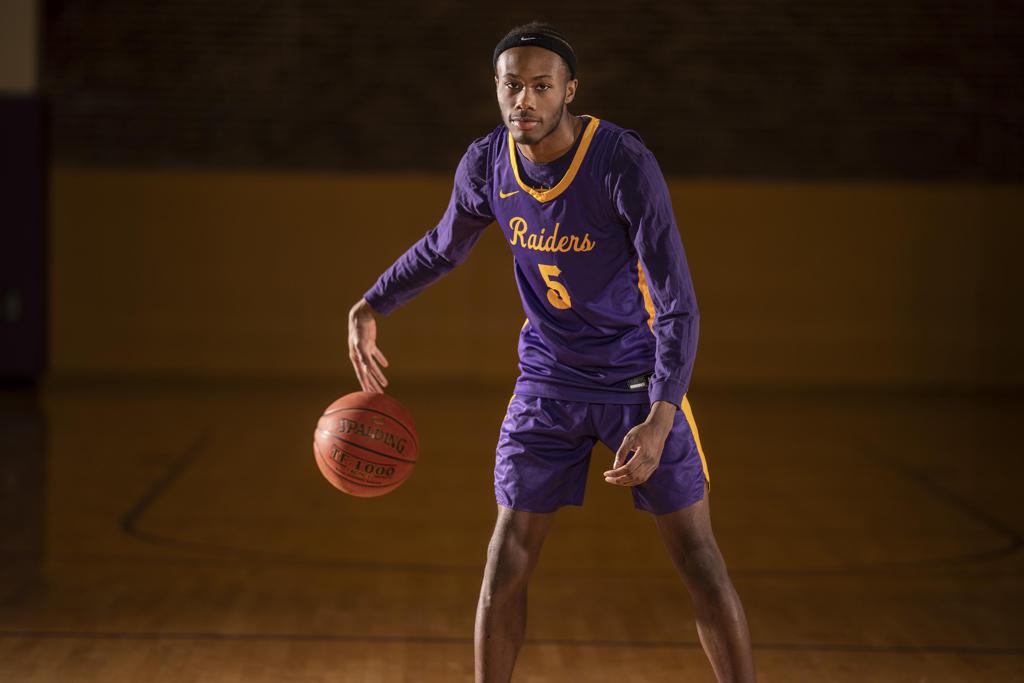 “I’m the point guard and I’ve been a winner. They trust me,” Tre Holloman said of his relationship with his teammates.

Cretin-Derham Hall assistant coach Tony Yazbeck saw something he’d never seen before when an early-season practice came to a halt. And Yazbeck, long a fixture with the Howard Pulley club, has seen plenty.

The Raiders’ remarkable point guard, Tre Holloman, had taken it upon himself to pause the practice to ensure his teammates were in the right places.

“He stopped practice and started moving guys around, telling them they should be here or he wants them there,” Yazbeck recalled. “He just knew where they needed to be. I haven’t seen a player do that before.”

“I’m the point guard and I’ve been a winner,” Holloman said. “They trust me.”

It’s precisely for such heady play that Holloman is the 2022 Star Tribune Metro Player of the Year in boys’ basketball.

What sets him apart is that the 6-1 Holloman is a point guard in the truest sense. His feel for the role is innate, his understanding instinctive. He’s a natural, believing his most important task is making the team better. With Holloman, personal satisfaction is found in setting up his teammates and making them better. Individual glory is intricately tied to team success.

“I don’t know where it comes from actually,” said Holloman. “I think it just comes from watching point guards and my mom being a coach. It just comes naturally. I just want to help the team win.”

He views the game a little differently than most, seeing plays and possibilities others do not. He plays point guard chess, thinking two, three moves ahead.

“He sees things other players don’t see and he sees them before they happen,” said Cretin-Derham Hall head coach Jerry Kline. “He’s like a coach on the floor.”

Kline relayed a story about the rarity of Holloman’s gifts. After his freshman year, Holloman was participating in a basketball combine/camp in a western state designed to showcase talent for college coaches.

That was the beginning of a relationship that ended up with Holloman committing to Michigan State and signing with the Spartans in November.

He’s not just a passer, either. Holloman knows when it’s time to use his fast-twitch first step and his slippery moves to create open shots for himself. Whatever is needed at a particular moment, Kline is comfortable that Holloman will find a way to make it happen.

After playing for Minneapolis North as a middle schooler in eighth grade, Holloman enrolled at Cretin-Derham Hall before his freshman year because his parents were adamant he receive a private school education.

In his four years there, Holloman has amassed 2,072 points, 1,103 assists, 669 rebounds and 422 steals, becoming just the third player in state history to accumulate such lofty numbers. He surpassed former Gopher Daniel Oturu to become the schools’ all-time leading scorer earlier this month.

Exceptional numbers, sure. But what Holloman is most proud of is producing wins.

Last April, with Holloman running the show, the Raiders made it to the Class 4A championship game before falling to Wayzata.

He’s got them back to the state tournament this year, helping them overcome an up-and-down season in which they were incorporating a few newcomers into key roles. He hit the game-winning 18-footer with 2.5 seconds left to lift the Raiders to a 52-51 victory over East Ridge in the Section 4 final.

Cretin-Derham Hall is playing its best basketball of the year, having won seven games in a row, and Holloman is right where he wants be.

“I feel like I have some unfinished business,” he said.