The Pirates secured a spot in the state tournament with a 20-point victory over the Orioles. 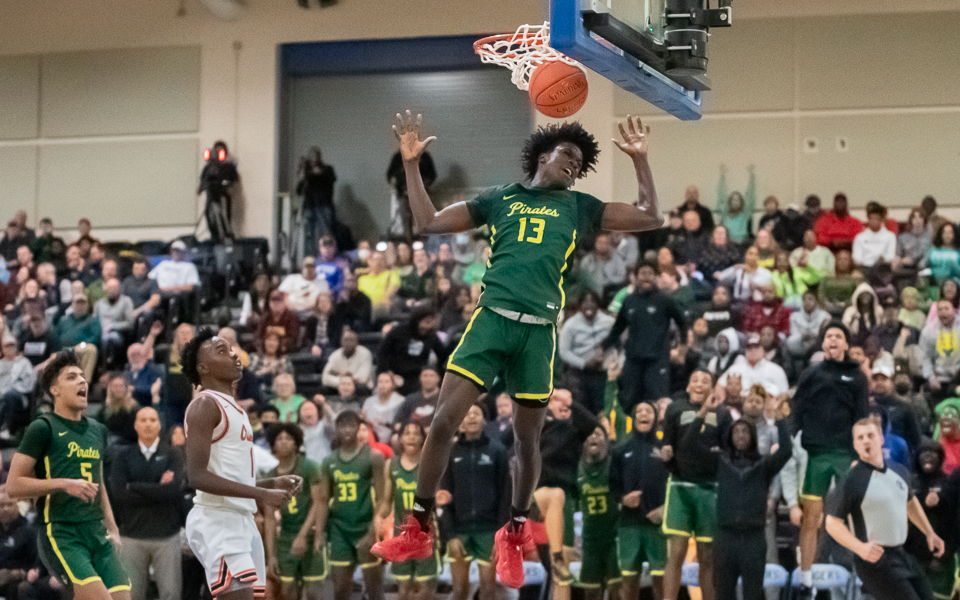 Leo Torbor (13) of Park Center had a game high 23 points Thursday night as the Pirate’s defeat the Oriole’s 89-69 in the Class 4A, Section 5 Championship. Photo by Earl J. Ebensteiner, SportsEngine 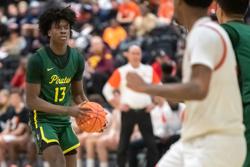 A year ago, Park Center coach James Ware and his team sulked at Champlin Park High School as they watched the Rebels celebrate the Class 4A, Section 5 championship and fought back tears in a close, emotional loss.

On Thursday, things looked a little different. Players high-fived and hugged while Ware walked around with a freshly-cut net draped around his neck.

Using the 2021 loss as motivation, Park Center’s revenge tour continued on Thursday as the Pirates rolled past Osseo 89-69 to win the section crown at Rogers High School.

In 2021, the Pirates traveled to Champlin Park for the section final. Park Center took the top-seeded Rebels to overtime before Champlin Park prevailed. With many of this year’s Pirate players on the bench and floor for that loss, there certainly was motivation there.

“Our goal the entire time was to get back to this game,” Park Center senior guard Braeden Carrington said. “It was all hard work.”

Using that motivation, the Pirates (28-1) have rolled past opponent after opponent, dropping only one game all season — a 64-61 loss to Totino-Grace on Jan. 21.

“Ever since that loss last year, we didn’t want that same feeling to happen again,” Park Center senior guard Leo Torbor said. “All of us came together and said we were not going to let this happen again.”

After taking down Mounds View in the section semifinal, Park Center found itself meeting a familiar opponent in the section final in Osseo. The two teams met twice during the regular season with the Pirates winning both games.

Though the Orioles (22-7) came in as an underdog, they pushed their rivals early as the teams traded leads. Then, things changed. Park Center went on a 12-2 run to go up by 14 points.

“We knew we just had to keep pushing the pace,” Carrington said. “They can’t keep up with our pressure and were suffocated.”

The lead eventually grew to 24 by halftime as the pressure continued to mount on Osseo and give the Pirates more offense. Ware said he’s never had a team be able to pressure its opponent like this one.

“We’ve had a lot of good defensive teams,” Ware said.  “But these guys are special in the way that they’re willing to guard the other team.”

Though those two had the highest stat lines, plenty of their teammates got involved. Ten different Pirates contributed baskets.

“It’s a very unselfish group,” Ware said. “We have such great leaders. The city of Brooklyn Park should be very proud of them. I’m excited for the rest of the state of Minnesota to see them.”

Park Center continued to keep Osseo an arm’s length away before the final buzzer sounded and the raucous celebration commenced.

The Pirates return to the Class 4A state tournament for the first time since 2019. The 2020 Park Center team had its season shutdown prior to the section final due to COVID-19 and then there was last season’s section final loss.

Because of that, Carrington is the only player with state tournament experience. For players such as Torbor, these are firsts, including cutting down the net on Thursday. But despite any inexperience, the goal is well-known.

“Coach always said going to state is going to be an unreal experience,” Torbor said. “The job is not done. Hopefully, on March 26, we can hold that trophy.” 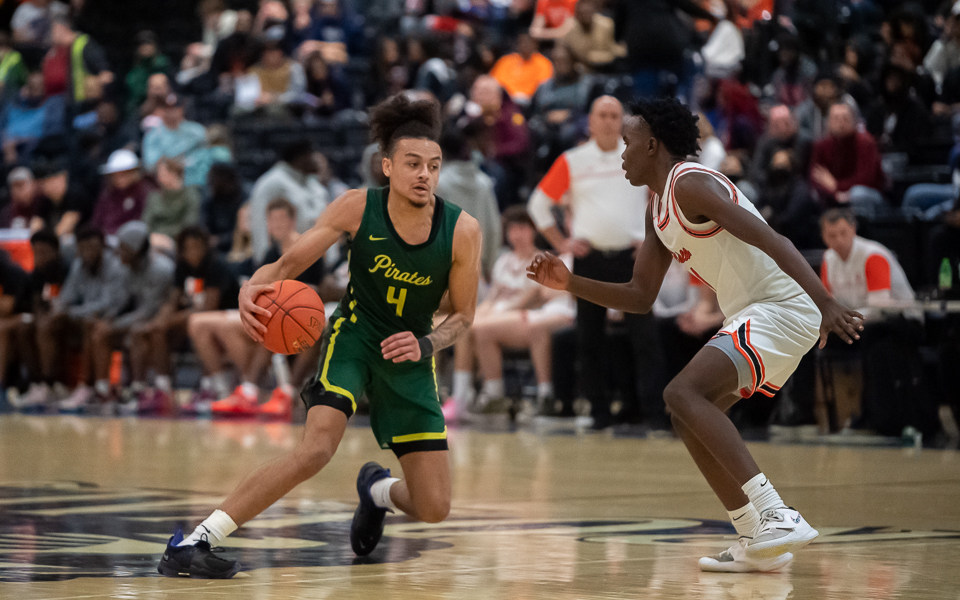 The Pirate’s Braeden Carrington tallied 18 points in the Class 4A, Section 5 Championship game at Rogers High School as Park Center gets the win over Osseo 89-69. Photo by Earl J. Ebensteiner SportsEngine

Park Center defeated rival Osseo 89-69 in the Class 4A, Section 5 final as the Pirates are headed to next week’s state tournament.

Park Center (28-1) exploded late in the first half and got the lead up to 24 at the halftime break. Pirate senior guards Braden Carrington and Leo Torbor were the catalysts. Carrington, a University of Minnesota recruit, poured in a team-high 13 points in the half while Torbor, a San Jose State commit, had 10 points.

Osseo (22-7) tried to keep pace with a senior guard of its own in Tyirece Waits. He poured in eight points in the first half to lead the Orioles.

With the major cushion, the Pirates still kept the foot on the gas and hardly let the lead get below 20 until late in the game. Carrington finished with 17 and Torbor had 23. Senior forward-guard Cody Pennebaker finished with 15 points.

Osseo struggled to make any ground despite the effort from Waits and senior center Blessed Barhayiga. The Orioles did push the deficit down late with a full-court press. Waits finished with 20 while Barhayiga finished with 19. 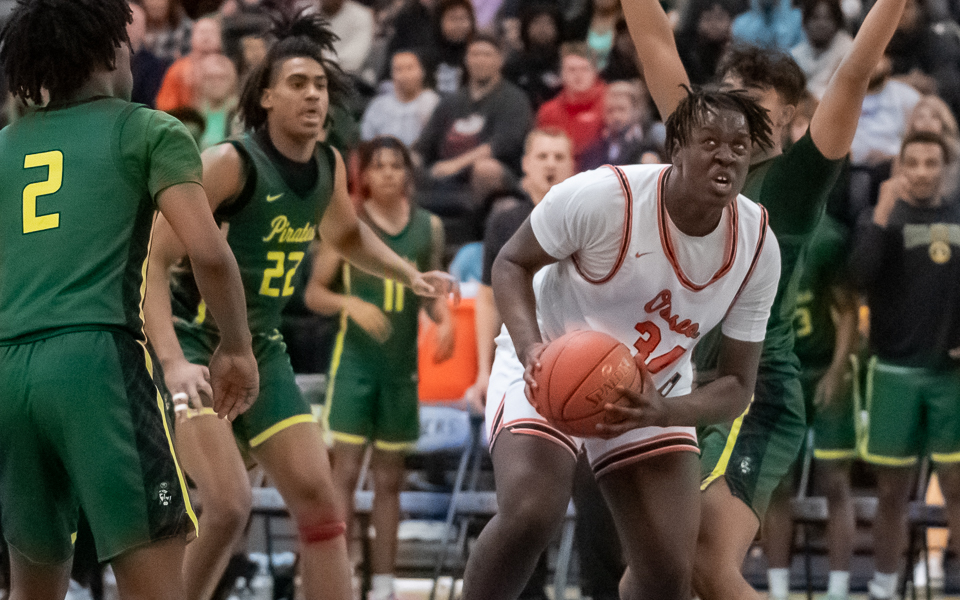 Blessed Barhayiga of Osseo looks to the basket Thursday night. Barhayiga tallied 19 points in the Oriole’s 89-69 loss to the Pirate’s. Photo by Earl J. Ebensteiner, SportsEngine