The Polars storm back in the second half to defeat the Lakers. 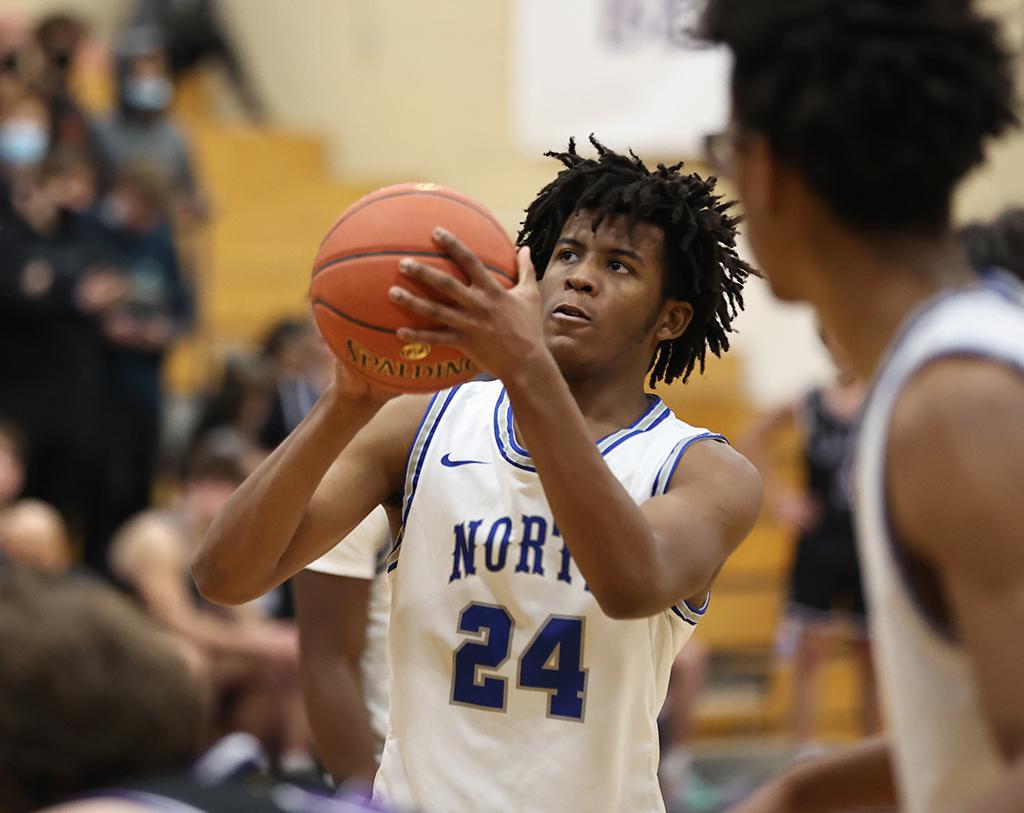 Willie Wilson (24) gives Minneapolis North a 58-55 lead from the free throw line with just over a minute remaining in the game. The Polars held on to the lead and defeated conference rival Minneapolis Southwest. Photo by Cheryl A. Myers, SportsEngine

It looked tough, and in the end, Minneapolis North found a way to the win, clinching a 58-55 win at Southwest High School.

“Obviously well coached and well prepared for us,” McKenzie said. 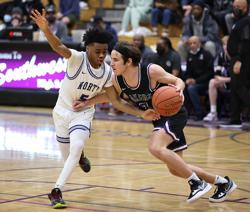 That looked to be the case in the early going, with the Lakers coming out strong and fast. Ball movement played a key part in the opening minutes. Every Southwest pass was followed by a cut to the basket, which allowed the home team to find open spots on the floor and take advantage.

Lakers (10-8) senior Hakeem Ford had the play of the game midway through the first half with a monster dunk that ignited the team and fans in attendance. That helped Southwest build a 38-29 lead going into halftime.

“He has great athleticism,” Minneapolis North senior Willie Wilson said of Ford. “Just overall a good player and I think he brings a lot to the Southwest team like seniority and just going the extra mile with fight.”

Ford scored 13 in the first half but was held to just two points in the second half.

“I switched the matchup,” Coach McKenzie said. “Zaeshon (Rich) is a real tough defender, so we used him and Willie on him a little bit.”

The second half adjustment was just one of many the No. 2-2A ranked Polars (12-4) made to find their way back into the game and retake the lead 52-51 with three minutes, 19 seconds to go.

“Being down, we just knew we had to fight,” Minneapolis North senior Rio Sanders said. “We were slacking on defense so all we really talked about (at halftime) was picking up on defense.”

The rise in intensity was clear the moment the second half started, with both teams struggling to find the bottom of the bucket.

The Lakers would have their final lead of the game at 55-54 with just two minutes to go before a technical foul and two consecutive turnovers helped North regain control.

Sanders, who finished with 12 points for the Polars, scored a huge layup that gave Minneapolis North a 58-55 cushion.

Southwest would have one final chance to tie it,  but Preston Engen’s shot from the top of the key missed left at the buzzer.

“We dug down deep tonight,” McKenzie said, adding he was pleased with how his team responded to a close game on the road.

“When you’re a veteran team, you expect that,” McKenzie said. “We got seven seniors on this team, so you expect when the going gets tough, the tough gets going, and that’s what we were able to do tonight.”

Minneapolis North’s Sanders had help from Wilson, who finished with a game-high 17 points.

“I know every game Willie is going to bring it,” Sanders said. “I know he’s going to have a good game. There’s never been a time where I’ve doubted him.

McKenzie echoed Sanders’ sentiment about Wilson, who leads the team in scoring, averaging 14.5 points per game.

“Willie is still one of the most underrated players in the state,” he said, adding Rio’s play recently has caught his attention.

“Rio has been turning it up,” McKenzie said. “He’s on a nice little seven or game streak of doing the things that we ask him to do.”

Rio, as Wilson says, is part of the "core-four" of the team, including Wilson, Jacob Butler and De’Meiko Anderson.

“Before every game we have a talk about the game, and we just had to tell Rio, ‘we need you to step up’ and that’s what he did,” Wilson said.

A hard fought win for a team that lost just one regular season game last season, the veteran players know all that goes into a season, and what it takes to have success.

“Being more comfortable with each other and trust,” Sanders said. “Making the extra pass, and that has a lot to do with trusting each other.” 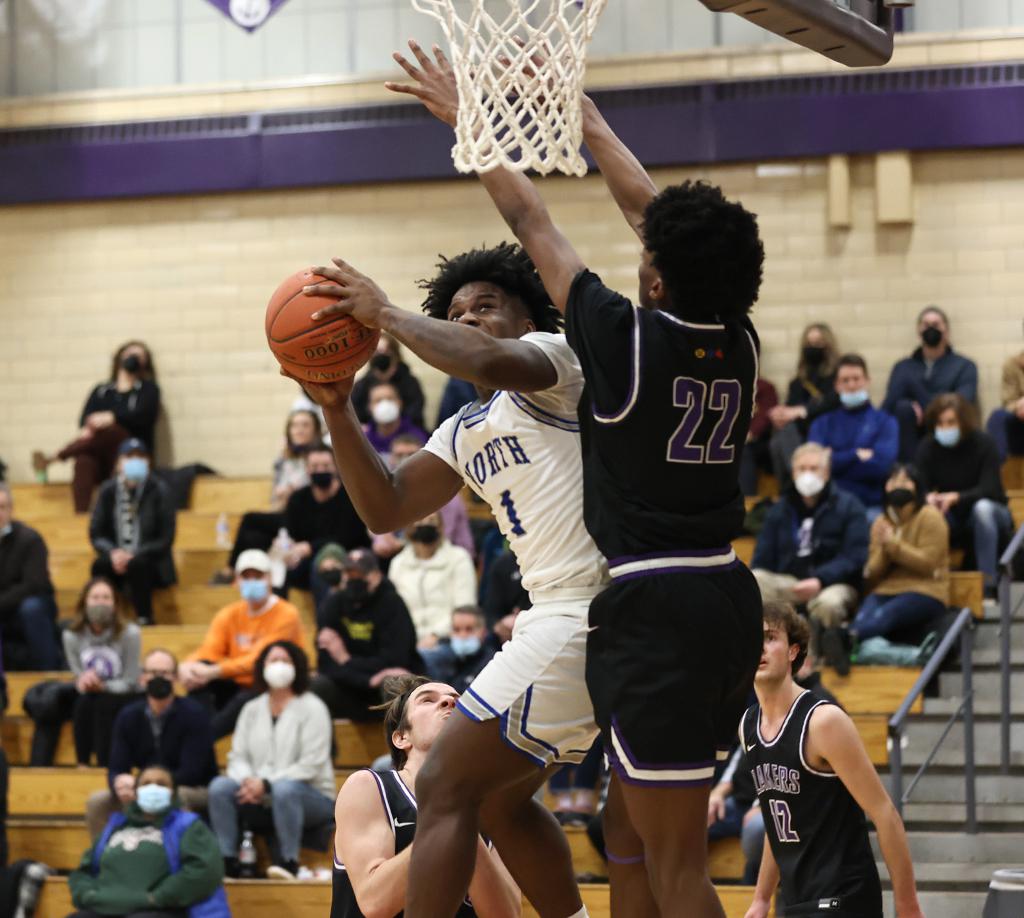 Mario Sanders (1) lays the ball up around the arms of Hakeem Ford (22). Sanders finished with 12 points and 4 rebounds on Tuesday night. Photo by Cheryl A. Myers, SportsEngine

The Lakers (10-8) weren’t fazed in the early going and utilized ball movement on the offensive end to build a nine-point lead in the first half. Senior Hakeem Ford’s poster dunk midway through the first half ignited the team and the fans. Ford scored 13 of his 15 points in the first half as the Lakers held a 38-29 lead.

The No. 2-ranked Polars (12-4) responded in the second half, cutting the deficit to three on multiple occasions, but they could never regain the lead. Both teams stepped up defensively, with buckets coming few and far between.

The Lakers would hold onto the lead for the last time at 55-54 with two minutes to go before a technical foul and two consecutive turnovers helped the Polars take the lead for good.

Following two missed free throws from Sanders, Southwest had one more shot, but senior Preston Engen’s 3-point shot from the top of the key missed just left, securing the win for North. 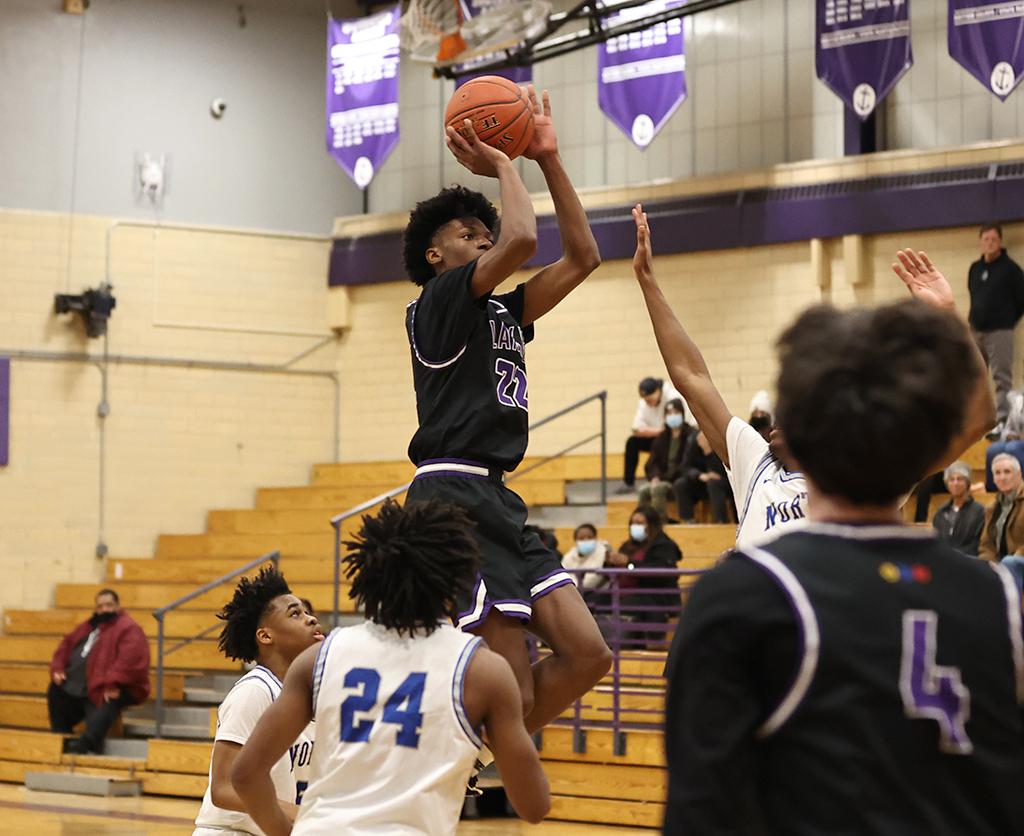 Minneapolis Southwest's Hakeem Ford (22) hits a three-point shot early in the first half. Ford led the Lakers' offense with 15 points and five rebounds, hitting 13 of those points in the first half. Photo by Cheryl A. Myers, SportsEngine