Chatman, Watson combine for 30 points and lead the Eagles to a win. 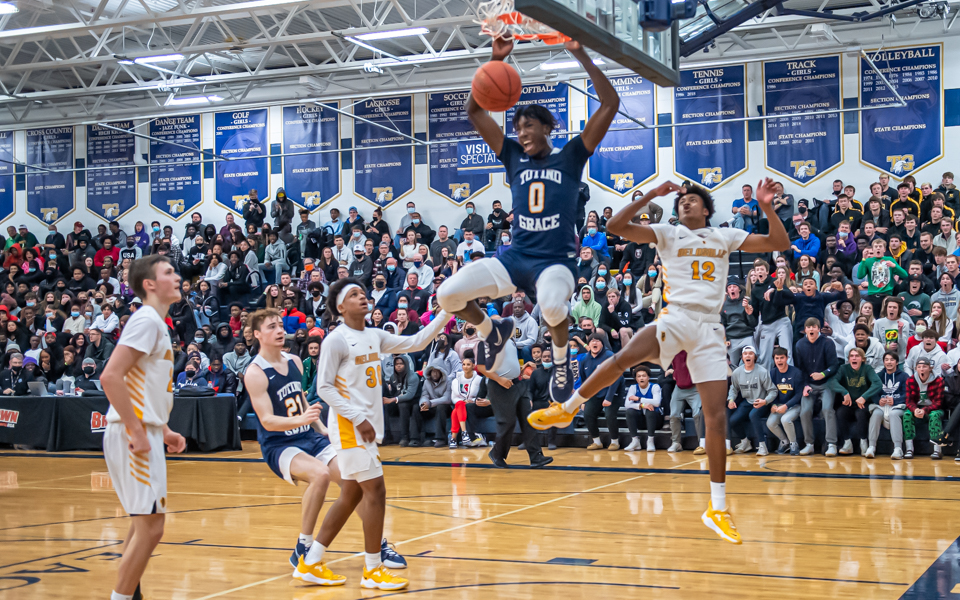 Junior Demarion Watson celebrates his slam dunk in the second half Saturday night in the Breakdown Sports Big 12 Classic. The Eagle’s beat the Islander’s at home 61-58. Photo by Earl J. Ebensteiner, SportsEngine 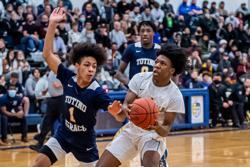 Totino-Grace senior and 6-foot-7 forward Demarion Watson grabbed a rebound and made a basket with under three minutes to play to extend his team’s lead to four points. That was big for the Eagles, who trailed most of the night against DeLaSalle.

As if to put an exclamation point on his evening, Watson quickly followed up with a monstrous dunk for a 59-53 lead with the clock showing 2:20. The packed gymnasium at Totino-Grace High School exploded with cheers. Watson let out an emotional yell of his own following one of the biggest plays of the game.

“It was a really emotional game throughout the game,” Watson said. “So, you had to let it all out at once. That was a fun play for me, especially because it was a game-changer for us.”

That dunk—and Watson—were both game-changers for Totino-Grace, ranked No. 1 in Class 3A by Minnesota Basketball News, which came back late for a 61-58 victory over No. 2 DeLaSalle in the finale of Saturday’s 2021 Big 12 Classic boys’ basketball tournament.

Eagles junior Tommy Humphries went right down for a layup and a 2-0 lead from the opening tip-off. That was the only lead Totino-Grace (3-1) held in the first half and for most of the game. Down 33-28 at halftime, Watson came out with a pair of shots from beyond the arc early to go up 34-33. That lead was also short-lived before the Eagles tied the game at 42 and again at 53.

“They were the better team for 99 percent of that game,” Totino-Grace coach Nicholas Carroll said. “I thought we had a couple guys make plays at the end to push it over the top for us.”

Zy’lerre Stewart scored a bucket to put the Eagles in front for good. Totino-Grace went ahead 59-53 after Watson’s shots completed a 13-2 run for the Eagles. Watson is a spirited, high-energy player whom his teammates rally around, according to his coach. He can also shoot from long range, dunk or block on the defensive end.

“I think as a collective unit, guys feed off of him,” Carroll said. “And other guys at times, but D’s definitely an energy giver.”

For the Islanders, sophomore guard Cash Chavis scored a game-high and season-high 21 points, including 15 in the second half. Senior Kyle Johnson added 14 points. DeLaSalle (3-3) has lost three of its last four games.

The Eagles finished the weekend on a winning note; Saturday’s contest was their third game in as many days and fourth of the week. They defeated Champlin Park 83-58 Thursday before playing Corona Centennial (Calif.) Friday at Sanford Pentagon in Sioux Falls, S.D., taking a 66-35 loss.

Carroll called that loss “an awesome learning opportunity” for his team.

“I think our kids have ambitions to be competitive locally but also nationally,” Carroll said. “And see what they can do against some of the best programs in the country.”

Watson agreed that the Eagles have faced some good tests so far and really understand what they need to work on in regard to their daily habits as a team, executing in practice.

For the Eagles, Watson finished with 14 points Saturday. But he wasn’t the only player with important contributions late to net a winning outcome.

Junior guard Taison Chatman, who finished with a team-high 18 points, hit a 3-pointer with 3:44 left on the clock to tie the game at 53 apiece. As the Islanders looked for one last shot to go ahead in the final 30 seconds, Chatman also went up and blocked a shot in the corner to keep the Eagles ahead by a basket. He then hit a free throw with 1.8 ticks remaining for the final point of the game.

“It was hard-fought; it was a dog fight,” Chatman said. “I think we just locked in more, and we paid attention to scouting.” 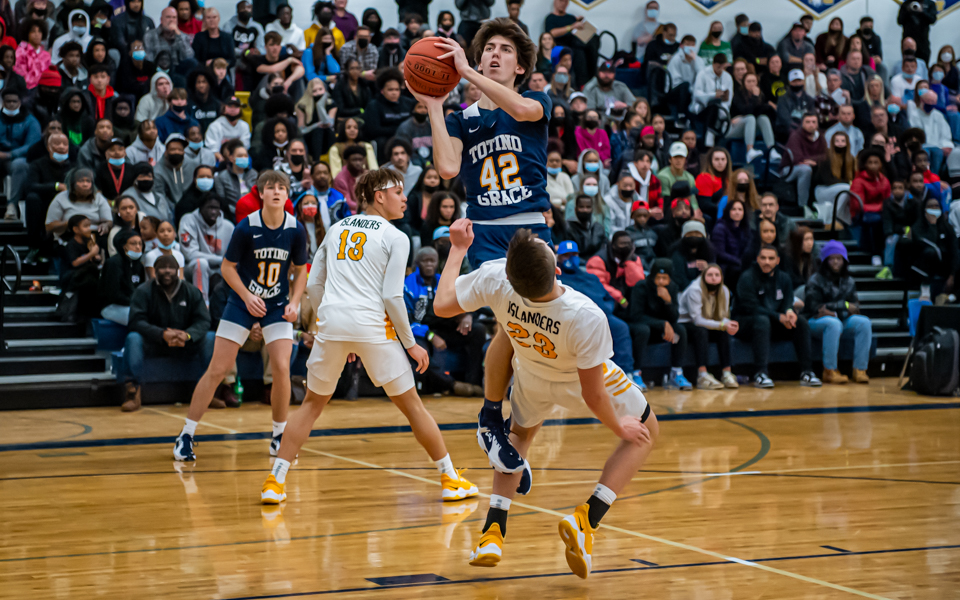 Driving to the basket in the first half of play Saturday night is Totino-Grace’s 42 RJ Spencer. Totino-Grace defeated DeLasalle 61-58 in the Breakdown Sports Big 12 Classic. Photo by Earl J. Ebensteiner, SportsEngine

No. 1 in Class 3A Totino-Grace trailed for most of the game until about two minutes left in regulation when senior Demarion Watson grabbed a rebound and scored. For the exclamation point, he dunked the basketball again for a six-point lead that his team didn’t give up.

The Eagles (3-1) found their way back for a 61- 58 victory over No. 2-ranked DeLaSalle Saturday at the 2021 Big 12 Classic boys’ basketball tournament at Totino-Grace High School. 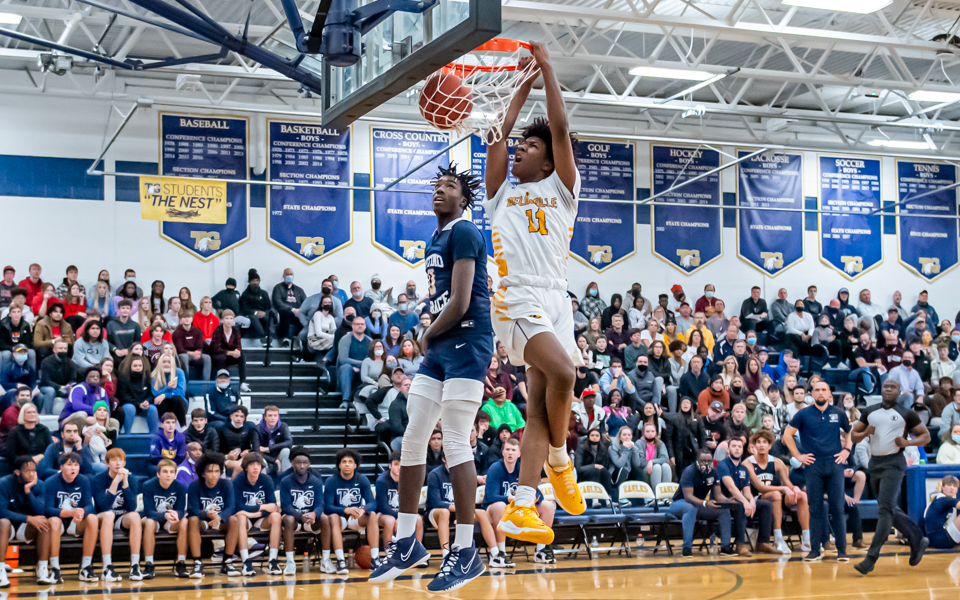 Casmir Chavis of DeLasalle picks up a slam dunk in the first half Saturday night in the Islander’s 61-58 loose to the Eagle’s. Photo by Earl J. Ebensteiner, SportsEngine