Thanks to numerous lead changes and a tight contest, the Sabers avenged last season's state semifinal loss to the Trojans. 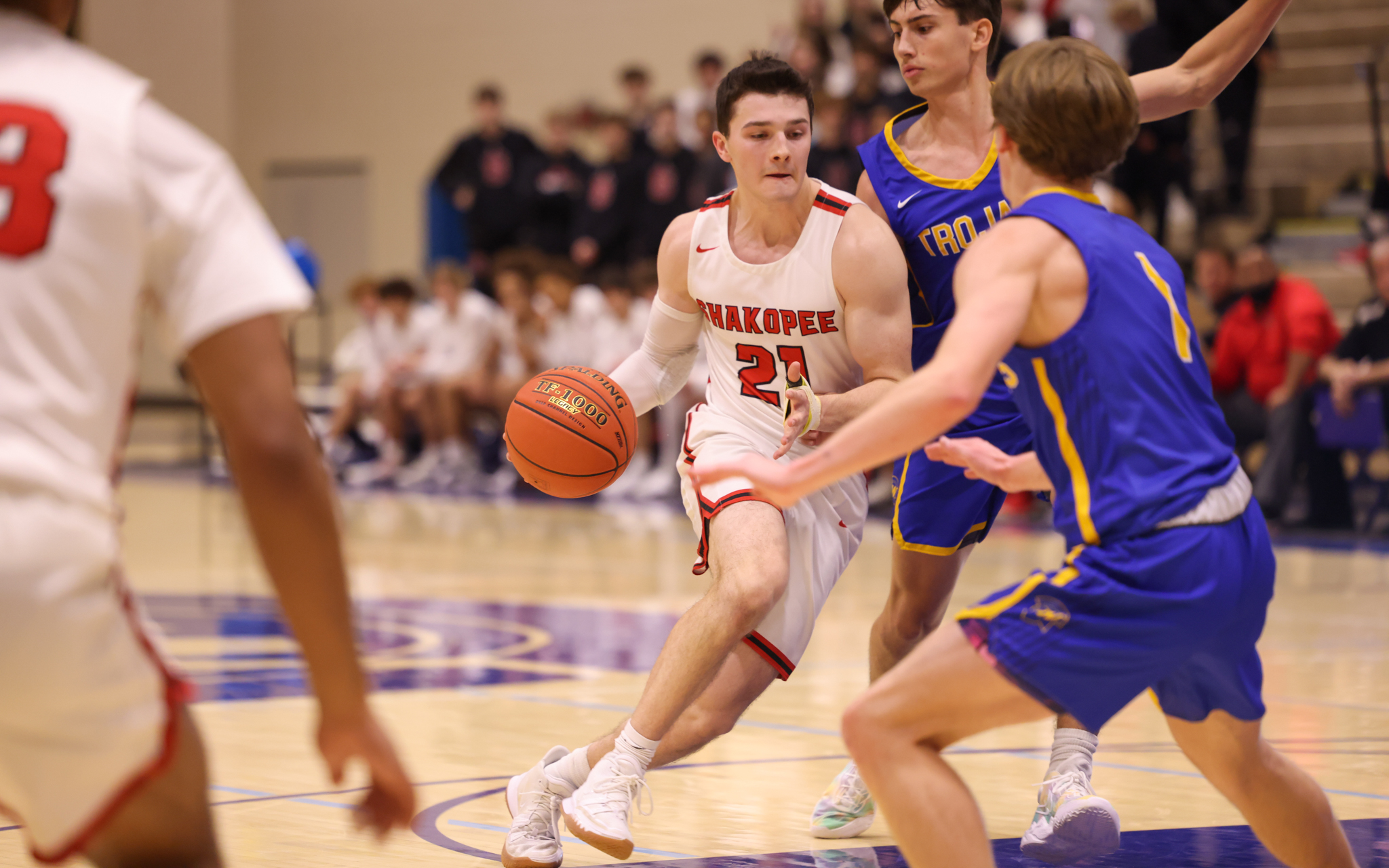 Shakopee's Cade McGraw had a team-high 17 points Tuesday night against Wayzata. The Sabers went on the road to defeat the Trojans 90-87. Photo by Jeff Lawler, SportsEngine

Eight months ago, Wayzata defeated Shakopee 72-43 in the Class 4A semifinals. The Sabers’ season was over, and the Trojans would go on to win the championship.

“It meant everything,” Cade McGraw, who left last season’s semi final with an injury, said about the win. “We believe that we were better than Wayzata already, we had something to prove tonight and we did that.”

McGraw’s coach of the Sabers, No. 4 in the Dec. 8 Class 4A rankings by Minnesota Basketball News, Jake Dammann, put less emphasis on the significance of a non-conference win in December. 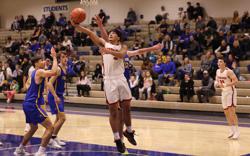 After heading into halftime 38-38, the Sabers were able to establish an 11-point lead with about five minutes left in the game. McGraw, who had four points at halftime due to the stifling defense by Drew Berkland, scored 13 of his team-high 17 points in the second half. “I relied on my teammates to give me more space (in the second half),” McGraw said. “We talked about it at halftime that I was being face guarded and not really being allowed to move a whole lot and we got into a better motion offense to spread things out.”

The other big-time scorer to help establish that lead was sophomore Issac Snell, who scored nine of his 15 points in the second half.

“He doesn’t play like a sophomore from a physicality standpoint and a confidence standpoint,” Dammann said.

The offensive play from the backcourt put the Sabers in a position to beat No. 1-4a Wayzata, and it was the starting five, all seniors, that closed the game out. With 4:30 remaining, the Sabers led 73-64, and the Trojans started applying full-court pressure and fouling to extend the game. From that point on, the Sabers committed one turnover and missed one free throw.

“That was really telling that we had our seniors out there just because last year, a game like that, I don’t know that we would’ve, I don’t think we missed a free throw in the last four minutes of that game. Last year we were not a very good free-throw shooting team at all. I think just that senior mentality and the confidence the guys had when they stepped up there was outstanding and they really did a great job putting the game away,” Dammann said.

This is now back-to-back losses for the Trojans, but they’ve come by a combined seven points against No. 2-4A Park Center and No. 4-4A Shakopee. They were led by Carter Bjerke, who had a game-high 25 points and six rebounds. 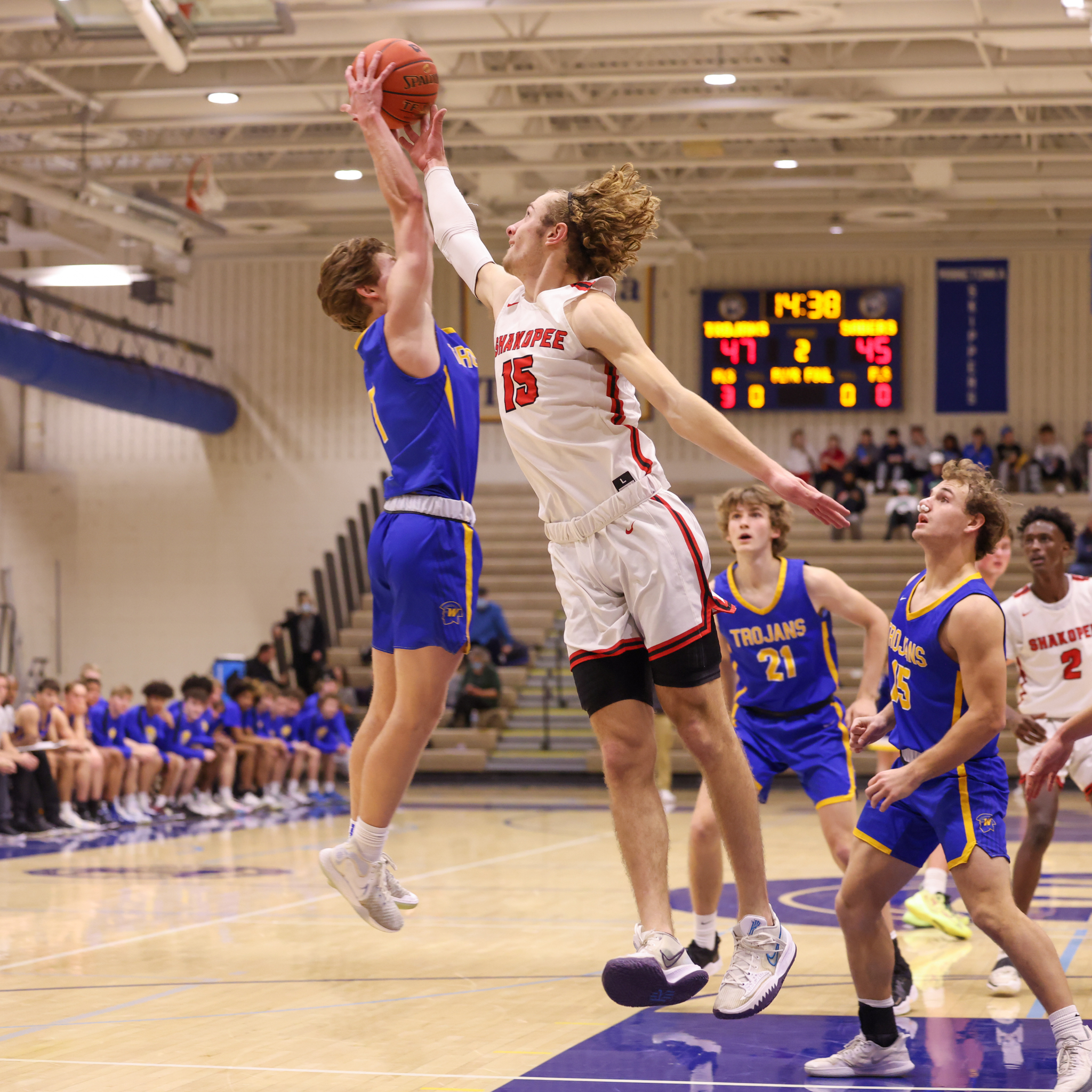 Shakopee's Nick Katona comes up with a blocked shot against Wayzata Tuesday night. Katona added 15 points in the Sabers' 90-87 victory over the Trojans at Wayzata High School. Photo by Jeff Lawler, SportsEngine

Shakopee pulled off a thrilling 90-87 win over the defending Class 4A champions, Wayzata, on Tuesday to remain undefeated early in the season.

Both teams came out with high intensity and had the skill to match, as shots were falling left and right to start the game. The teams headed into halftime all square at 38-38. After more back-and-forth action to start the second half, the Sabers (3-0, 0-0), ranked No. 4 in the Dec. 8 Minnesota Basketball News Class 4A ranking, were eventually able to go on a short run and establish an 11-point lead, the largest either team would have all game.

They were able to hold onto that lead all the way until the final buzzer, but the No. 1-4A Trojans (2-2, 0-0) didn’t make it easy. Constant defensive pressure and big shots made by Hayden Tibbits, Carter Bjerke and Drew Berkalnd kept the game close and even brought the score to 81-78. The Sabers never let it get closer than that, as they made a plethora of free throws down the stretch to come away with the win.

Cade McGraw led the way with a team-high 17 points for the Sabers. He added two rebounds and five assists.

Bjerke led all scorers in the game with 25. He also was the game’s rebound leader with six. 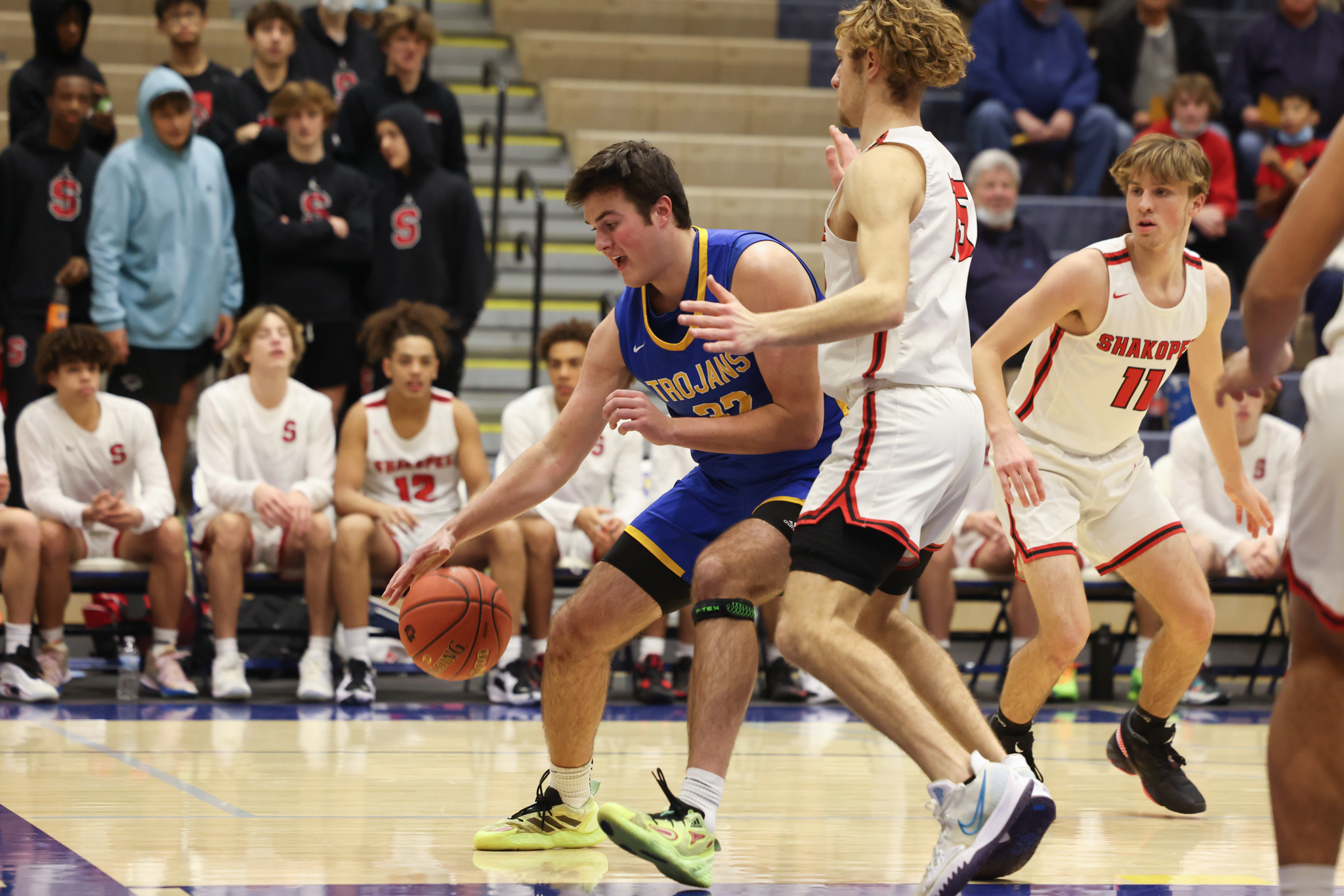 Wayzata's Carter Bjerke looks for room along the baseline against Shakopee Tuesday night. The Trojans fell to the visiting Sabers 90-87 despite Bjerke’s game-high 25 points. Photo by Jeff Lawler, SportsEngine