The 7-1 center received the prize on Thursday, following his dominant senior season which resulted in his Redhawks winning their first Class 3A state title. 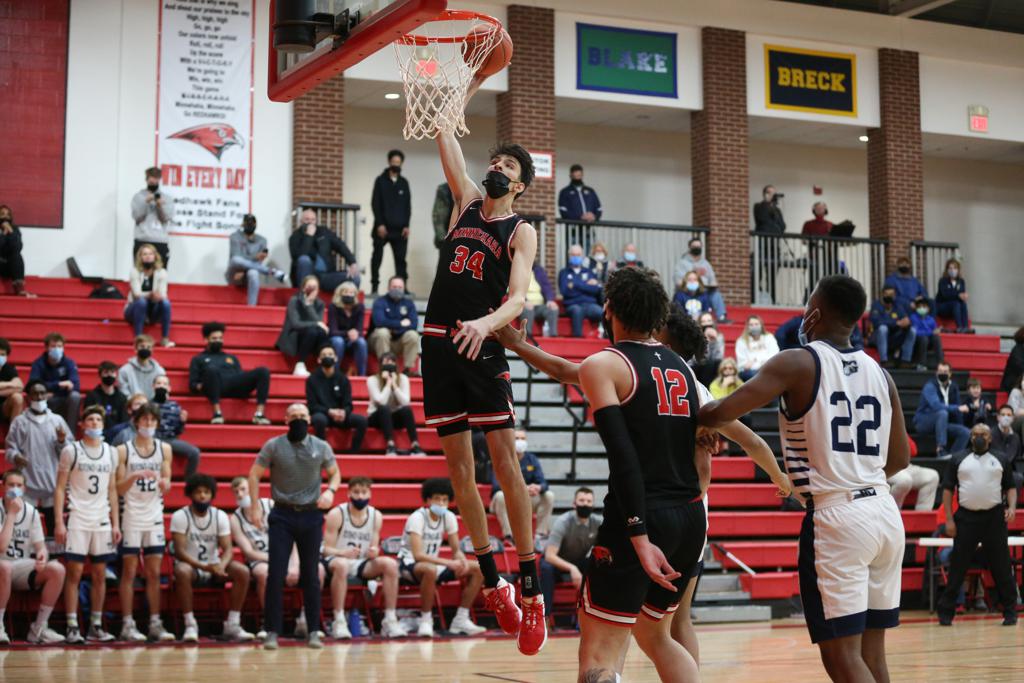 Chet Holmgren (34) was presented the 2021 McDonald Award on Thursday. He was also this year's Mr. Basketball recipient and the Star Tribune's Metro Player of the Year. Photo by Jeff Lawler, SportsEngine

Another Redhawk has claimed the McDonald Award, as Chet Holmgreen of Minnehaha Academy was announced the recipient of the 2021 Minnesota Basketball Coaches Association’s top senior award yesterday.

The 7-foot-1 center, who is committed to Gonzaga, received the prize from Joel McDonald, the head coach at Hibbing and son of the late Bob McDonald, the namesake for the honor who coached at Chisholm and won 1,012 games over a 59-year career.

Holmgren, who was also chosen this year’s Mr. Basketball and the Star Tribune’s Metro Player of the Year, capped his senior season scoring 21 points a game to lead Minnehaha Academy to its first Class 3A state championship. The Redhawks, who lost just one game this past winter, had previously won three consecutive Class 2A titles before moving up to a larger-school class prior to the 2019-20 season, which ended early due to the COVID-19 pandemic.

In addition to his scoring prowess, and for his ability to slip outside and contribute from the floor like a guard, Holmgren is known for his 7-foot-6 wingspan and for being an excellent shot blocker.

Patterned after the Wooden Award, which is presented annually to the top NCAA Division I player in both men’s and women’s basketball, the McDonald Award is not to be confused with the state’s Mr. Basketball honor. The coaches’ association considers the following criteria when choosing a recipient: overall performance during the season, strength of character both on and off the court, contribution to overall team effort, and whether a player excels at playing both offense and defense.

The previous recipients of the honor are Jalen Suggs from Minnehaha Academy (2020), Matthew Hurt of Rochester John Marshall (2019) and Apple Valley’s Tre Jones (2018).

Suggs, who is coming off a runner-up finish in this year’s NCAA Division I tournament with Gonzaga, is expected to be picked early in the first round of this year’s NBA draft, which will be held in July. Suggs produced 14.4 points, 5.3 rebounds and 4.5 assists per game in his only collegiate season. Hurt, meanwhile, had a productive sophomore season at Duke, scoring 18.3 points per game. Jones also played collegiately at Duke, until being selected by the San Antonio Spurs in the second round of the 2020 NBA Draft.