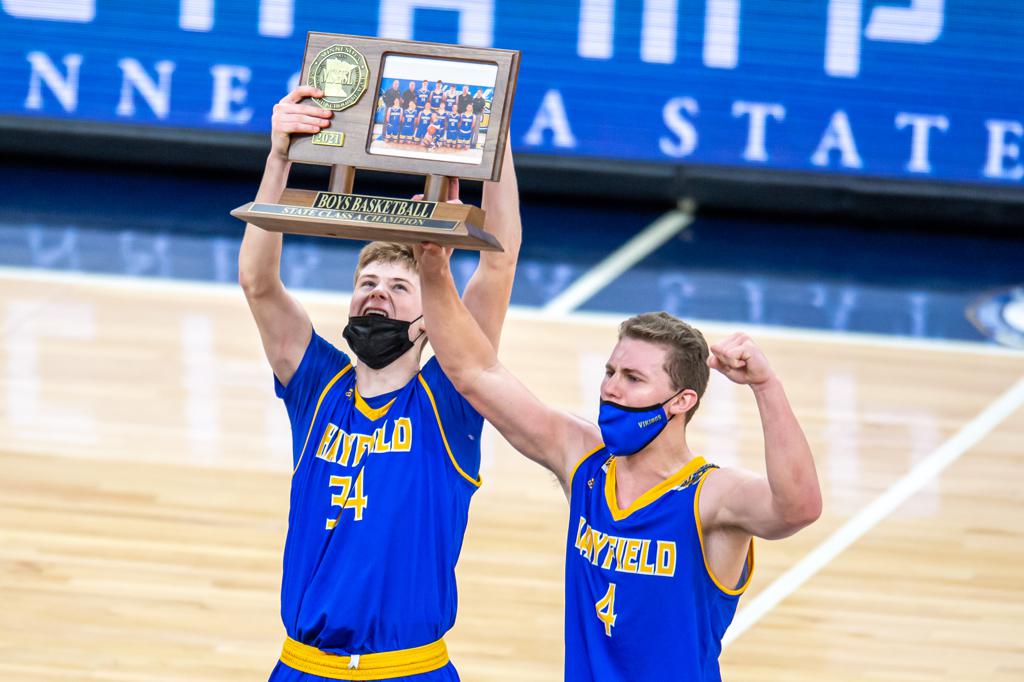 “I’m so proud of him and his teammates,” said Slaathaug, interviewed 30 minutes after the game. “I just stopped crying five minutes ago.”

Slaathaug guided Fulda to Class 1A girls’ basketball state championships in 2006 and 2007. The Raiders also reached the state tournament in 2002 and 2003 under Slaathaug.

“No disrespect to the Fulda girls, but the feeling isn’t even close when one of your own kids wins a state championship,” said Slaathaug, now Hayfield’s school superintendent. “Wow!”

Ethan Slaathaug has been selected to play in the Minnesota High School Basketball Coaches Association All-Star Series later this month. The 6-3 senior guard, who averaged over 25 points per game this season, will make his college selection in the near future.

“A lot more opportunities have opened up for him recently,” Slaathaug said.

Yet they are close when it comes to state tournament success.

The Redhawks’ victory on Saturday moved Johnson  to a sterling 15-2. Winning games at an 88.2% clip vaults him past McKenzie (87.5), who has gone a combined 21-3 with North and Minneapolis Patrick Henry.

“I don’t put a lot of stock in those percentages,”  Johnson said. “But he’s a Hall of Famer, so it’s an honor to be up there with him.”

Waseca coach Seth Anderson wanted to give his players as close to a state tournament experience as possible, so after practice Friday, the Blue Jays headed north.

“With the pandemic going on and everything, it hasn’t really been a true state tournament type feel or atmosphere,” Anderson told Mary Rominger of KEYC-TV in Mankato. “The least we can do for the kids is get them up and spend one night in the hotel and get that camaraderie.’’

Historic officiating crew
The Class 4A championship game featured an all-Black officiating crew for the first time in state tournament history. Craig Laird, Lamarr Sullivan and Ricky Spencer made up the crew.

The move was to honor Jimmy Robinson, longtime MSHSL coordinator of officials who was the first Black official to work a state tournament game in 1971. Robinson, 88, died in November. All tournament officials wore commemorative patches on their sleeves in his memory.

Holmgren honored
Another day, another award for Chet Holmgren. Minnehaha Academy’s one-of-a-kind 7-footer (actually, 7-foot-1) was named the Sports Illustrated All-American Player of the Year on Friday, adding to the list of honors and awards he’s collected this season. The Star Tribune’s Metro Player of the Year has already won the Naismith Award, the Wootten Award and has been named to the McDonald’s All-America team and was selected to the USA Nike Hoop Summit team. He is expected to be named Minnesota’s Mr. Basketball when the award is announced next week.