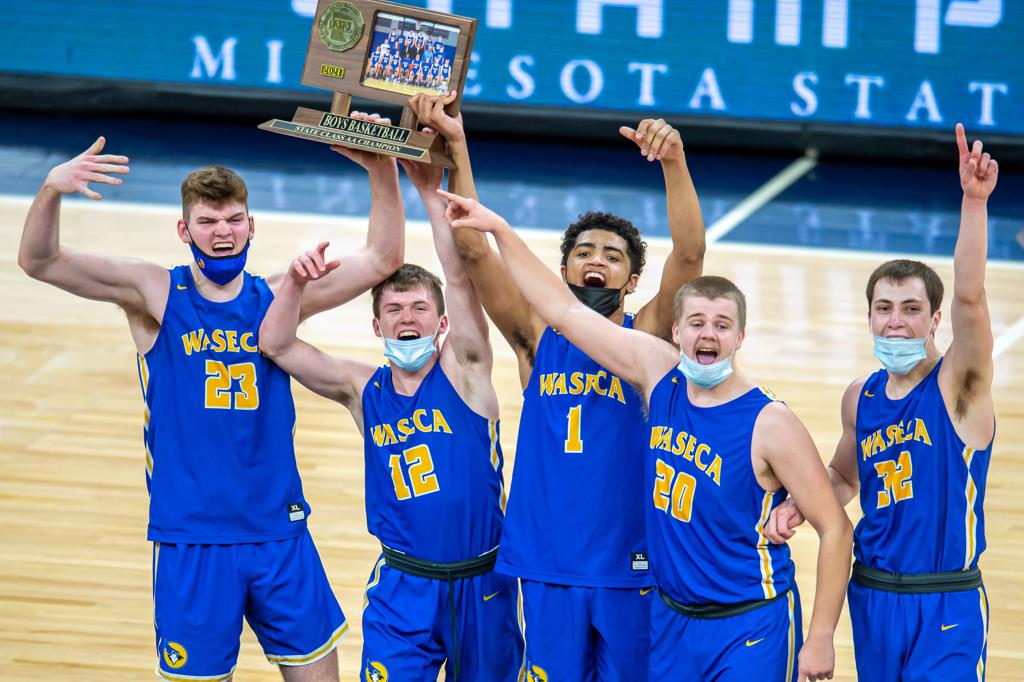 Ball in his hands and time winding down, Ryan Dufault wasn’t sure what he was going to do.

Waseca’s mercurial senior guard was holding the Bluejays’ state championship hopes in his hands in a tie game. The lefthanded Dufault drove to his strong side, used a screen from teammate Matt Seberson, sidestepped two defenders, and pulled up from the baseline, 12 feet from the basket.

His shot nestled softly in the net with 2.3 seconds left, giving Waseca a 51-49 victory over tall and tough Caledonia in the Class 2A championship game.

“I just did what came naturally,” said Dufault, who led Waseca in scoring with 23 points. “As soon as I shot it, I knew it was going in. When you’re young, you dream about doing that. I’m just happy for the whole team.”

The Bluejays, normally a strong shooting bunch, overcame a game in which they made just 18 of 60 field goal attempts with a defensive effort that forced Caledonia (23-2) into 20 turnovers.

“One of the things we’ve been good at all year was creating turnovers and turning them into offense,” Waseca coach Seth Anderson said. “We weren’t very good offensively so it’s good we were good defensively. That’s one of the hardest things to do, stay focused when you’re not shooting well and have the discipline to keep playing good defense.”

Caledonia’s physical lineup proved difficult for Waseca’s offense to solve. Senior forward Andrew Morgan, a 6-9 Mr. Basketball finalist, was held to just nine points by the Warriors, who surrounded him each time he got the ball inside.

Caledonia trailed most of the game but took a brief lead in the second half on 6-5 guard Austin Klug’s layup with 8:41 left.

Waseca responded with a 9-2 run to build a six-point lead. But Klug, who was terrific all game, led the Warriors on a 6-0 run to tie the score 49-49 with 1:37 left, setting up Dufault’s heroics.

Anderson said the victory brought a combination of joy and relief. Waseca has been ranked among the state’s best Class 2A teams for the last two seasons, but expectations brought with them added pressure. Waseca last won a state championship in 1918.

“In all honesty, this is the first time I’ve taken a deep breath in the last three years,” Anderson said. “We’ve been doing all the work and we kept grinding and grinding. To finally get to the championship game and win it is one of the best moments of our lives.”

Ryan Dufault’s pull-up jumper from the baseline with 2.3 seconds left broke a tie and lifted Waseca (23-1) to a 51-49 victory over Caledonia in the Class 2A championship game.

Waseca led by six, 49-43, late in second half, but Caledonia rallied to tie the score on a short shot by Sam Privet with 1:37 left. 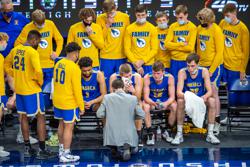 Waseca, which went into the game as the No. 1 team in Class 2A, survived a tough day of shooting, making just 30 percent of its shots from the floor.

But Dufault’s shot was true, giving him a team-high 23 points.

Caledonia's Jackson Koepke heaved a last-second shot from near midcourt bounced off the rim and backboard at the buzzer.