Tourney tidbits: Stillwater's Willie Taylor steps down as coach so he can watch another young player

News and notes from both tournaments Wednesday, including a Hayfield rebounding machine, a 3A girls' rematch, a Caledonia battler extraordinaire and Minneota excellence. 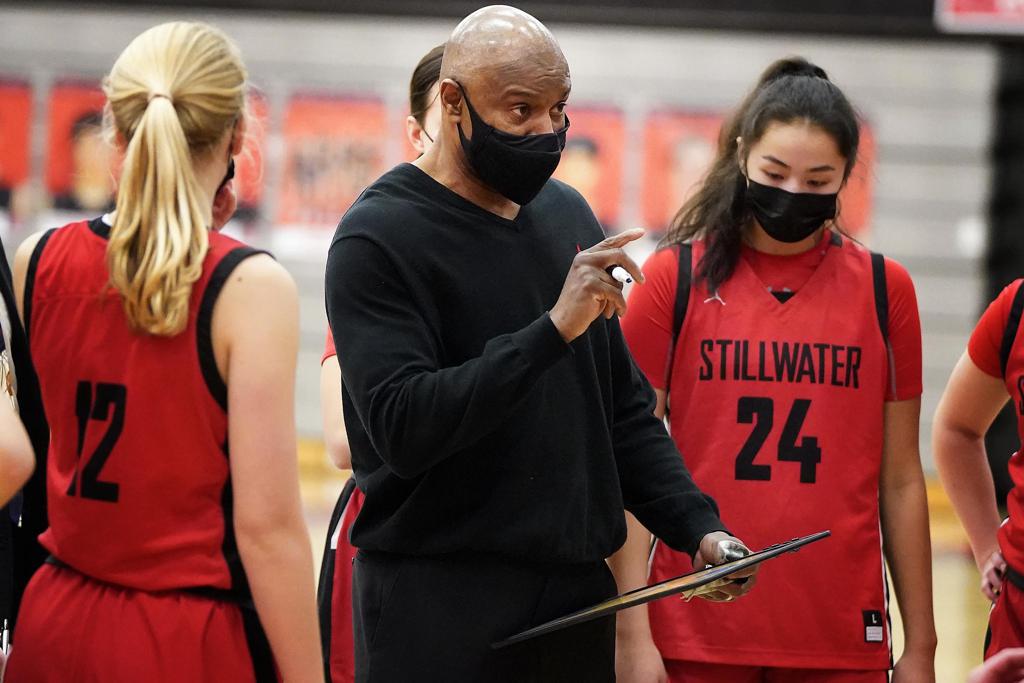 Willie Taylor, among the most decorated girls’ basketball coaches in state history, has stepped down after seven seasons at Stillwater.

Taylor led the Ponies to the past three state tournaments. He won Class 4A state titles at St. Paul Central in 2007 and 2008, and recently surpassed 500 career victories. But there’s another basketball player who he wants to see grow.

“My daughter is going to be a ninth-grader at St. Paul Academy and I’ve been coaching other kids her whole life,” Taylor said. “I’d like to be around her more than I’ve been able to be.”

Taylor, a 2009 inductee into the Minnesota Girls’ Basketball Coaches Association Hall of Fame, said he plans to coach again “when the situation is right. It’s in my blood.”

Rebound machine
Hayfield’s Easton Fritcher has been getting noticed for his rebounding efforts.

Last week in the Vikings’ 62-43 victory over Legacy Christian in the Class 1A quarterfinals, Fritcher, a 6-0 junior forward, had 29 rebounds —three shy of the state tournament record of 32, by Proctor’s Bob Laney in 1964.

On Wednesday, Fritcher had five points and 15 rebounds in the Vikings’ 79-53 semifinal victory over Badger/Greenbush-Middle River.

“He’s a great athlete,” Hayfield coach Chris Pack said. “He already has several offers to play Division I baseball. He plays so hard. His mentality is that he’s going to get every rebound. He just outworks everybody.”

The record for most rebounds by an individual in a three-game state tournament is 69 by Laney in 1964.

3A girls’ rematch
Becker girls’ basketball coach Dan Baird clearly remembers the last time the Bulldogs faced Marshall, who they will play in the Class 3A title game Friday.

In the 2019 Class 3A quarterfinals, Becker rallied from a 16-point first-half deficit, then lost a 14-point second-half advantage. The Bulldogs pulled it out 68-67 on a three-pointer by Courtney Nuest at the buzzer.

Many of the players on both teams, including Nuest, will take the court in the final.

“We were really young in that game against Marshall,” Baird said. “It was a great game. … I’m sure Marshall wants revenge and now we get to play in the championship game. It’s a great a story line.”

Bloodied, not beaten
Caledonia senior forward Casey Schultz walked over to the Warriors bench, blood around his left eyebrow and running down his face.

Schultz took an inadvertent elbow to the head while converting a layup late in the Warriors’ 60-55 victory over Minneapolis North in the Class 2A semifinals. He gave way to junior Ja’Shon Simpson, who made the free throw to convert the three-point play.

“Casey is a competitor, relentless,” Caledonia coach Brad King said. “Our trainer had a tough time trying to stop the bleeding, so he could get back on the court.”

The bandaged Schultz returned in time to dive and force a key turnover with Caledonia up two with 28 seconds left. The reward for his effort, Penn State football recruit Davon Townley, a 6-6 and 220-pound defensive end, coming down squarely on his back near midcourt. Schultz, 6-4 and 230 pounds, is a North Dakota football recruit.

“We told him that ‘scars get the girls’ and he was happy with that,” King said, laughing. “He will probably need stitches.”

Two-sport Minneota
Minneota lost in the Class 1A volleyball championship match in 2017 before winning the 2018 and 2019 state titles. The 2020 volleyball state tournament was not held because of COVID-19.

The Vikings made it to the Class 1A basketball tournament in 2018 and won the 1A championship in 2019. They reached the 1A semifinals last year before the tournament was canceled.

While a number of the current Minneota players have been previous state tournament participants, two have played in every one: senior guard Abby Hennen and junior forward Natalee Rolbiecki. Both have played significant roles for each team and played four championship games across the two sports.