Led by Chet Holmgren's 25 points and with 10 players scoring, the Redhawks controlled the game throughout en route to a 79-58 victory. 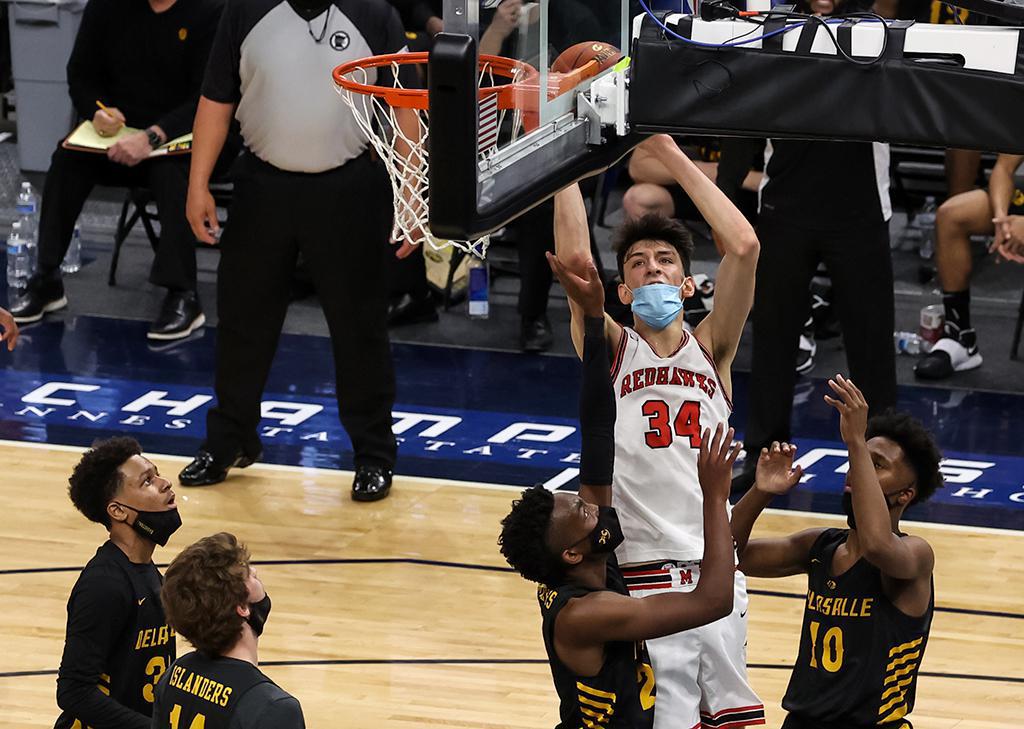 Minnehaha Academy's Chet Holmgren (34) scored from the low post over the heads of four DeLaSalle defenders in the first half Thursday of the Class 3A semifinal at Target Center. Photo: Cheryl A. Myers, SportsEngine

So much has been made about the versatility of Minnehaha Academy’s 7-foot-1 forward Chet Holmgren that it’s easy to forget he excels in traditional roles, too.

He dominated in the lane in the first half of the Redhawks 79-58 Class 3A semifinals victory over DeLaSalle with 19 points and 10 rebounds before the break. Most of those points and many of those rebounds came right around the basket, where his size and wingspan gave him a considerable advantage.

“We knew we had a height advantage, so we insisted this week he do some rim-running,” Minnehaha Academy coach Lance Johnson said. “We wanted to get it inside.”

Johnson admitted the Redhawks (19-1) had gotten a little sloppy in their execution in the past few weeks, but saw much to be pleased about in Thursday’s victory. Most notably, the way the played defense and got their transition game going.

“Defensively, we were locked in,” Johnson said. “They were doing what we told them to do.” 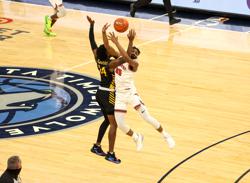 Johnson said his team is much better when they force the issue offensively. With a spark provided by guard Donovan Smith, who missed much of the season with a broken hand prior returning in the quarterfinals, the Redhawks were able to generate frequent open looks at the basket.

Any of those shots that were missed were cleaned up by Holmgren.

“We ran the court really well,” Johnson said. “When we’re in transition, we’re a much better team offensively.”

Minnehaha Academy’s mantra all season was getting back to the state championship game, in which they played, and won, three years in a row prior to last season’s Covid-cancelled tournament. With a finals berth on the line, Johnson said he thought the Redhawks played with renewed purpose.

“I think against some teams, we may have been bored,” he admitted. “But being at the state tournament, and especially at Target Center, where we’ve had success, motivated us. They knew they had to play well today to play in the championship game.”

Holmgren finished with 25 points and 16 rebounds, although he didn’t record a blocked shot, a testament to how well Minnehaha Academy played team defense. Smith added a season-high 15 points and Mercy Miller had 10.

DeLaSalle (15-6), which had won seven of the last eight Class 3A championships, including six in a row from 2012 through 2017, got 16 points from Nasir Whitlock and 13 from Cade Haskins.

Thursday is exactly what Minnehaha Academy was hoping for.

With Chet Holmgren controlling play on the interior, Minnehaha Academy finished the first half on a 9-0 run to take a 38-19 halftime lead. Holmgren had 19 points and 10 rebounds at the break.

The Redhawks spread the scoring in the second half. Donovan Smith, who missed much of the season with a broken hand, provided a spark, scoring eight consecutive points out of the break and finished with 15 points.

Ten players scored for Minnehaha Academy, led by Holmgren’s 25 points. The Redhawks shot 56.7 percent from the floor (34 of 60).