Who wins in the semis on Wednesday and Thursday?

Going 12-4 in the quarterfinals has our guy feeling it. See how he landed in all four classes. 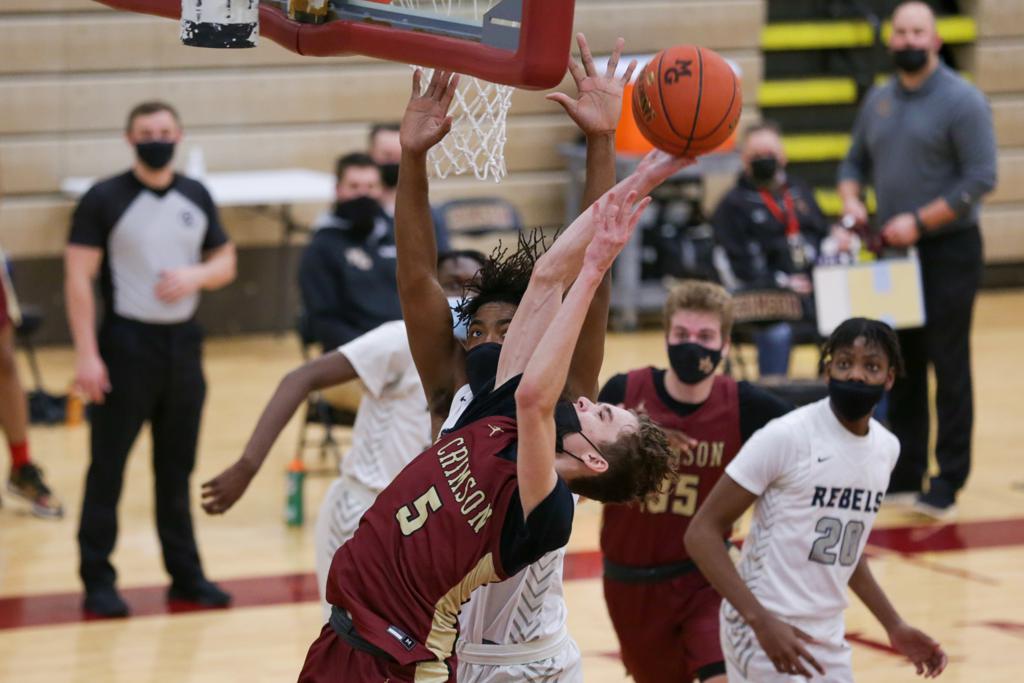 Playing in a conference against the likes of Champlin Park, Morgan Moore (5) and the Crimson are better than their record suggests, our guru says. Photo: Jeff Lawler, SportsEngine

A 13-3 mark picking quarterfinal game in the girls’ tourney followed by a 12-4 record on the boys’ side. Three No. 1 seeds fell in the boys’ event, one of which I called successfully.

Let’s see if I can be even better in the semifinals. Remember, these are not prognostications, just informed guesses. Away we go:

Class 4A
Cretin-Derham Hall vs. Maple Grove: Don’t be misled by Maple Grove’s 13-9 record. The Crimson played in the best conference (Northwest Suburban) and are primed for this matchup. Cretin-Derham Hall junior guard Trejuan Holloman will be the best player on the floor, but will need help from his supporting cast. Maple Grove will sneak past the Raiders with its balanced attack.

Shakopee vs. Wayzata: Sabers coach Jake Dammann previously served as an assistant under Wayzata coach Bryan Schnettler. He knows Schnettler and his players all too well. Dammann would love to see a game in the 40s while Wayzata excels in getting up and down the court. The Trojans, the most talented team left in the 4A field, march into the championship.

Class 3A
Alexandria vs. Richfield: Treyton Thompson, where are you? The 6-11 center and Gopher recruit left the Cardinals for a prep school in Indiana. They could use him to slow Richfield senior guard Lamar Grayson, who continually gets to the rim for layups. I’m off to Bridgeman’s for another La La Palooza after the Spartans’ victory.

DeLaSalle vs. Minnehaha Academy: No slight against the current Islanders, but this would be a more even matchup against some of the DeLaSalle teams of the past. Per usual, 7-0 senior Chet Holmgren controls the paint on defense while the Redhawks defend the perimeter and get out and run. Minnehaha Academy gradually pulls away for the victory.

Class 2A
Caledonia vs. Minneapolis North: A great matchup of teams with a rich history and toughness. Caledonia is 22-1 despite the absence of its best player, junior guard Eli King. The Warriors are athletic, skilled, have size and are disciplined. The Polars have plenty of athleticism, but the Warriors won’t be rattled. Slight edge to Caledonia in a donnybrook.

Fergus Falls vs. Waseca: Wouldn’t it be fun to put Waseca with the other two semifinalists and play a round-robin event. The winner, if any would go 2-0, would be a true champion. Fergus Falls, the odd team out in that scenario, faces a tough task against the Bluejays, my pick to advance.

Class 1A
Hancock vs. Sleepy Eye St. Mary’s: In the tournament’s most wide open class, the No. 1 and 2 seeds in the North and South are out. Hancock, one of the two No. 4 seeds remaining, sees its season come to an end. Sleepy Eye St. Mary’s avoids following its girls’ team’s fate on Tuesday and moves on to the championship.

Badger-Greenbush-Middle River vs. Hayfield: I like the Gators being from the northwestern portion of Minnesota. It might have to do with global warming and the thought of a future retirement destination. But I’m going against all odds and picking the Vikings to win back-to-back games. That’s right, Skol!