The winner, the state's top senior player as determined by the Minnesota Basketball Coaches Association, will be revealed following the completion of the season. 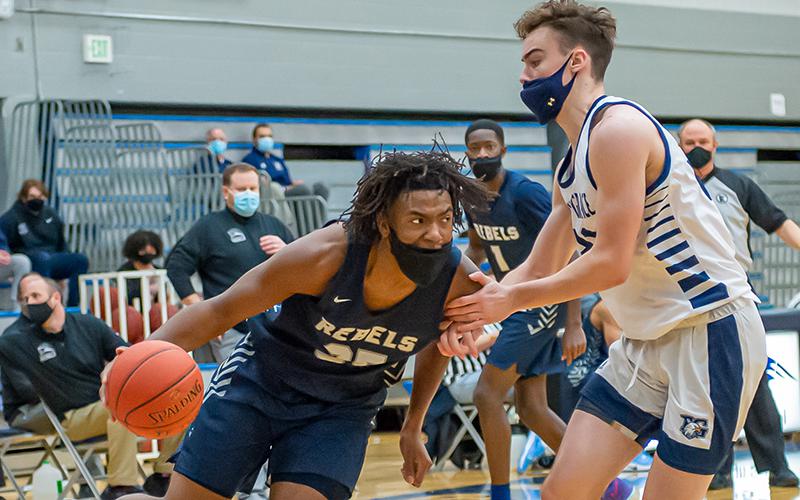 Francis Nwaokorie (left) of Champlin Park was one of 10 McDonald Award finalists revealed on April 3. The fourth recipient of the prize will be unveiled after the season concludes. Photo by Earl J. Ebensteiner, SportsEngine

The Minnesota Basketball Coaches Association released its list of 10 finalists for the 2021 McDonald Award on Saturday, trimming its register after 30 players were chosen to the semifinalist pool in mid-March.

The honor is presented annually to the state’s top senior player upon completion of the season, as determined by the coaches’ association.

Champlin Park, which bowed out of the Class 4A state tournament following a 70-61 upset loss to Maple Grove in a quarterfinal matchup on March 31, got 19.8 points and 13.2 rebounds per game from Nwaokorie this year. The 6-foot-7 University of California San Diego commit had 31 points in the Rebels’ loss to the Crimson.

Townley’s Polars are still playing, as Minneapolis North toppled Moose Lake-Willow River 71-40 on March 31 in a first-round tilt in the Class 2A state tourney. The 6-foot-7 Townley has averaged 14.9 points a game this year.

Another finalist who’s still in the hunt for a state title is Holmgren. The 7-1 center, who is regarded as the top recruit in the nation, according to ESPN, will have his Redhawks in contention for the Class 3A state championship if they beat DeLaSalle on April 8 in the semifinal round. Holmgren averages a team-best 20.9 points per game

Named after the late Bob McDonald, the Chisholm coach who won 1,012 career games over 59 years, the McDonald Award is not to be confused with the state’s Mr. Basketball honor. Patterned after the Wooden Award, which is presented annually to the nation’s top Division I player in both women’s and men’s basketball, the coaches’ association considers the following criteria when selecting a recipient: overall performance throughout the season, strength of character (both on and off the court), whether a player excels at playing both offense and defense, and contribution to overall team effort.

The McDonald Award is now in its fourth season. The first recipient of the honor was Tre Jones from Apple Valley, who played collegiately at Duke before being taken by the San Antonio Spurs in the second round of the 2020 NBA Draft.

Matthew Hurt of Rochester John Marshall received the prize in 2019 and Minnehaha Academy’s Jalen Suggs was the recipient a year ago. Hurt is coming off a standout sophomore year at Duke, scoring at a clip of 18.3 points per game. Suggs, meanwhile, has already became a superstar for Gonzaga, as the freshman nailed a long-range shot in overtime on Saturday to push his Bulldogs past UCLA 93-90 to reach this year’s NCAA Division I national title game. Suggs has averaged 14.1 points, 5.5 rebounds and 4.6 assists per game for Gonzaga.