Cooper headed back to Class 4A, Section 6 title game after win over Armstrong

The Hawks led by 22 points at the half over the Falcons and didn't let go of the lead in the second. 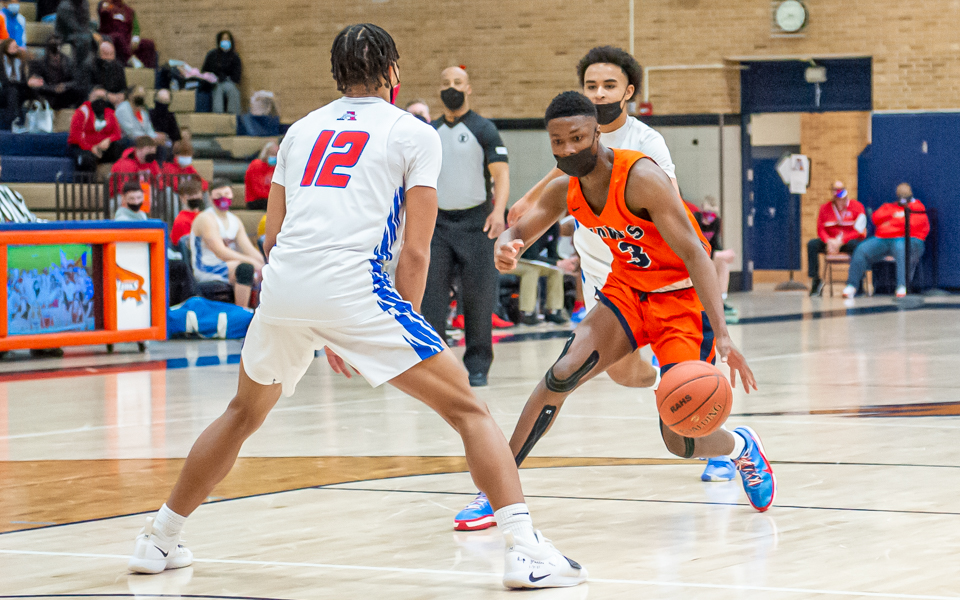 Robbinsdale Cooper’s Prince Appiah (3) drives to the basket Friday night. Appiah had 17 points in a 84-57 victory over Robbinsdale Armstrong in the Class 4A, Section 6 semifinal. Photo by Earl J. Ebensteiner, SportsEngine

Robbinsdale Cooper coach Bo Powell was quick to point out after Friday’s game that his team likes to play fast and make their opponents do the same.

For the limited crowd in attendance, that strategy was obvious from the moment the ball was tipped as the Hawks immediately went for turnovers, employed a full-court press on defense and were quick to get to the basket and score. Before five minutes had passed in the game, the Hawks boasted a 17-4 lead.

Eventually, that lead blossomed to more than 20 and stayed there for the rest of Friday’s contest. Cooper hardly let up and came away with an 84-57 win against Armstrong at Cooper High School in the Class 4A, Section 6 semifinals. That win sends the Hawks to next week’s section final.

Powell said that throughout the year, his team has met plenty of opponents that are uncomfortable with a faster pace. Thus, his team tends to try and speed things up. 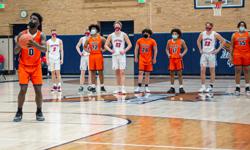 “We’re not very big, so we have to get up and pressure the ball,” Powell said. “It’s like controlled chaos. [The opposition is] not used to that. We want to try and speed them up and make them do things they don’t want to do.”

That starts defensively for Cooper (15-2, 11-1). From the moment the opponent is ready to inbounds the ball, the Hawks are there hovering over each player, ready to pounce and force a turnover. It’s a defensive strategy that has been perfected over the course of three to four years.

“We’ve worked on this year after year,” Powell said. “Now, they understand it and we can tweak things. We can adjust and can switch on the fly.”

To make the full-court press work, Cooper needs all five players on the floor to work together. That appeared to be the case on Friday and transferred over to the offensive end of the floor. Four Hawks scored at least 10 points in the game, including junior Davion Evans. He scored a team-best 23 points in the win.

“We usually have three to four guys in double figures,” Powell said. “They’re good teammates. Sometimes, it feels like they pass too much. They’ve adapted to each other and work with each other.”

Right behind Evans was junior Prince Appiah, who finished with a double-double as he poured in 17 points to go along with 13 rebounds.

The Hawks lost just two games all season, one in the season opener to Chaska and another to DeLaSalle on March 2. However, that doesn’t mean the Hawks feel like they’ve gotten the adequate amount of attention.

“Nobody gives our kids that much credit,” Powell said. “Nobody talks about them, nobody comes to watch them. It’s fine. They go out and play hard and are good teammates. We’re just trying to chip away and get better.”

Besides this year’s success, the Hawks made it to last year’s Class 4A, Section 6 final, losing to Hopkins. That means Cooper has made the section final in each of its first two years after making the jump from 3A to 4A.

“Every game we just feel like we’re the underdog,” Evans said. “We just want that respect.”

If the Hawks, ranked No. 4 in Class 4A by Minnesota Basketball News in its final poll of the season, are going to jump onto the radar of some, Thursday’s section final on the road against No. 2-4A Wayzata seems like the perfect chance. In Cooper fashion, the game plan appears to be centered around a fast approach.

“We’re going to try and speed them up and make them play fast,” Powell said. “They have shooters. That makes it a lot harder. We’ve got to be a little bit more disciplined.” 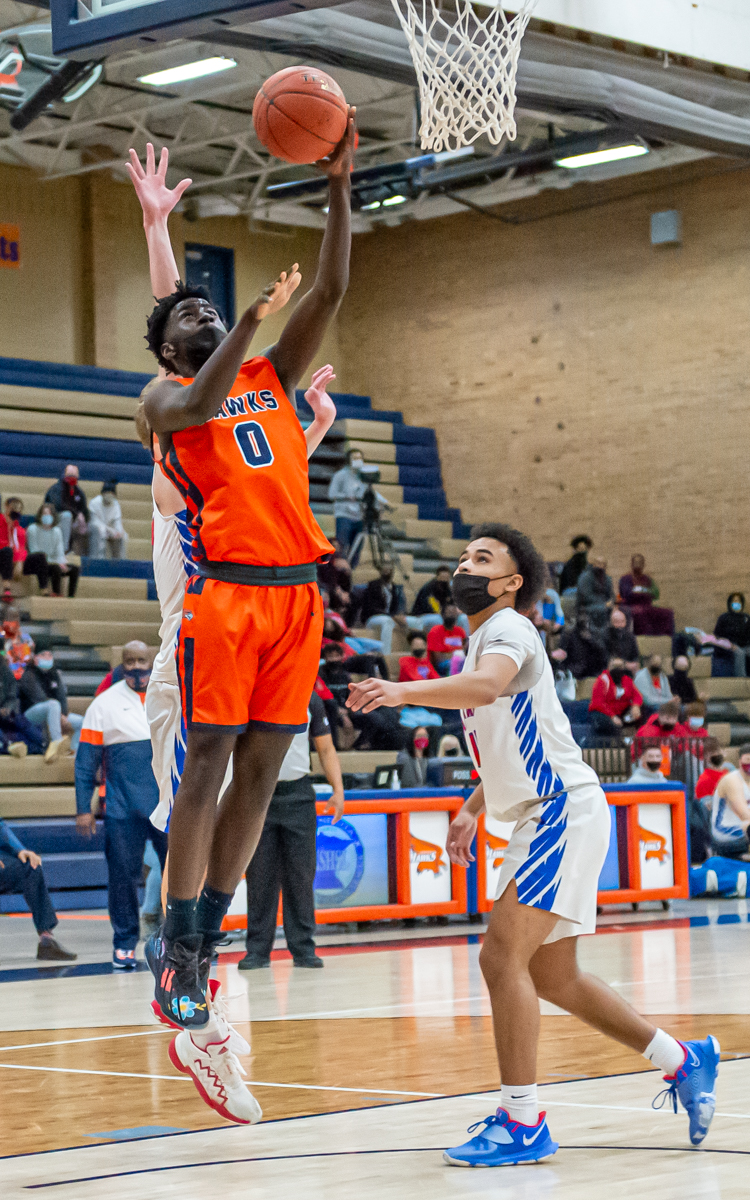 The Hawks’ Davion Evans (0) had a game high 23 points in the Hawk’s 84-57 win over the Falcons Friday night at home in the Class 4A, Section 6 semifinal. Photo by Earl J. Ebensteiner, SportsEngine

Facing nearby rival Robbinsdale Armstrong, Cooper had little issue as the second-seeded Hawks rolled past the Falcons 84-57 on Friday to advance to next week’s section final against Wayzata.

From the opening tip, Cooper (15-2, 11-1) made life tough for Armstrong on both ends of the floor. Defensively, it started with the Hawks’ full-court press, which played into the Falcons’ 17 turnovers.

Offensively, Cooper used those turnovers along with a balanced attack to build a lead that was at least 20 points most of Friday’s game.

Junior Davion Evans was one of four Hawks in double figures on Friday. He finished with a team-best 23 points. Meanwhile, junior Prince Appiah chipped in a double-double with 17 points and 13 rebounds.

To round out the double-figure scoring, seniors Broderick Powell and Tyson Dallas each added 10 points.

Armstrong (12-8, 8-4) saw its season draw to a close due to its inability to keep up with high-flying Cooper. One bright spot for the Falcons was senior D’Sean Larkins. In his final high school basketball game, he scored a team-high 20 points.

The only other Armstrong player to crack the 10-point mark was freshman Seth Newbern, who finished with 13 points. 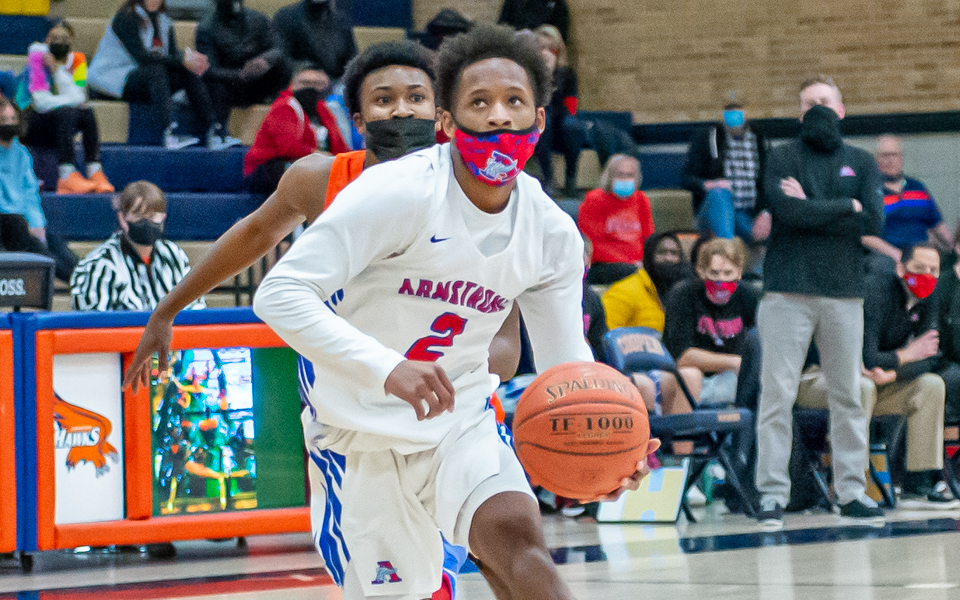 The Falcons’ D’Sean Larkins put up 20 points Friday night in the Class 4A, Section 6 semifinal. The Falcons fell to the Hawks 84-57 at Robbinsdale Cooper High School. Photo by Earl J. Ebensteiner, SportsEngine