Bradley Cimperman’s three-pointer with seconds left in Friday’s game gave the Royals the win after they surrendered a second-half lead as big as 12 points. 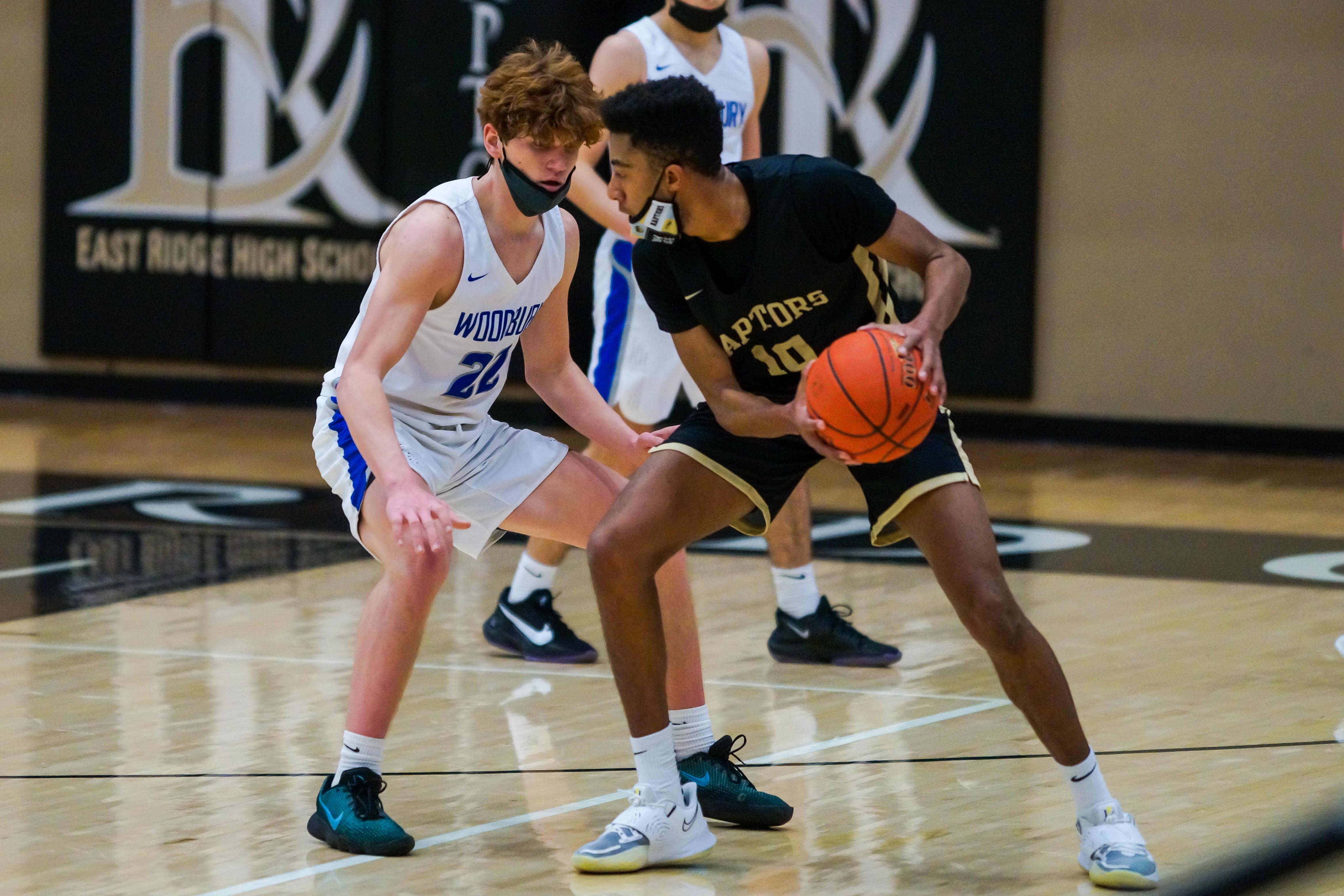 Woodbury players and coaches exited the court at East Ridge after Friday’s game in a giddy mood, high-fiving and cheering. Meanwhile, the East Ridge coaching staff stood in a circle near the team bench, lamenting the final seconds of the game.

It would’ve been hard to imagine that’s how the two teams would feel following the game after things had been going just minutes earlier.

The Raptors had erased a 12-point deficit against Suburban East Conference rival Woodbury and pulled ahead in the game’s final minutes. With just seconds left, however, Royals senior guard Bradley Cimperman dropped a three-pointer to put Woodbury ahead 48-47, setting up a 50-47 Woodbury victory to extend the team’s winning streak to seven games.

The game itself played out in a similar manner to the teams' first meeting on Feb. 9. Woodbury (8-3) held a double-digit lead after the first half. Then, East Ridge closed the gap before the Royals emerged with a 64-62 win.

One difference from the first game was the absence of scoring from Cimperman. He poured in 14 points in the first meeting but didn’t score in the first half of Friday’s game. Prior to the last-second three-pointer, he had just three points and had made just one shot.

Despite the low-scoring night, Woodbury coach Kent Getzlaff knew the ball was going to Cimperman, who entered the matchup averaging 12 points per game. That’s second best on the team behind senior guard Devin Padelford, who had six points Friday and averaged 12.3 points per game prior to the victory. 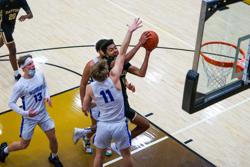 “He’s our leader,” Getzlaff said of Cimperman, who has been a three-year starter at Woodbury. “He’s our best shooter. The only question was what action we were going to use to get him the ball.”

The scoring lulls from Cimperman and Padelford likely contributed to times when the Royal offense struggled to score Friday. Senior guard Mac Lockner did his best to pick up the slack with a 16-point performance, including 11 first-half points.

Another reason for the lack of scoring, however, came courtesy of East Ridge’s defense. The Raptors (5-5) held Woodbury off the scoreboard for nearly seven minutes to open the game thanks to their playing effective zone defense. It was the first time the Royals had seen a zone defense since the season-opener, a 51-44 loss against Forest Lake on Jan. 15.

“That game feels like a really, really long time ago,” Getzlaff said. “Their length makes that zone really disruptive. Those guys did a really good job using it. That really slowed the game down.”

East Ridge applied more defensive pressure in the second half via a full-court press, which led to Woodbury turnovers and the Royals’ lead disappearing.

Woodbury eventually righted the ship, never letting the Raptors’ lead get above five points. The Royals got their key basket from Cimperman in the game's waning seconds and senior forward Donald West, who finished the game with 14 points, made clutch free throws late.

Getzlaff attributed the team’s successful finish to the confidence they’ve gained during their winning streak.

“Our confidence level was evident in the final minutes,” Getzlaff said. “We didn’t panic. We made the right plays. We fouled who we wanted to foul when we wanted to foul them. Then, we did the right things on offense to put us in position to get that last shot.”

On the other side, Friday’s defeat is the fourth in a row for East Ridge. Evidence of the rough patch was all over the face of Raptors coach Josh Peltier, who struggled when asked about how his team was handling the loss.

“This one hurts,” Peltier said. “There were a lot of guys who were pretty upset after this one. We’re putting ourselves in our positions to win. We just have to learn to execute down the stretch.”

Besides losing four straight, they’ve all been losses by less than 10 points — three of which were decided by three points or less, including the two blemishes to their crosstown rival.

“Our challenge has been consistency,” Pelter said.”We see the good, but we also see the work we need to do.” 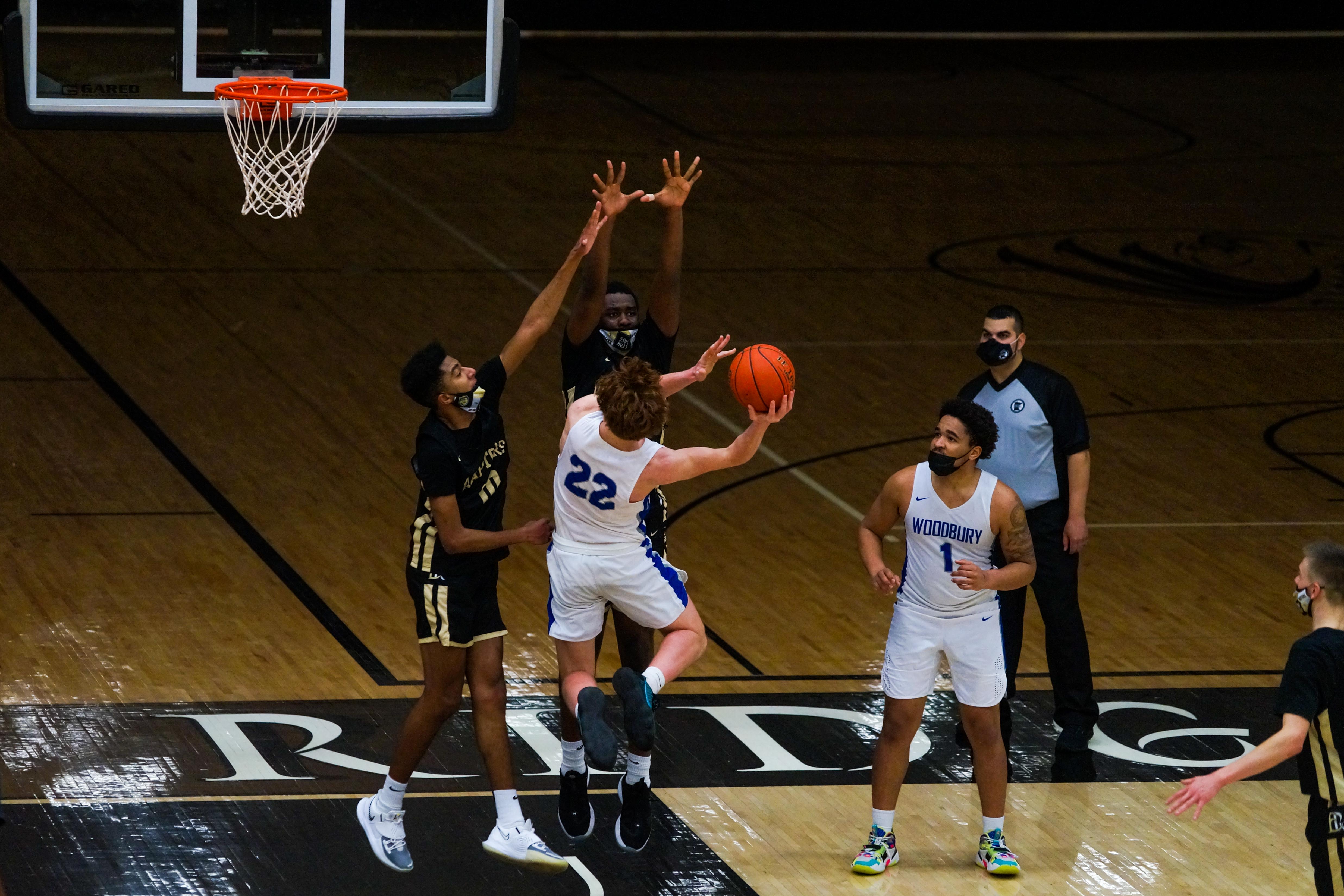 Woodbury senior guard Mac Lockner (22) with a tough shot over a pair of Raptor defenders on Feb 19. Lockner had a game-high 16 points in the Royals' 50-47 victory. Photo by Korey McDermott, SportsEngine

Woodbury took an eight-point lead into halftime at East Ridge on Friday, and just like in the teams’ first meeting on Feb. 9, the Royals eked out a victory. This time, Woodbury held off a rally from the Raptors in the second half and got a three-pointer in the game’s waning seconds from senior guard Bradley Cimperman to win 50-47.

The Royals (8-3) took a 25-17 lead into halftime, despite not scoring for nearly seven minutes to open the game. Woodbury got the scoring going, thanks to senior guard Mac Lockner who was a key catalyst throughout the night with 16 points, including 11 in the first half.

Senior forward Donald West was the other Royal in double figures, tallying 14 points, including a pair of free throws late to help cement the Woodbury win.

The Raptors’ Kendall Blue had a double-double with 13 points and 14 rebounds, and fellow senior Ben North tallied 10 points. Senior post Rodrick Payne also was big on the glass with a nine-point, 15-rebound performance.

But despite the effort and rally from East Ridge (5-5) in the second half, which included the Raptors erasing their halftime deficit to take the lead, it wasn’t enough to end its losing streak as Cimperman made just his second basket of the game to put Woodbury ahead for good, giving the Royals their seventh consecutive win. 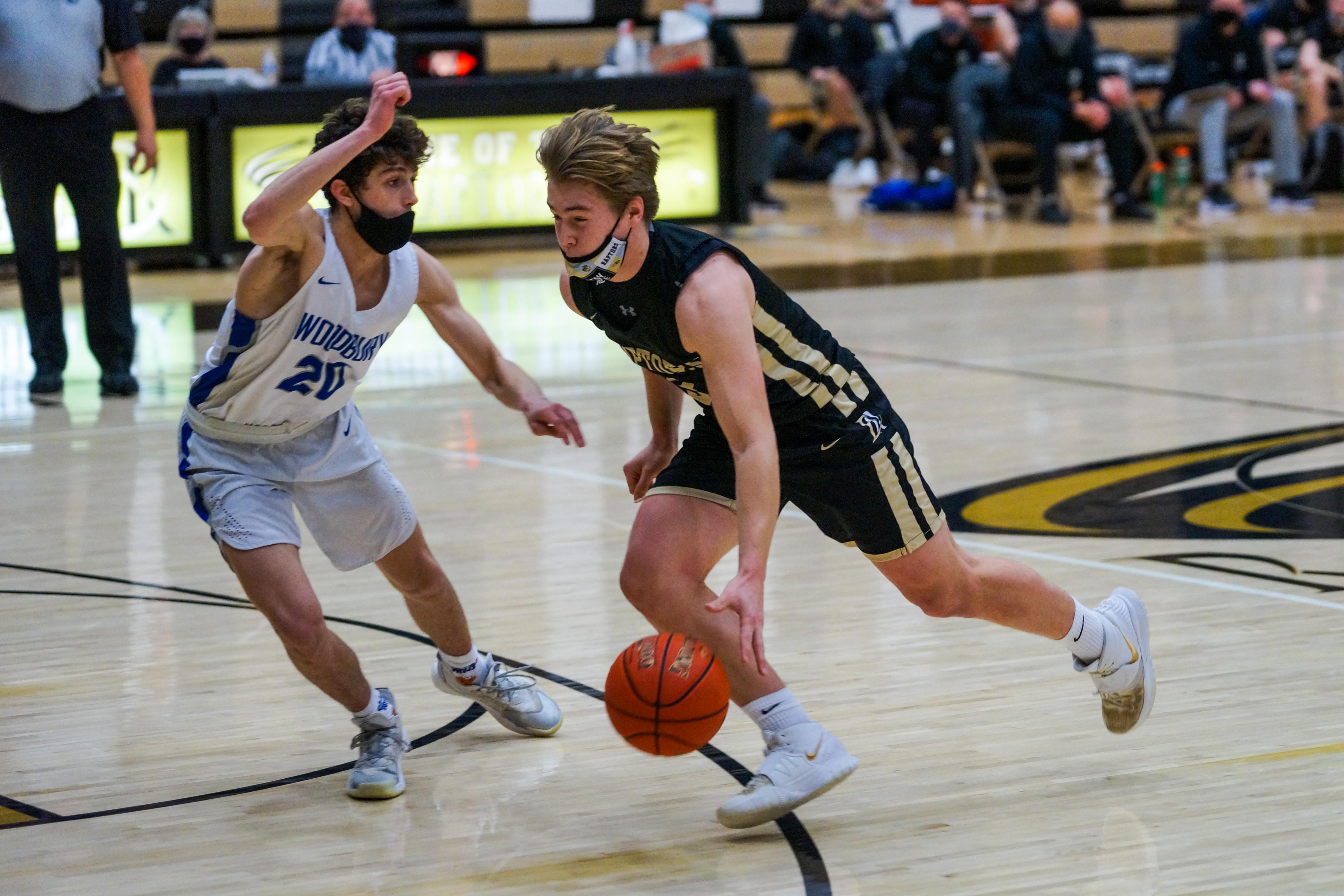