The Greyhounds got a game-high 22 points from Noah Paulson and teammate Mattie Thompson chipped in 21 points. 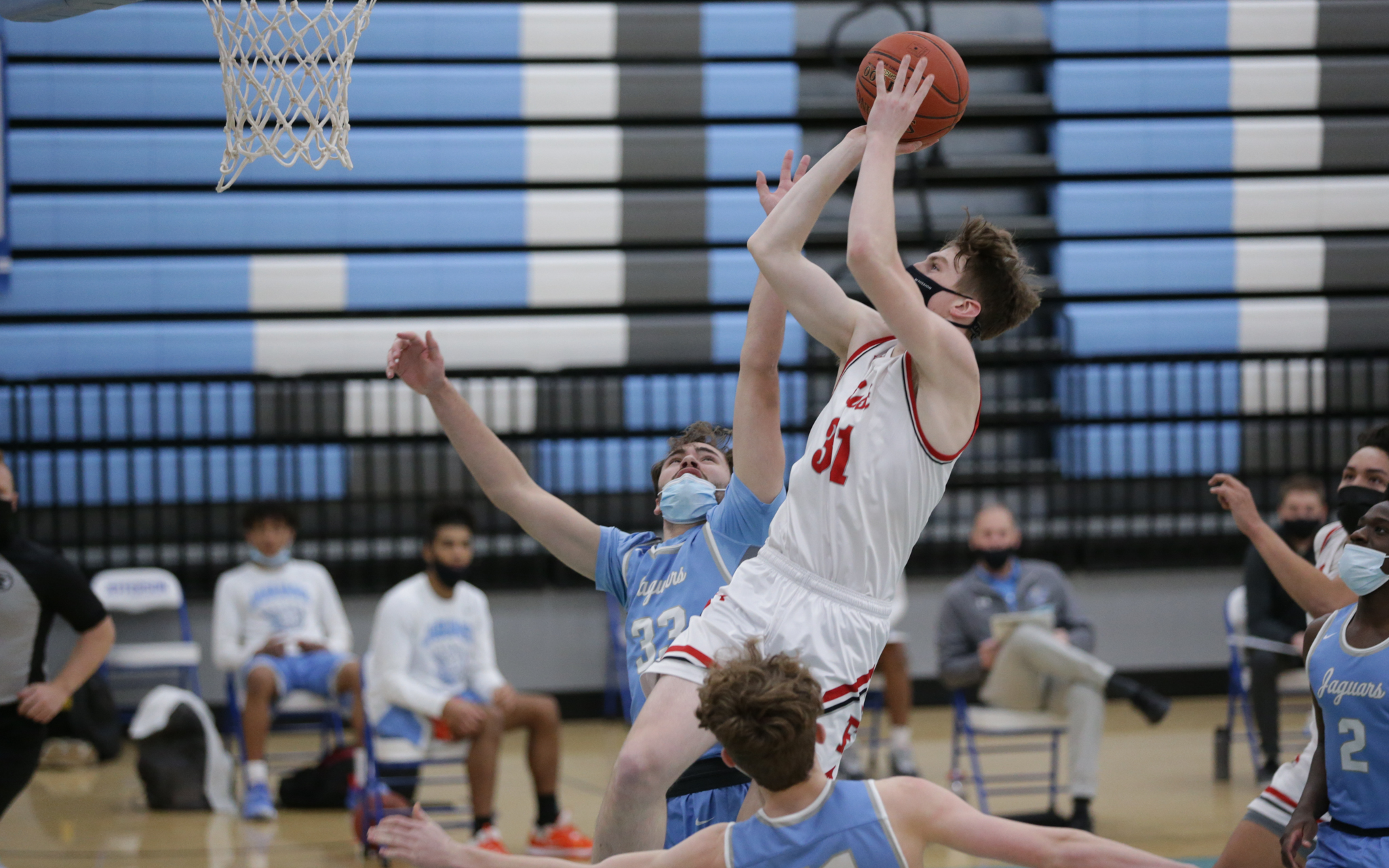 Duluth East's Mattie Thompson (31) puts up a short jump shot against Bloomington Jefferson. Thompson had 21 points in the Greyhounds’ 63-54 victory over the Jaguars in Bloomington. Photo by Jeff Lawler, SportsEngine

Teams may lean on every game in a season to figure out ways to generate maximum production from a roster, so it’s no surprise Duluth East has cherished every game played in a pandemic-shortened season.

As a team from outstate Minnesota that’s playing without a conference, a typical Greyhounds’ basketball season means taking lengthy trips, sometimes going hours south to play teams from the Twin Cities. The Greyhounds, however, haven’t been able to make the journey south as often as in past winters, giving Thursday’s matchup at Bloomington Jefferson added significance.

“Every time we come down here and play Jefferson, what we like about them is they force you to be pretty solid,” said Greyhounds coach Rhett McDonald. “You have to be efficient.”

And a challenge is what Duluth East got, especially early on as the Greyhounds found themselves trailing Jefferson (7-4) by four points at halftime before they found their footing in the second half to defeat the Jaguars 63-54.

The Greyhounds, ranked No. 9 in Class 4A by Minnesota Basketball News, turned it on the second half quickly, breaking a 39-39 tie with less than 11 minutes left and never looking back — despite missing a few free throws than they would have liked in the waning minutes.

“The ending kind of skewed that, but we played a great second half that first 11 minutes,” said Duluth East senior Noah Paulson, who had a game-high 22 points.

The team’s schedule this winter has produced a few twists through the first 11 games. The Greyhounds’ 2019-2020 season included 24 wins before a 81-73 loss to Cambridge-Isanti in the Class 4A, Section 7 championship game — led by coach McDonald’s father, Mike McDonald. But Duluth East (9-2) flipped the script in the teams’ first meeting this winter, winning 67-28 on Feb. 12.

Led by Minnesota Duluth commits Paulson and Mattie Thompson, who scored 21 points Thursday, the Greyhounds were able to extend their winning streak to seven games with their defeat of Jefferson.

Duluth East’s two losses this season both came against what likely is the top team in the state: No. 1-3A Minnehaha Academy. With two teams looking for as many games as possible, why not schedule twice?

“We can use the experience from that for the rest of the season, so it was great to play the best,” Paulson said of playing the Redhawks. “You have to play the best to be the best.”

Led by two talented seniors, Duluth East aims to get back to a section championship game for another chance to earn a spot in the state tournament. But the Greyhounds still have some work to do to hone the lineup, including replacing point guard Will Van Scoy who is out for the season with an ACL injury.

“We’ve just got to find ways to just keep getting better like every other team,” McDonald said.

The Greyhounds know they’re in for a challenge but they have a fair amount of experience to help. But what is most important, especially during a pandemic, is avoiding illness.

“We need to be healthy at the end of the year,” McDonald said. “We can’t be in a situation where we maybe have unfortunate COVID exposures, or have ourselves get sick. So if we get to a spot where we are healthy and playing good basketball, I’m going to consider myself fortunate.” 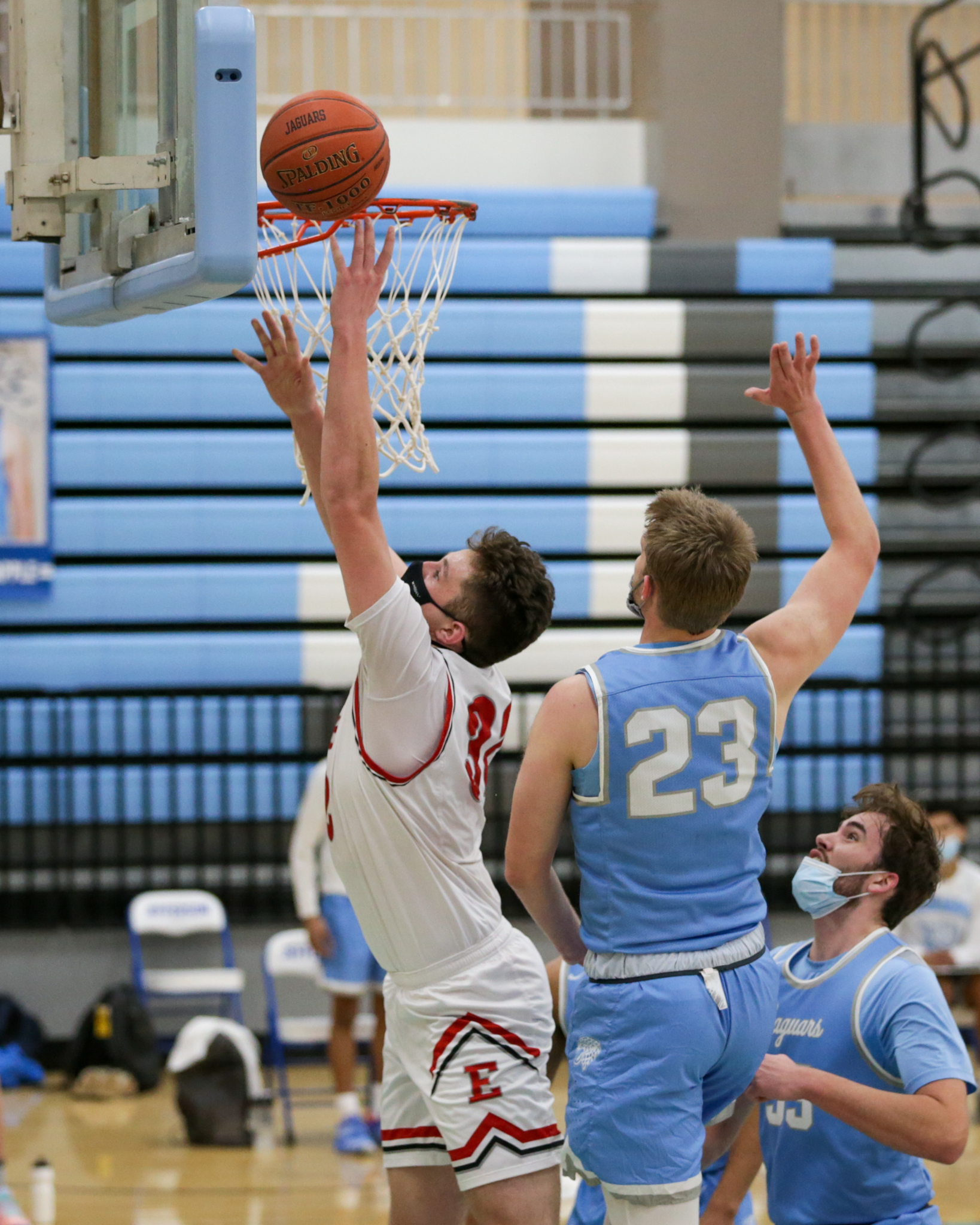 Duluth East's Noah Paulson (32) goes up for two of his 16 first-half points against Bloomington Jefferson Thursday night. Paulson finished with 22 points in the Greyhounds’ 63-54 victory over the Jaguars. Photo by Jeff Lawler, SportsEngine

The Jaguars (7-4) headed into halftime with a 29-25 lead, but that quickly changed in the second half. Trailing by as many as seven points early in the latter half, the Greyhounds (9-2) tied the game 39-39 with less than 11 minutes remaining and didn’t look back from there.

Paulson, a Minnesota Duluth commit, scored a game-high 22 points to lead the Greyhounds, who are ranked No. 9 in Class 4A by Minnesota Basketball News. Thompson, another Bulldogs commit, finished with 21 points.

With the victory, Duluth East has won seven consecutive games. 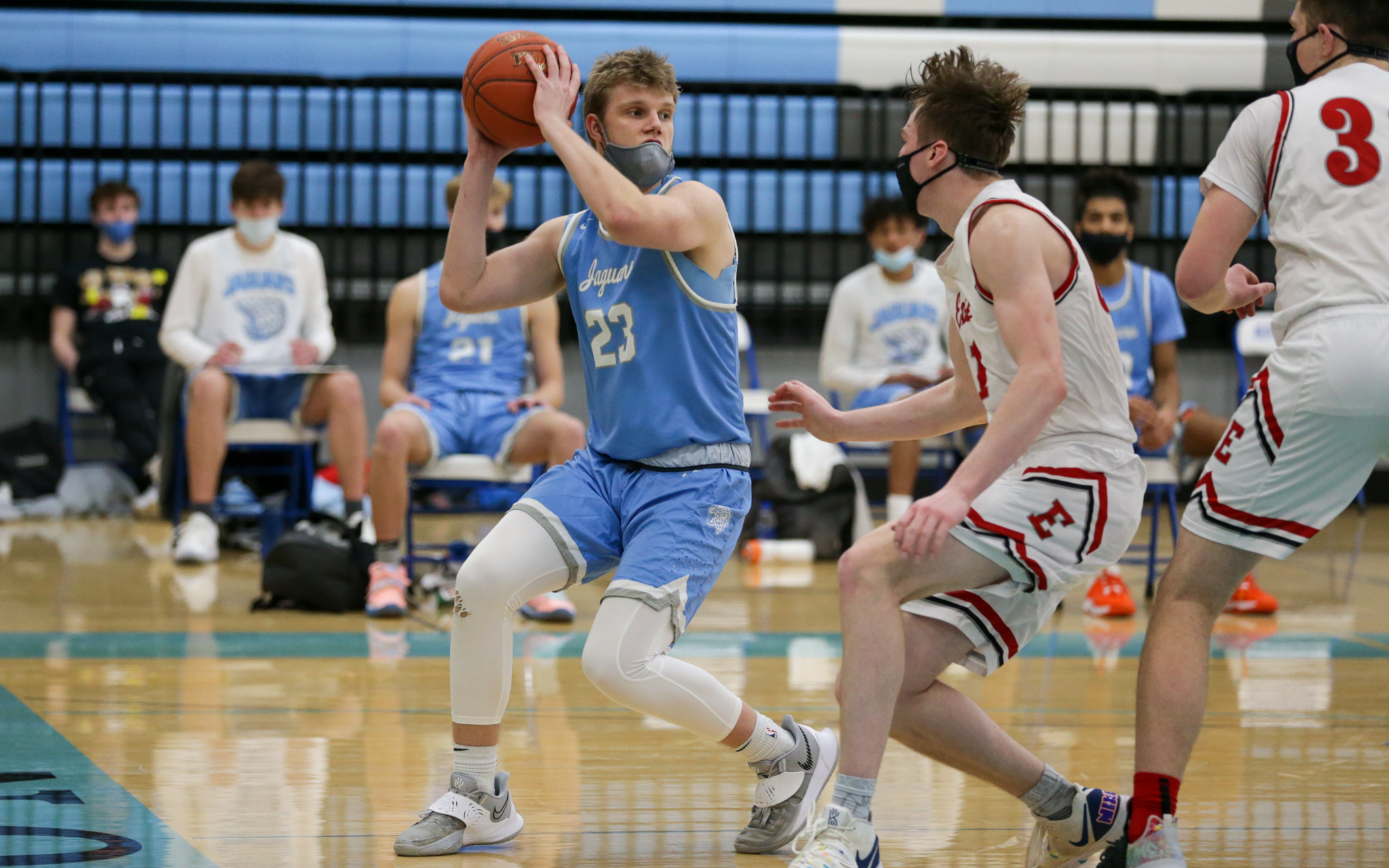 Bloomington Jefferson's Sam Wanzek (23) looks for room under the basket against Duluth East Thursday night. Wanzek had 15 points in the Jaguars’ 63-54 loss to the visiting Greyhounds. Photo by Jeff Lawler, SportsEngine