Camden Heide scored 24 points — one of which was his career 1,000th point — in the Trojans' triumph over the Royals. 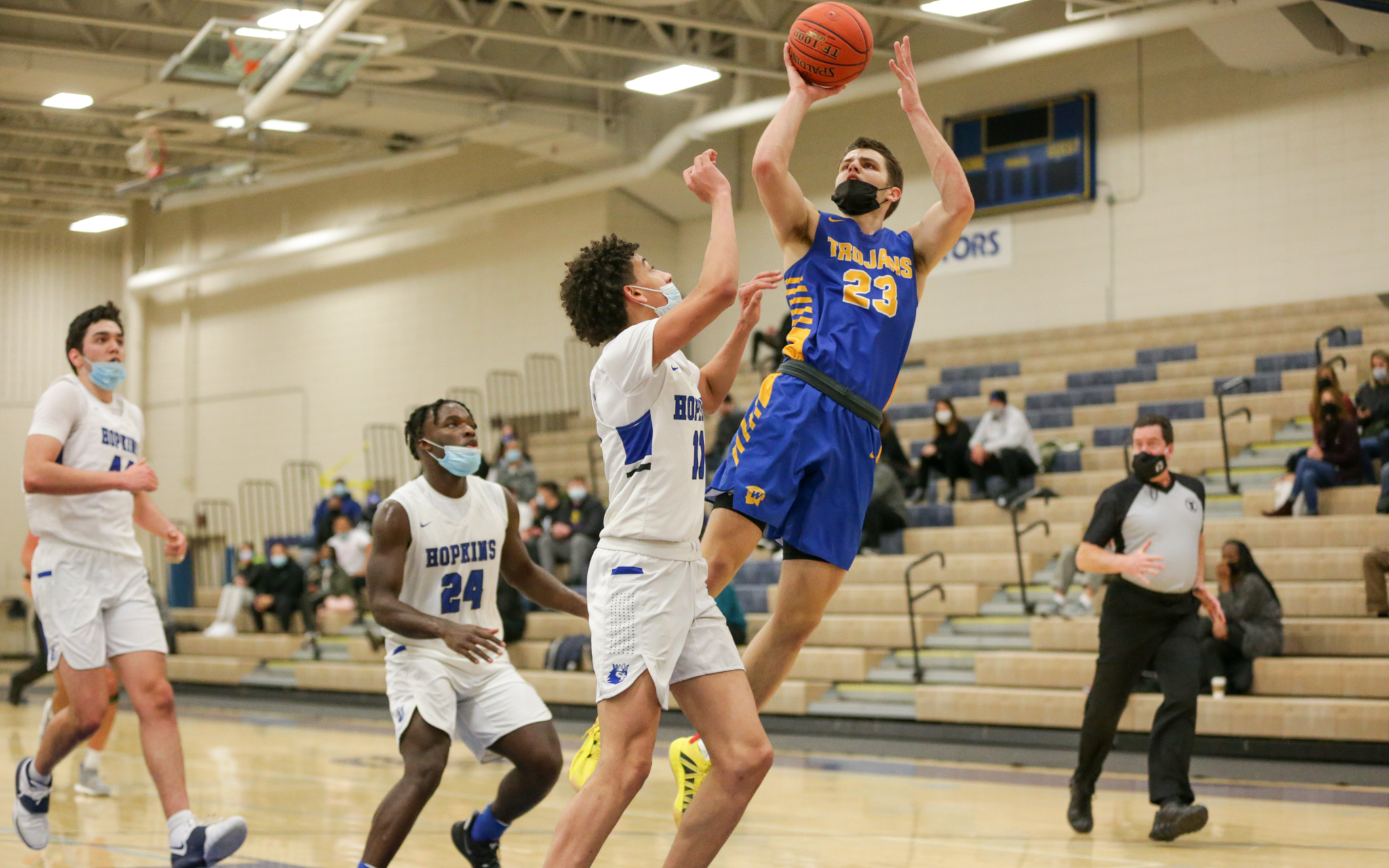 Wayzata's Camden Heide (23) puts up a jump shot against Hopkins Friday night. Heide had a game-high 24 points in the Trojans’ 68-60 victory over the Royals in Wayzata. Photo by Jeff Lawler, SportsEngine

Energy and effort on both sides of the ball made all the difference for Wayzata as it captured a 68-60 Lake Conference triumph over rival Hopkins 68-60 Friday night at Wayzata High School.

That energy and effort was on full display from the get-go, and it helped Wayzata, ranked No. 2 in Class 4A by Minnesota Basketball News, shake off an early seven-point deficit and take a 36-33 lead into halftime.

“They’re a great transition team,” Wayzata’s Drew Berkland said of No. 3-4A Hopkins. “We have to make them run plays in the half court and I thought we did a good job of that.”

Defensively, the Trojans (7-2) had to deal with 6-foot-7 forward Elvis Nnaji, who started 4-for-4 from the floor and had eight points early for Hopkins (7-2).

“We wanted to make sure he didn’t catch it deep in the post,” Camden Heide said. “He scored early, but then we were able to handle him a little bit better.”

The Trojans did just that. Nnaji scored just five more points while Wayzata extended its lead from halftime to take a 56-44 advantage with 8 minutes, 29 seconds remaining in the second half.

However, with help from Jaelen Treml who scored a team-high 17 points, Hopkins cut into that deficit to help the Royals trail just 56-52 with just over six minutes left.

That’s when 6-foot-6 Heide came in, drilling a string of buckets which included his third three-pointer of the game to help the Trojans build a 68-57 lead with just under two minutes to go.

“I’ve been playing with that kid [Heide] since fourth grade,” said Berkland, who dropped 14 points for the Trojans. “He’s a dynamic scorer, player, able to stretch the floor. He’s a luxury to have on the offensive and defensive end of the ball.

Heide’s game-high 24 points not only helped Wayzata secure the win, but in doing so he passed the career 1,000-point threshold. He said he’d only just heard how close he was to the milestone from his teammates during the game.

“When I scored four points, they’re like ‘yeah I only think you’re two away,’ and of course I miss a couple floaters that went in and out,” Heide said. “They jinxed me.”

Heide’s play on both ends of the court helped his team avenge an 87-80 loss to Hopkins back on Jan. 19, handing the Royals their second loss this season.

“I’m really proud of the way he played at the end,” said Wayzata coach Bryan Schnettler of Heide. “That was a huge step for him with his confidence and his ability to be a closer for us.”

Heide got help from several teammates Friday. Berkland made four three-pointers as part of his offensive contribution, while Eddy Beeninga followed with 13 points and Kody Williams added 10 points.

“We came out with a chip on our shoulder,” Heide said, adding he believes the work put in during practice helped this team prepare for this game.

“When we go hard in practice and have guys help each other prepare, and when we can execute our game plan from practice we have a higher chance of winning,” Heide said.

It’s a big win for this Trojan program that finished with an 11-17 record last year.

“It was a huge growing year for us,” Schnettler said of last year. “To be honest, the later start [this year] I think helped us. The biggest difference I see is they’re mentally tougher.” 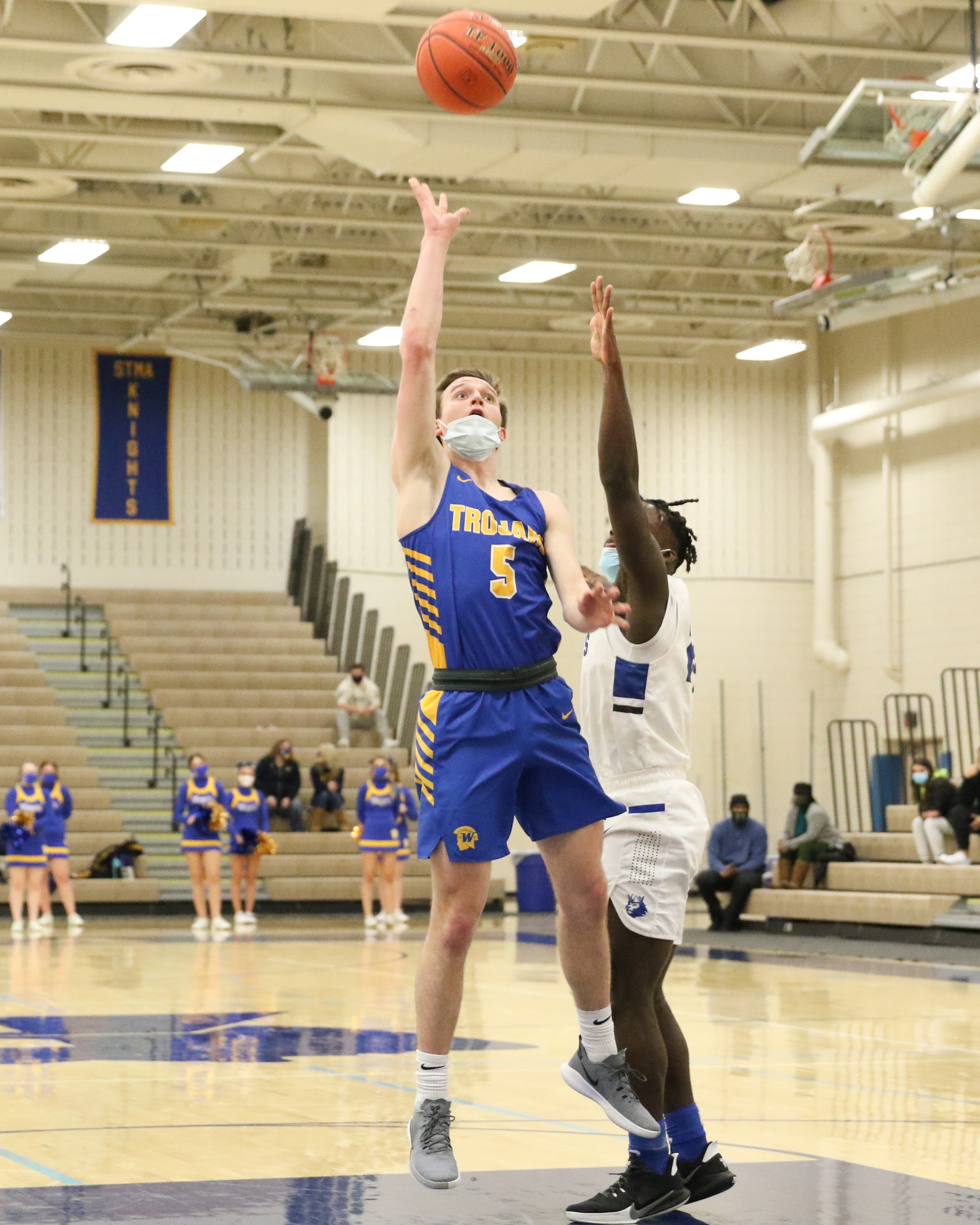 Wayzata's Eddie Beeninga (5) watches his one-handed put back against Hopkins Friday night. Beeninga finished with 13 points in the Trojans’ 68-60 Lake Conference victory over the Royals in Wayzata. Photo by Jeff Lawler, SportsEngine

The home team shook off a slow start to secure a 36-33 lead going into halftime. The Trojans, ranked No. 2 in Class 4A by Minnesota Basketball News, built an 11-point advantage in the second half, fought off a comeback from No. 3-4A Hopkins and secured the win in the game’s final two minutes.

Heide, with his 24 points, passed the career 1,000-point milestone. He got help from Drew Berkland, who added 14 points and four three-pointers. Eddie Beeninga had 13 points and Kody Williams rounded out the scoring attack for Wayzata (7-2) with 10 points.

The Royals cut into the Trojans’ lead in the second half, and trailed by just four points with about six minutes remaining, but ultimately couldn’t get closer. 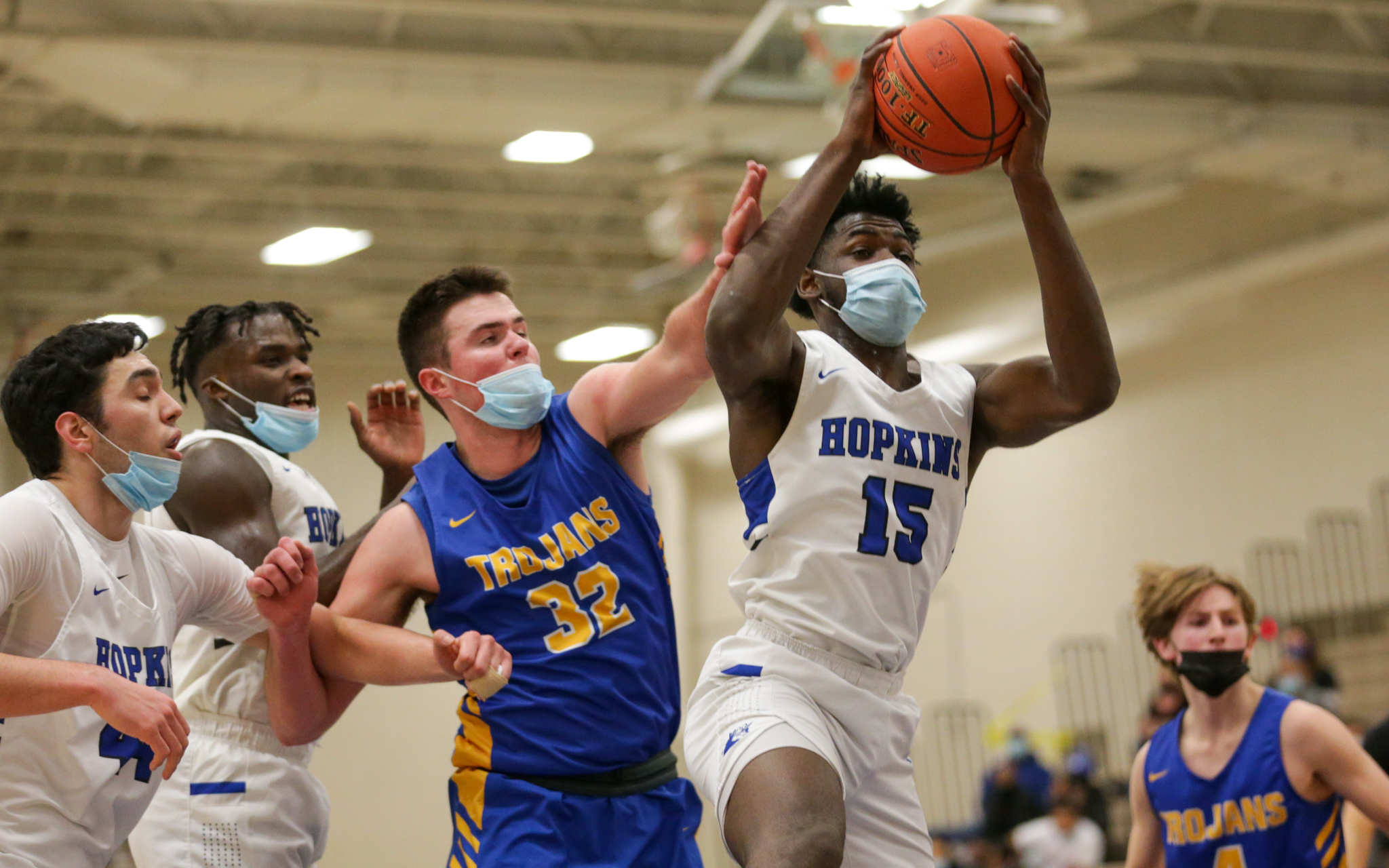 Hopkins' Elvis Nnaji (15) pulls down a rebound against Wayzata in Friday night’s Lake Conference game. Nnaji had 13 points in the Royals’ 68-60 loss to the Trojans. Photo by Jeff Lawler, SportsEngine