The longtime coach is set to become just the third coach in Minnesota boys' basketball history to reach the milestone, which could happen as early as Tuesday. 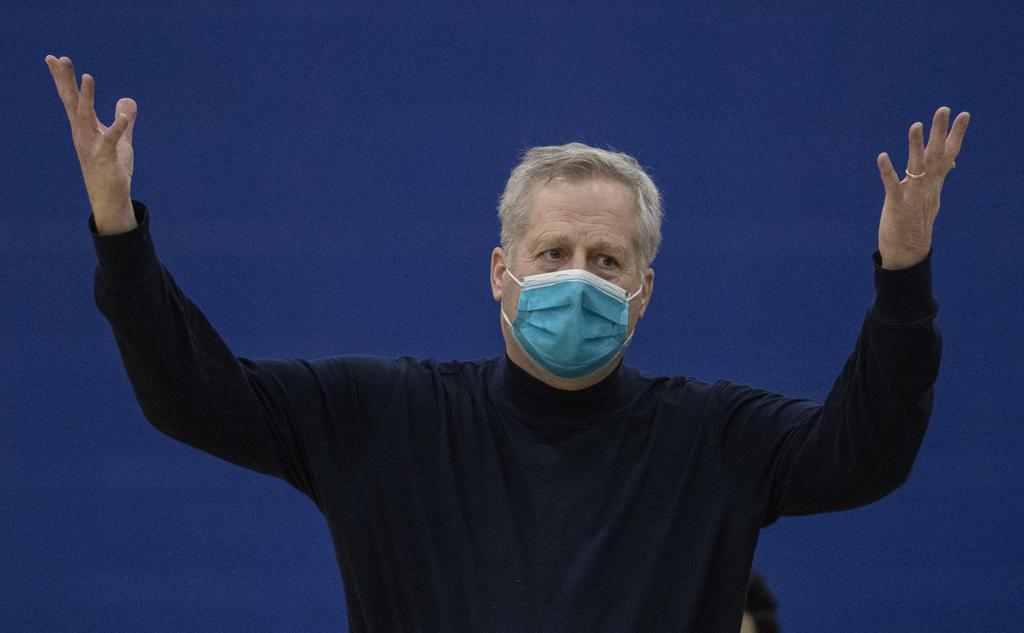 Ken Novak Jr. paces the sideline, cruising back and forth between half court and the baseline. He can be heard vehemently calling out instructions to his players or giving his opinion on a call to a nearby referee.

Novak has been step-by-step in maintaining his philosophy of being fundamentally sound for nearly 40 years as a high school basketball coach. One difference these days is that he will more frequently stand with his hands on his hips to catch his breath, or even take a seat in his usually unoccupied seat on the bench.

The Hopkins coach — third winningest boys’ coach in state history behind Bob McDonald of Chisholm and Bob Brink of Rocori — has 899 career victories and could reach No. 900 on Tuesday night at Chaska. McDonald, who died Oct. 14, had 1,012 victories while Brink concluded his career in 2012 with 936.

“To be truthful, I don’t think too much about it,” said the 64-year-old Novak, who has compiled a career record of 899-158 through seven years as head coach at Blaine and now in his 32nd season with the Royals. “It hasn’t even been on my radar. The only thing it probably means is I’m getting old.”

His sideline wardrobe hasn’t seen much alteration, either. He’s usually clad in casual dress pants, a mock turtleneck and loafers — just as he was taught growing up.

“Kenny likes to be comfy,” said Royce White, a former Hopkins standout who now serves as a volunteer assistant coach in the program. “His wardrobe is part of his phantom character. He is care free. It’s part of his whole approach.”

Missing from Novak’s current routine is his mentor and sideline sidekick, 91-year old father Ken Sr. He remains at home as a precaution with the COVID-19 pandemic.

“He made my life easy,” Novak said of his father, whose coaching career spanned nearly 70 years. “He is a special human being, and has always been a central part of our team. I wouldn’t be coaching if he wasn’t my assistant coach.”

Ken Sr. guided the Royals from 1957-70 and then at Lindbergh — when the district split into two schools — until 1982. He was later inducted into the Minnesota Basketball Coaches Association Hall of Fame with 459 career victories.

He joined his son as an assistant coach during Ken Jr.’s first year in Blaine during the 1982-83 season. His son was only 24 at the time.

“Kenny has a lot of love and respect for his father,” White said. “Everything he does has rubbed off from his father.”

This year’s squad, after starting play in mid-January instead of the first week of December, appears to be falling right in line with previous teams. The Royals are 4-1 and ranked No. 3 in Class 4A by Minnesota Basketball News.

“We’re an OK team, and getting better,” Novak said. “We’ve had to speed up the process since we started so much later.”

Novak doesn’t let himself get caught up in the wins and losses. For him, it’s about the process: Efficient players translate into an efficient team.“We are pretty detail-oriented and run a complex system,” Novak said. “Teaching is the fun point of it. I would be happy if we just practiced and didn’t play any games.”

Novak is seeking his 29th consecutive season with 20 or more victories. Two-thirds of the way into that streak, in 2010-11, he was named the ESPN RISE National Boys’ High School Basketball Coach of the Year. He could have a difficult time extending that streak with a shortened 18-game rigorous regular-season schedule.

He has coached teams in 17 state tournaments, tied for the most all-time. He would have coached in his 18th a year ago, but the pandemic halted the season after the Royals had secure a berth by winning the Section 6 championship. His eight state championships are the second most, behind Dave Thorson of DeLaSalle with nine, and include a three-peat from 2009-11.

“There aren’t many basketball minds like Kenny,” said White, who also played under Thorson. The power forward was a key figure on the Royals’ 31-0 squad during the 2008-09 season. “He has a deep obsession with the game, but in a very constructive way.”

“He’s undoubtedly the greatest high school coach in state history,” White said. “I really believe he could be a head coach at any level.”