Defending 4A champ Hopkins knocks off Cooper to return to state

The Hawks jumped out to an early lead but the Royals responded, staving off similar challenges later on en route to a 71-60 victory., 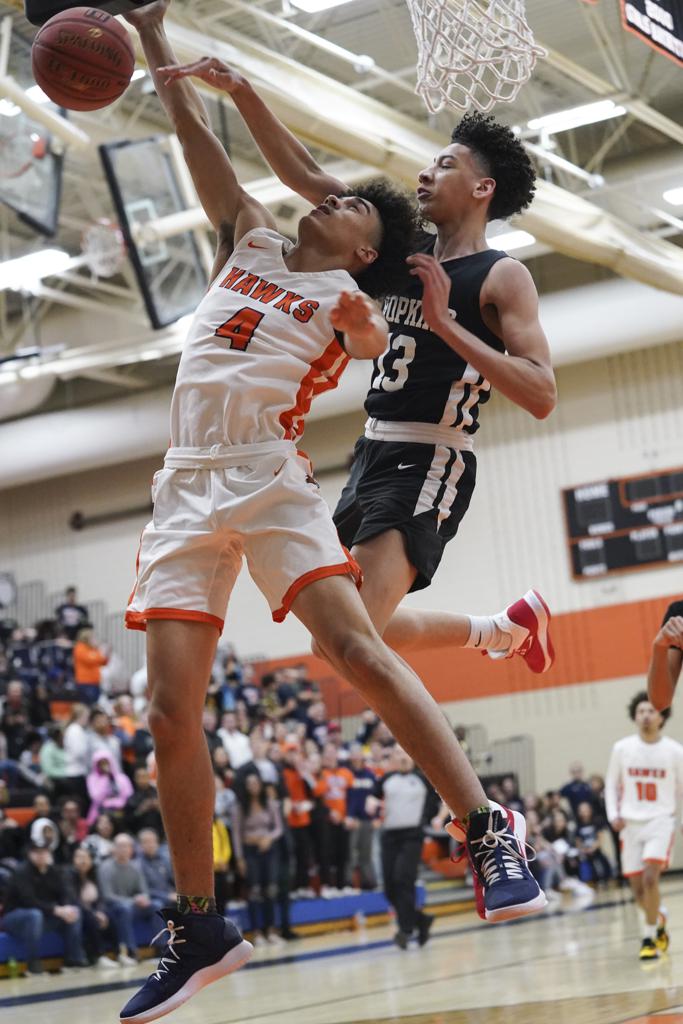 It paid off as the senior guard went 10-for-10 at the free-throw line in the Royals’ 71-60 victory over Cooper on Wednesday in the Class 4A, Section 6 title game in Osseo.

“It determines whether or not you lose a game,” said Walton, who had a team-high 16 points. “You’ve got to hit free throws.”

Second-seeded Cooper (19-6) was less successful, making 14 of 28 free throws, undermining its effort to unseat the defending state champions. The Hawks sported underdog warm-up shirts that stated, “Cooper versus everyone.”

“We’re confident. We could have done it,” said sophomore guard Davion Evans, who led the Hawks with 20 points and helped Cooper whittle double-digit Hopkins leads to a basket twice in the second half.

Said Walton, “We’ve just got to be patient with the ball. We were rushing.”

Cooper got within two, at 42-40 with less than 11 minutes left, before the Royals made an 11-2 run to seal the victory. That run included Xavier White’s first basket of the game for the Royals. A junior forward and younger brother of former NBA player Royce White, the younger White had four blocked shots.

"It was just being aggressive, going after the ball and sinking down on defense,” White said.

Hopkins senior guard Cornell Richardson scored 14 points, including a three-pointer and a basket on back-to-back possessions in the first half to give the Royals their first double-digit lead at 25-14.

Cooper started strong with a 7-0 run, with four of those points from Broderick Powell Jr., the son of Hawks coach Bo Powell. The junior guard finished with 11 points.

Hopkins responded with a 9-2 run to tie the game on junior forward Andre Gray’s rebound and put back. Gray had 11 points.

The Royals will embrace the underdog role in a state tournament field that has unbeaten Eden Prairie (28-0).

“We’re not going to be the ones expected to win state,” Walton said. “We’re just going to have to come in a play with a chip on our shoulder.”

Cooper jumped out to a 7-0 lead against defending state champion Hopkins, but the Royals responded and squelched the Hawks' upset bid with a 71-60 victory to win the Class 4A, Section 6 championship Wednesday at Osseo High School.

After Hawks junior guard Broderick Powell Jr. scored four of his team's seven points in the opening run, Hopkins stormed back with a 9-2 run, tying the game with junior forward Andre Gray’s rebound and put back. Gray had nine points.

The Royals (24-5) grabbed the lead on a Cornell Richardson layup and stayed ahead for most of the half. The senior guard also hit a three-pointer and a basket to help push the lead to 25-14.

Cooper (19-6) attacked the basket often, but Hopkins junior forward Xavier White tallied four blocks to keep the Hawks in check. White scored his first basket of the game late in the second half to give the Royals a 51-42 lead after the Hawks pulled within a basket. He added a dunk in the final minute to make it 67-55.

Powell finished with nine points for the Hawks.