Lamar Grayson scored a game-high 26 points for the Spartans, helping them to their first state tourney since 2006. 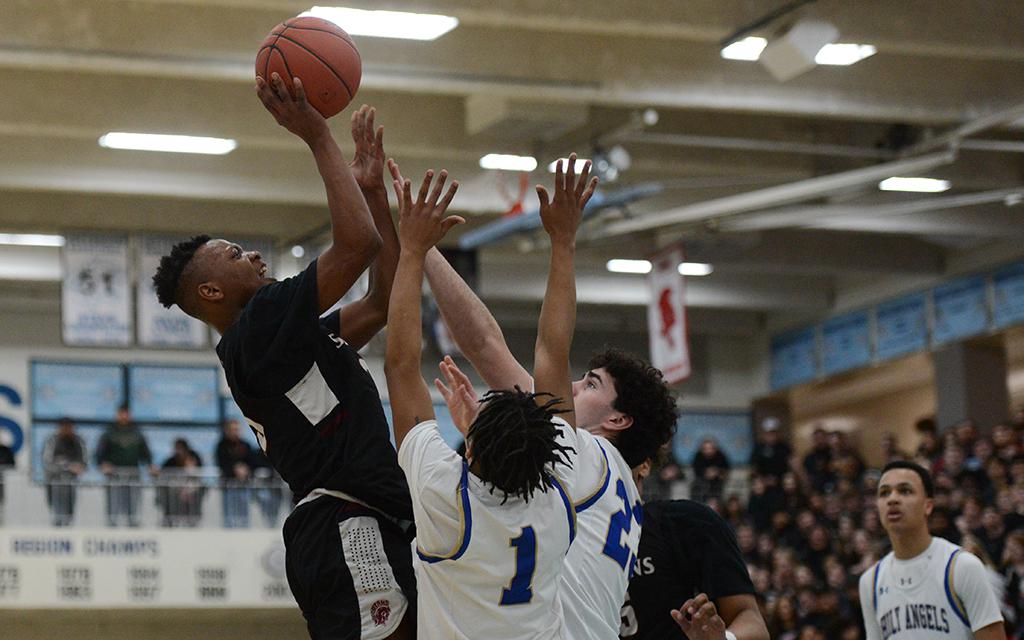 Richfield junior Lamar Grayson (left) leaps to take a shot against Holy Angels in the Class 3A, Section 3 championship at Bloomington Jefferson High School on Thursday night. Grayson had a game-high 26 points in the 67-53 win. Photo by Carter Jones, Sport

Walking off the floor after the team’s 21st and final loss of the season a year ago, Richfield guard Lamar Grayson wanted to shake that night’s feeling as quickly as possible.

It was the conclusion of the program’s sixth consecutive losing season.

A lot can change in a year, as top-seeded Richfield proved in its 67-53 defeat of No. 2 seed Holy Angels in Thursday’s Class 3A, Section 3 championship game at Bloomington Jefferson High School.

The win marks the Spartans’ first trip to the state tournament since 2006.

“It felt great. It felt great to get this ‘W’ and go to state,” said the hot-shooting Grayson, whose five three-pointers and 26 points were both game highs. “Last year we had a bitter taste in our mouth but this year we wanted to work harder.” 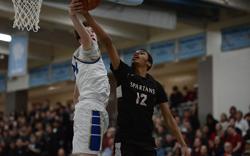 Richfield coach Omar McMillan saw resolve in his returners from last season that hadn’t been there in his 10 years helming the program.

“It’s amazing just to think about all the hard work we put in over the summer,” McMillan said. “Even last year, with a bad season, we had a bunch of good guys. That was the core that wanted to come back and get better.”

But before the Spartans (23-6) could advance, they had to overcome a tough Stars team that was up early. In front of a raucous crowd that filled the bleachers, spilling over into the mezzanine above, Holy Angels (19-10) was the team with the 25-21 advantage at intermission.

Holy Angels sophomore guard Emmett Johnson had been able to slash into the paint consistently to give his team a spark, putting in 12 of his team-high 18 points before the break.

Adjustments were needed at halftime to keep the Spartans’ turnaround season going for at least another game.

“I told them in the locker room what we had been practicing for all year,” McMillan said. “It wasn’t necessarily (getting to) state — it’s a certain team we want to be. That’s what we practiced for every game.”

Holy Angels quickly built a five-point advantage before the tide turned again. It became a game of runs and the Spartans looked like the type of team McMillan wanted to see coming out of the halftime break.

Richfield grabbed its first double-digit advantage with a 46-36 lead to force a Holy Angels timeout with nine minutes remaining.

Holy Angels forward Matt Banovetz dealt with foul trouble in the first half. He came on strong with 10 of his 12 points in the second half, including a pair of baskets in the paint that capped a 9-0 run.

The packed Richfield student section was temporarily hushed but it was the last big blow Holy Angels landed on its crosstown rival as Richfield rode a big second-half performance from Grayson to pull away for good. Four of Grayson’s five three-pointers came in the closing 18 minutes.

“Obviously it’s a big-time rivalry. This is a really good team,” said Holy Angels coach Andy Hannan of Richfield. “They played some good ball tonight and all year. Just a tough game; we had some opportunities but just couldn’t finish.”

The Spartans, who don’t feature a can’t-miss-college recruit on the roster, saw Grayson take the spotlight Thursday. He was showered in chants of "MVP" during the postgame award ceremony.

On other nights, senior Jeff Moore has thrived coming off the bench. Or sometimes it’s been Ryan Miles who stretches the opposing defense. Miles had 13 points, and Isaiah Casey Hammond and Jaden Wollmuth present matchup problems inside, combining for 16 points.

The Spartans are a deep team but their ties run deeper.

“We have core guys that actually like being around each other and like playing with one another," McMillan said. "It was easy to get them to sacrifice for one another. All the way from the starting five, to Jeff on the bench, and all the way down to the manager. You just saw it every day — someone doing something extra for someone else." 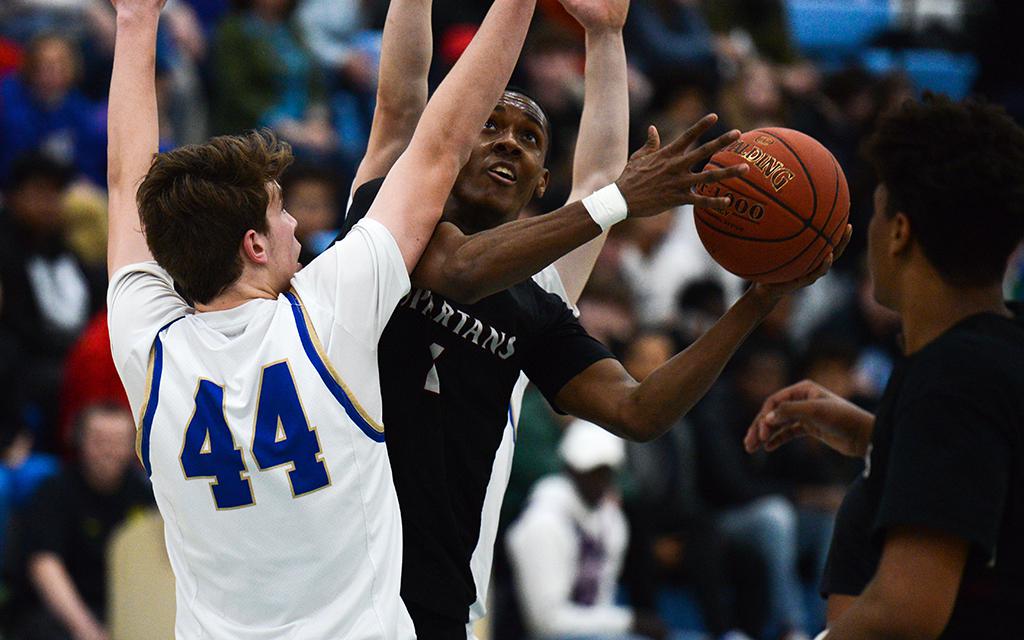 For the first time since 2006 Richfield is going to the state tournament, as the top-seeded Spartans defeated No. 2 seed Holy Angels 67-53 Thursday night at Bloomington Jefferson High School to win the Class 3A, Section 3 championship.

The Spartans’ typically balanced attack was led by the hot hand of junior guard Lamar Grayson. He hit four of his five three-pointers in the second half and scored a game-high 26 points. Ryan Miles chipped in with 13 points and Jaden Wollmuth had 10.

Sophomore guard Emmett Johnson was a big part of keeping the Stars in the game. His ability to muscle his way into the paint helped him score 12 of his team-high 18 points in the first half.

Holy Angels quickly built its biggest lead of five early in the second half but then Richfield got hot from deep. The Spartans surged back to lead by 10, but the Stars got a pair of buckets from Matt Banovetz, who finished with 12 points, and they closed the gap to 46-45 with under seven minutes to play.

Richfield ended the game on a 21-8 run to win its third of three meetings against Holy Angels this season. 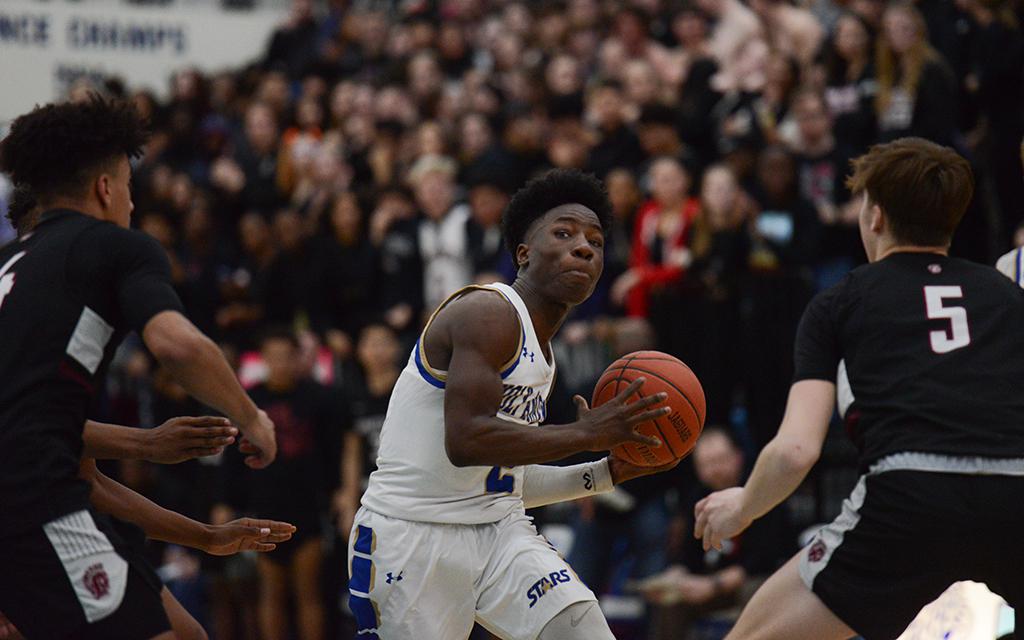 Holy Angels sophomore Emmett Johnson drives to the basket against Richfield in the Class 3A, Section 3 championship at Bloomington Jefferson High School on Thursday. Photo by Carter Jones, SportsEngine