Eddie Beeninga kickstarted the Trojans' offense with 22 points, helping his team gain some much-needed momentum as it turns its attention to the postseason. 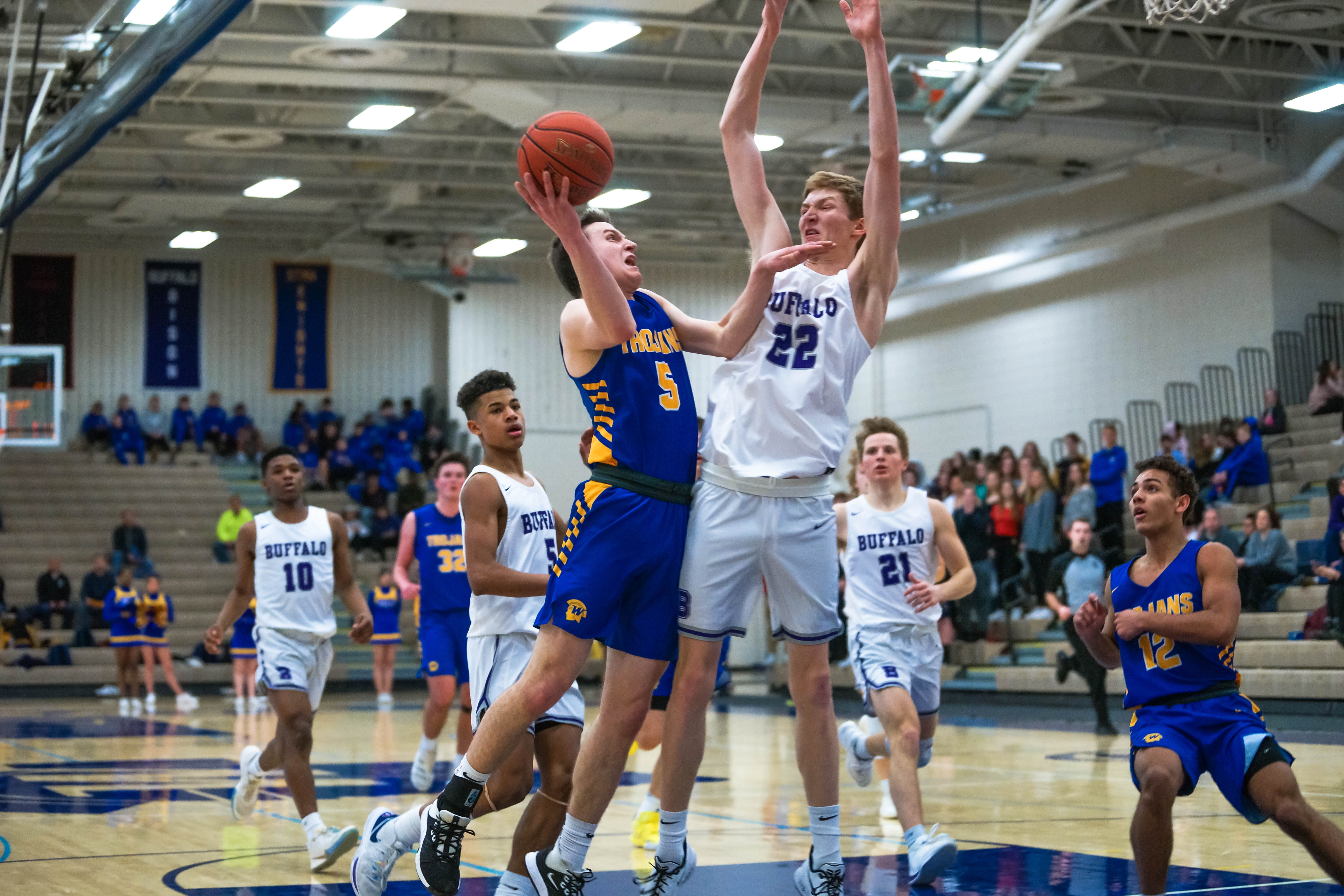 Wayzata's Eddie Beeninga (5) goes up for a layup against Buffalo's Matthew Willert during action Friday night. Beeninga had 22 points in the Trojans' victory. Photo by Korey McDermott, SportsEngine

Rematches between league foes in the regular season can be tense affairs.

Junior guard Eddie Beeninga made sure that Wayzata’s rematch against Lake Conference opponent Buffalo at Wayzata High School on Friday night was anything but as he led all scorers with 22 points in the Trojans’ 84-54 blowout victory.

A senior night pregame celebration kickstarted the festivities, but it wasn’t the seniors who powered Wayzata’s offense.

Beyond Beeninga’s 22 points, sophomores led the Trojans’ attack. Ryan Harvey scored 18 points, and was joined by Carter Bjerke and Drew Berkland who added 14 and 12 points, respectively.

“We had to focus on moving the ball a lot,” Beeninga said. “We worked on penetrating, and kicking [the ball out] and not forcing terrible shots.” 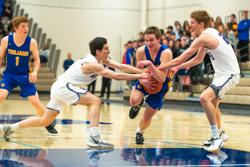 Boosting Wayzata’s game was its defense, as it had a much better second try against Buffalo’s standout senior, Matthew Willert who averages 25.6 points per game. Willert scored 29 points in the first game between the two teams, which Wayzata won 64-60 on Jan. 31.

“We did a better job on Willert than we did the first time around,” said Wayzata coach Bryan Schnettler. “Tonight might have been the best night we’ve had moving the ball and trusting each other.”

Willert was held to just 17 points Friday, and Buffalo’s offense just wasn’t able to maneuver through Wayzata’s tough interior defense to get points inside.

“He can flat out score and it’s hard to block it,” Schnettler said of Willert. “He still found a way to get some buckets and he can do that because he’s a great scorer.”

Early in the first half, both teams were physical inside and fought for rebounds and second-chance opportunities. But it was Wayzata (10-16, 7-5) that built a 17-12 lead with a little over eight and a half minutes remaining before the intermission.

“We came out slow in the first game when we were down 18-2,” Beeninga said. “This game we came out strong and finished strong.”

After a Buffalo (14-12, 5-7) timeout, Wayzata’s offense started firing on all cylinders, and with a buzzer-beating layup by Harvey, the Trojans had a 37-25 lead at halftime.

“We’ve had a tough time on senior night the last couple of years,” Schnettler said. “This year, guys were pumped up. When you make shots, everything gets a little easier, and we shot it well tonight.”

Beeninga bided his time in the first half, hitting two three-pointers and sinking a pair of free throws for eight points. His production picked up midway through the second half, as he hit three after three on the left wing, right in front of the Wayzata bench.

“We really moved the ball [well] in the second half,” Beeninga said. “That created opportunities for me to get open on the three-point line.”

Five threes from other Wayzata players gave the Trojans enough of a lead with three minutes to go that they were able to give one of their seniors a special moment to help cap senior night.

Senior guard Jacob Wildermuth, who broke his foot a couple of weeks ago, was put on the floor momentarily so that he could handle the ball before a timeout was called to remove him, giving the fans in attendance a chance to cheer on the senior captain.

“I’m good friends with all the seniors,” Beeninga said. “Even though I’m not a senior, it was fun to take shots for them.”

Despite a grueling schedule that left them under .500 for the season, and winners of just three of their last six games, the Trojans’ seven wins in Lake play sets them up with a good idea of what it will take to compete in the Class 4A, Section 6 playoffs — a grouping that includes league rival Hopkins, which is ranked No. 4 in Class 4A by Minnesota Basketball News.

“As we head into sections, we have to keep playing like we did tonight,” Schnettler said. “I was happy to see how we played like a group tonight. If we keep that up we’ll be right in it with anybody.” 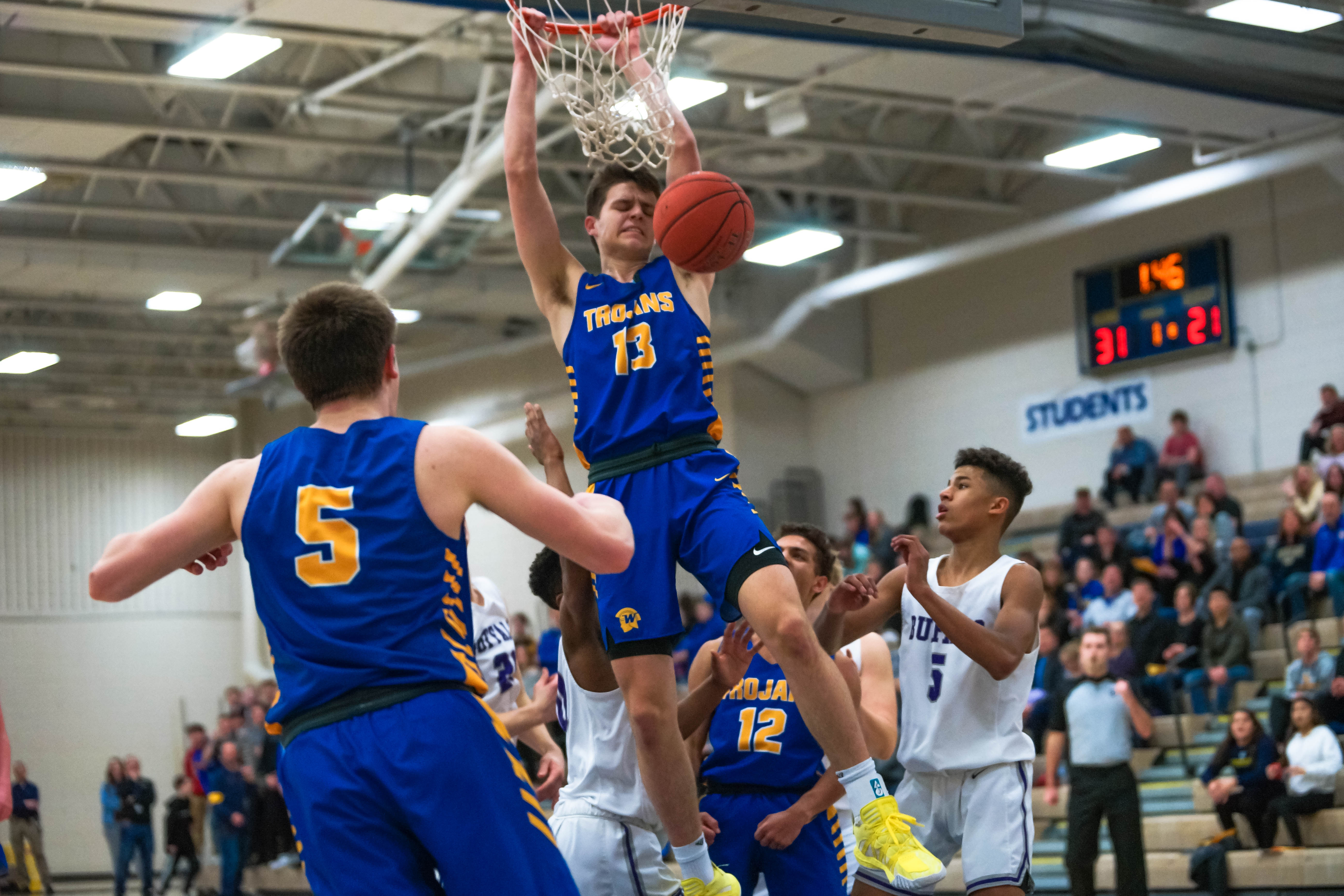 Wayzata's Camden Heide with a rebound dunk during the first half. The Trojans defeated Buffalo 84-54 on Friday night. Photo by Korey McDermott, SportsEngine

Wayzata used the emotions of senior night to blow past Lake Conference foe Buffalo 84-54 in its regular-season finale at Wayzata High School on Friday night, giving the Trojans a much-needed shot of adrenaline before next week’s section playoffs begin.

The Trojans’ defense made life difficult for the Bison (14-12, 5-7) and leading scorer Matthew Willert. The senior guard, who averages 25.6 points per game, was held to just 17 points.

Wayzata, which has lost three of its last six games, enters the postseason with a two-game winning streak. 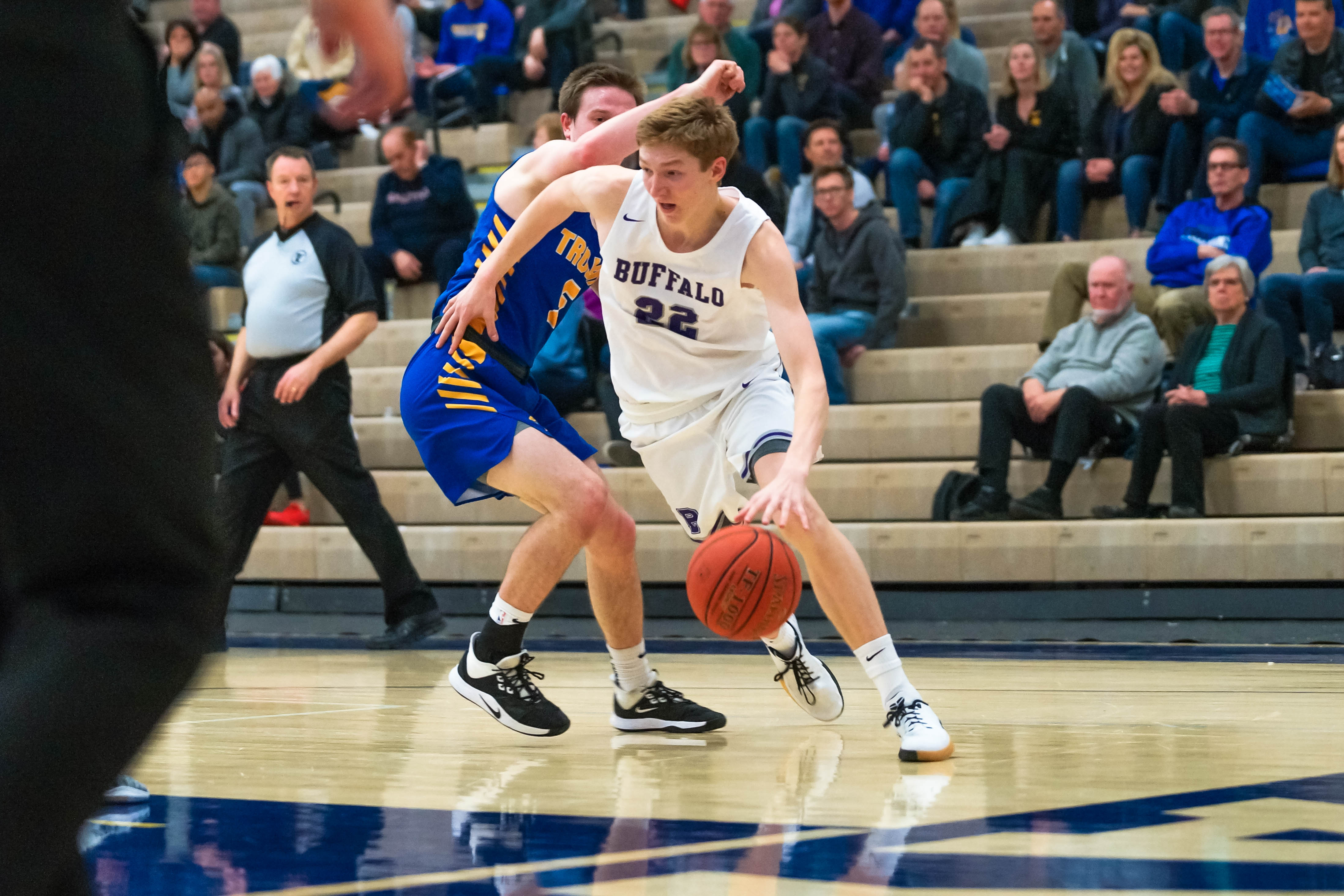 Buffalo senior Matthew Willert drives the baseline on a Wayzata defender on Feb 28. The Bison lost to the Trojans 84-54. Photo by Korey McDermott, SportsEngine