The Greyhounds' Mattie Thompson pulled down a rebound with less than a second left, then tossed up the game winning shot. 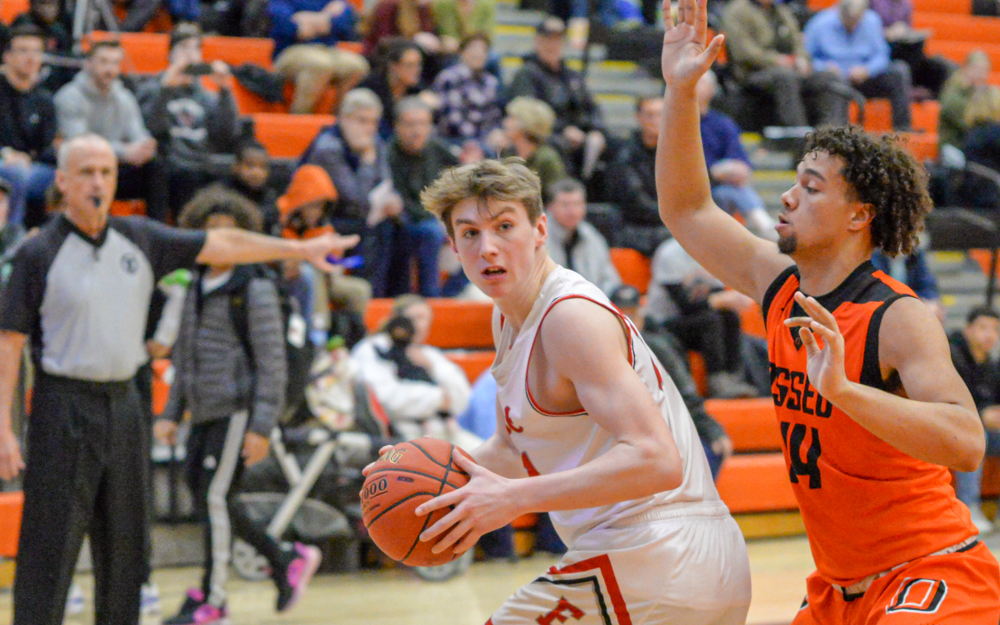 When you think of a buzzer-beater in basketball, what are the first images that pop into your head? Michael Jordan draining “The Shot” over Craig Ehlo? LeBron James hitting a running floater against the Raptors? Damian Lillard hitting a three from the logo over Paul George?

All of these are examples of incredible feats of athleticism that are extremely pleasing to the eye.

Not all buzzer-beaters are that aesthetically pleasing, but how a game-winning shot is made is far less important than simply making the shot.

That rang true for Mattie Thompson and Duluth East tonight, as he hit a shot right at the buzzer to defeat Osseo 54-52.

“In the final possession, I was expecting us to go to overtime, if you want my honesty,” Duluth East coach Rhett McDonald said about the final play, as the Greyhounds (20-4) got the ball with just over a minute left with the game tied 52-52. 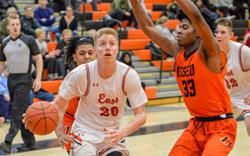 McDonald chose not to call a timeout and let his players run a common set, hoping to hold onto the ball and not let Osseo get a chance at a shot.

“There’s a set we commonly run, it was not ran well towards the end of the game, but we ran it, we made a couple passes, missed a shot and had guys crash,” he said.

The shot was put up by Noah Winesett, and it ended up falling short, but Thompson was in the right place at the right time to get the offensive rebound.

“I saw the ball go up, I knew I had to try to get it no matter what the outcome was, even if it went in, even if it didn’t. It landed in my hands, got kind of lucky with that one,” Thompson said.

After he got the rebound he had to force up a shot right away, as the clock had less than a second remaining.

“It happened so quick, I was just thinking about it in the locker room like I don’t even really remember what happened, but I threw it at the backboard and luckily it fell in,” Thompson said.

It was not the spectacle of a Jordan off-balanced 17-footer, but the result was exactly the same, and that’s what matters.

While Thompson is the team’s leading scorer, averaging 18.9 points per game, he finished with nine points tonight, a season-low for him. Noah Paulson took over as the go-to scorer, as they went to him early and often. He scored the Greyhounds’ first nine points (no one else scored for Duluth East in the game’s first nine minutes) and finished with a team-high 23, adding six rebounds and two blocks.

“What you see from him is a product of reps and time in the gym,” McDonald said about Paulson. “He’s not even close to how good he can be, he’s still not the most confident kid in the world. Once he gets to that point, honestly, I think he’s one of the best bigs in the state.”

While this loss is heartbreaking for the Orioles (8-15, 2-9), they competed the whole way, including coming back from an eight-point deficit with fewer than five minutes remaining. They were led by Josh Ola-Joseph and Tariq Martin, who each finished with a team-high 13 points. 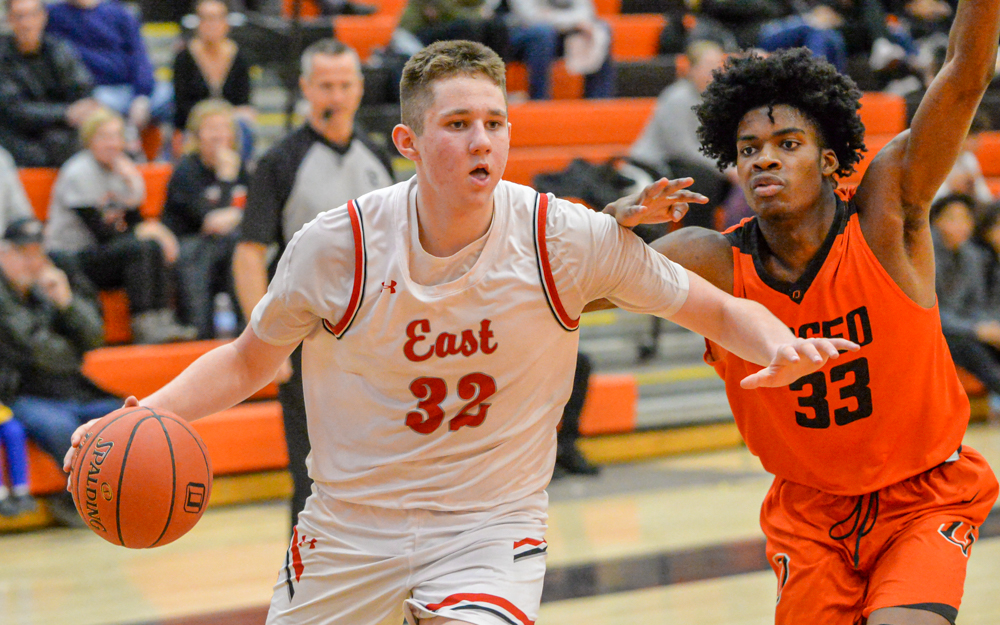 Duluth East’s Noah Paulson had a game and team high 23 points on the night, as the Greyhound’s went on to beat Osseo 54-52 Thursday night. Photo by Earl J. Ebensteiner, SportsEngine

Josh Ola-Joseph threw down a dunk to tie the game at 52-52 with a little over a minute remaining in regulation. Duluth East coach, Rhett McDonald, chose not to take a timeout and let his players decide the game.

Most of the possession was spent draining the clock, as the Osseo defenders kept pressure on whoever was handling the ball. The offense started to look for a shot with about 10 seconds left, and it ended with a three-point attempt from Noah Winesett, which fell short of the basket and went into a mob of bodies.

Mattie Thompson ended up with the ball, and with no time to react, he flung up a floater while falling away from the basket, appearing to get a shot off moments before the buzzer sounded. His flailing shot attempt found the bottom of the net, and the Greyhounds (20-4) escaped with a dramatic win.

Thompson finished the game with nine points and three rebounds. The Greyhounds were led by Noah Paulson, who led the team with 23 points, six rebounds and two blocks; all team-highs. 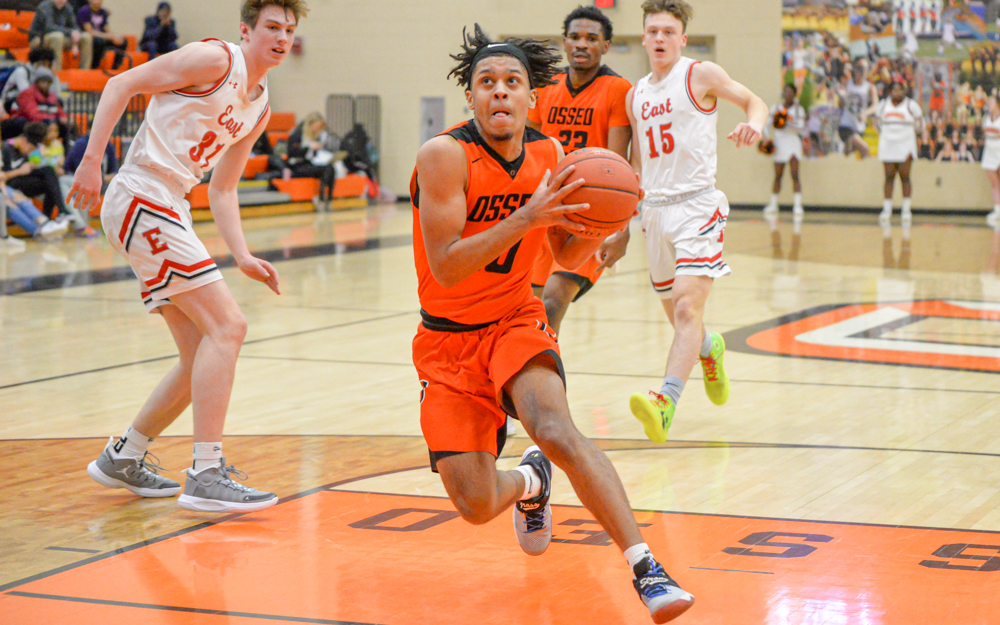 Osseo’s Tariq Henry had 13 points Thursday night in the Orioles 54-52 loss to the Greyhounds. Photo by Earl J. Ebensteiner, SportsEngine