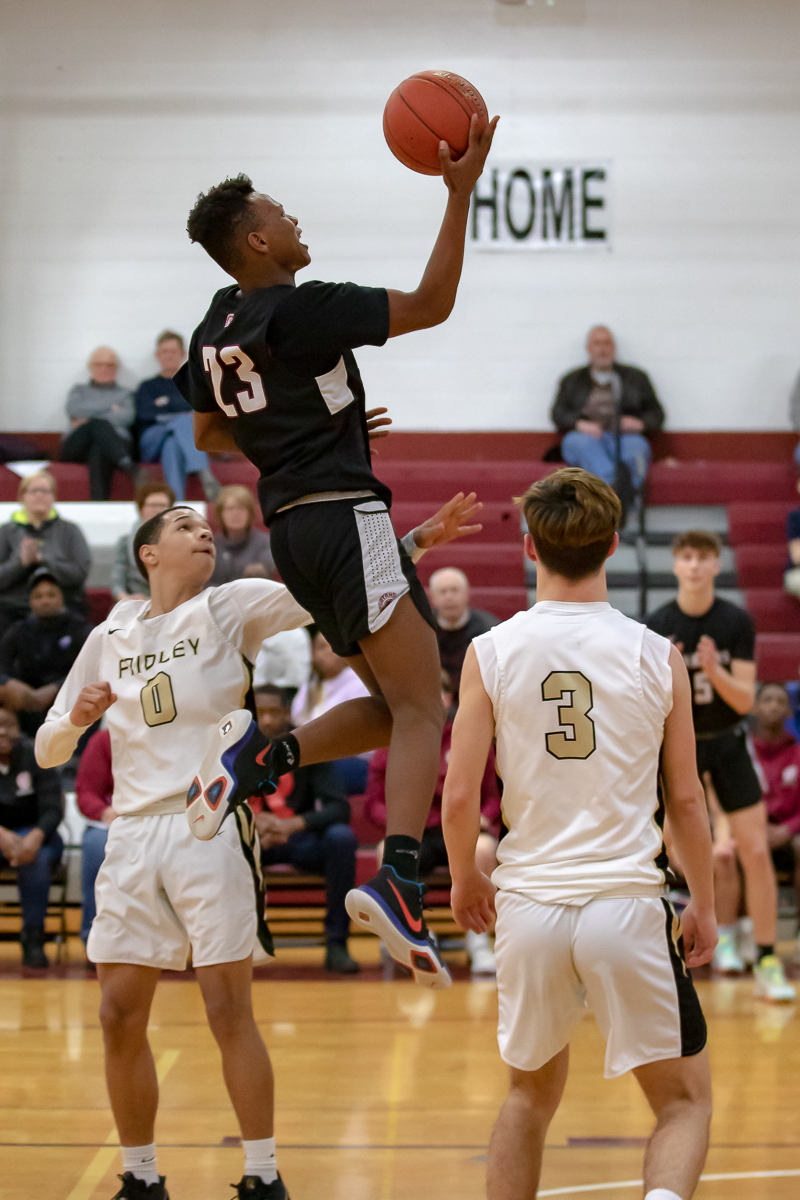 Richfield's Lamar Grayson (12) goes in for a layup over Fridley's Christian Crockett (0) and Micah Niewald (3). Grayson scored 29 points to lead the Spartans to an 89-82 win over the visiting Tigers Friday night. Photo by Gary Mukai, SportEngine

The Richfield boys’ basketball team sits at 15-4 following an 89-82 Tri-Metro Conference win over Fridley on Friday night. The Spartans, ranked No. 10 in Class 3A by Minnesota Basketball News, started the season 6-2, and had an eight-game win streak in January.

Considering Richfield went 6-21 last year and 1-26 two seasons ago, and the previous high-water marks for wins in a season this last decade were 16 (twice) and 17, the 2019-20 campaign is on track to be the best the program’s seen in a long, long time.

“We just want to be the best,” said junior Lamar Grayson. “So we just work every day, we compete and we just try our hardest in practice.” 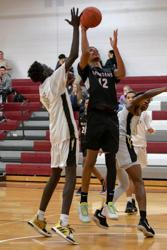 A commitment to the system and some unselfish play have the Spartans rolling to second place in the Tri-Metro behind reigning Class 3A state champion DeLaSalle.

There’s been growth for Richfield over the past two seasons, and it’s finally coming together for this group.

“We still are a pretty semi-young team,” said coach Omar McMillan. “We’ve had some guys for several years now, so I think they’re starting to jell a little more.”

Three players entered Friday averaging at least 14 points per game, in Grayson (20.9), Ryan Miles (17.2) and Mitchell January (14.6). Two more were just a shade under double-digits, with Jeff Moore at 9.7 points per game and Jaden Wollmuth at 9.4. Grayson had a monster second half attacking the basket against Fridley, to finish with a game-high 29 points. Isaiah Casey Hammond had 22 points, 19 coming in the first half as the Spartans bullied the Tigers in the paint while surging to a 45-31 halftime lead. Anyone in the rotation is capable of a big bucket or rebound for Richfield.

“We just all work together,” Grayson said. “We’ve all got a tight bond. We love each other.”

The season’s gone well enough for Richfield that McMillan’s old high school coach, James Gordon, made the trip up from Milwaukee to see them defeat Fridley. McMillan won a state title under Gordon at Milwaukee Washington in his playing days.

“It’s fantastic. I call him a lot and pick his brain, all different stuff,” McMillan said. “My assistant coach kind of knows him too, so we connect a lot and talk about old times. The one thing that’s good about it is, he never talks about basketball. He’ll switch whatever I’m asking him to a life situation, and then I’m like, ‘OK, I get where he’s going with this.’”

Seven regular-season games remain for the Spartans. They face the other two conference title contenders once each — third-place Holy Angels, which they beat 65-59 at home Jan. 24, and first-place DeLaSalle, which ended Richfield’s win streak earlier this week, a 78-57 game on Feb. 4.

In one sense, that DeLaSalle game showed Richfield that it hasn’t really proved anything yet this season.

“Teams like DeLaSalle, who are defending state champions, they humbled us,” McMillan said. “They let us know what it takes to get there. So we haven’t done anything yet.”

But in another sense, a lot has been done. The school is excited about basketball again. The Spartans have just one postseason win since 2011, but it feels like that will change if they keep playing the way they have. There’s been plenty to celebrate, but there’s still more the Spartans want.

“Not only are they improved as players, parent support improves. The city of Richfield is loving basketball that’s improved,” McMillan said. “I think we have accomplished a lot thus far in the season, and it’s not even over yet. So trying to bring it home.” 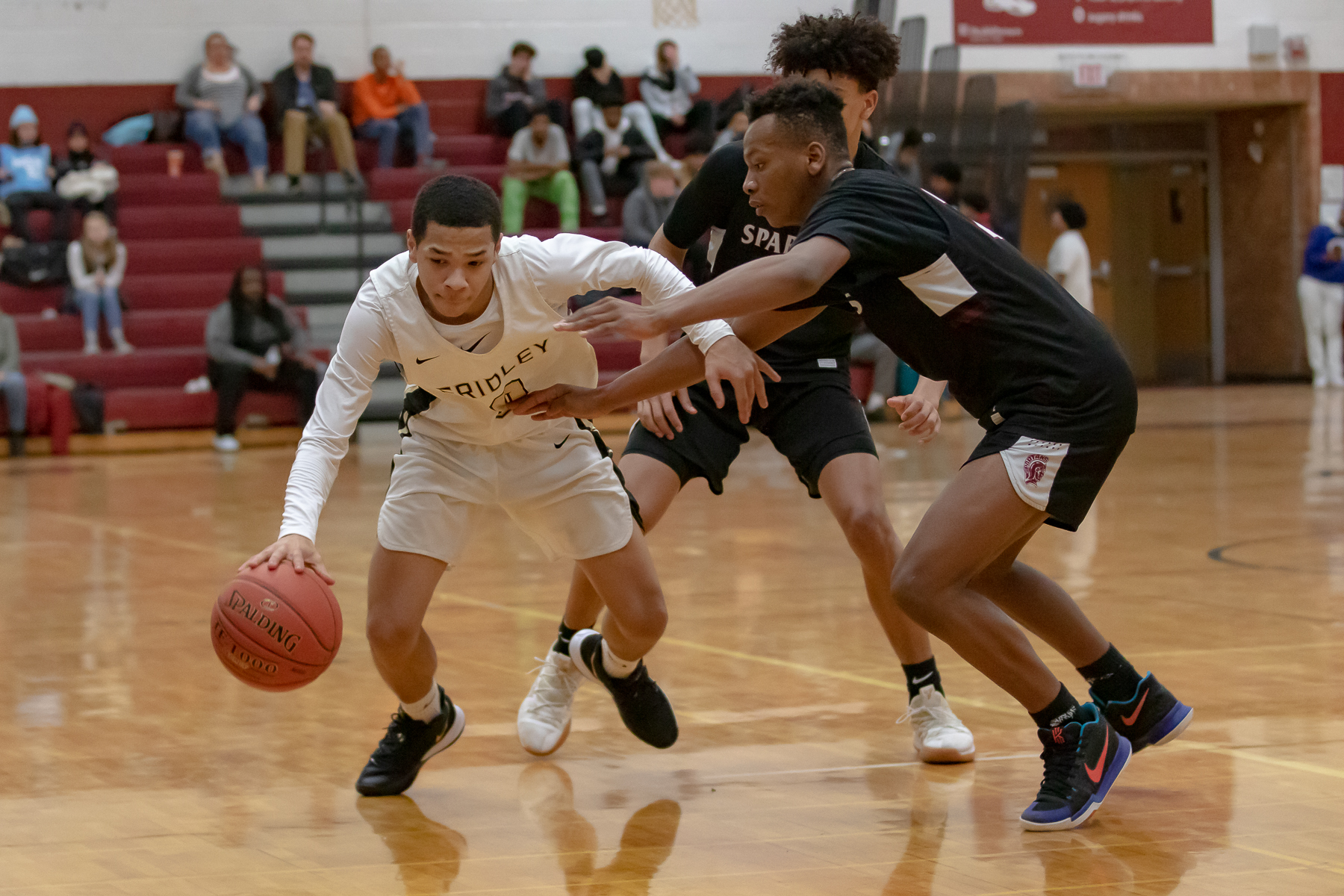 Lamar Grayson had 29 points to lead all scorers and help Richfield withstand a second-half push by Fridley.

Richfield (15-4, 6-1) led by 14 at halftime, but Fridley (9-10, 4-5) got back within 4 points before Grayson converted a basket and foul and a 3-pointer on back-to-back possessions to get the Spartans a cushion again.

Isaiah Casey Hammond added 22 points, 19 coming in the first half as Richfield, No. 10 in the Class 3A rankings by Minnesota Basketball News, won the battle inside. Ryan Miles added 11, Jaden Wollmuth had 11 and Mitchell January had nine.

Christian Crockett had 21 points to lead Fridley, and Yoal Ruei added 20 while Isaac Burns added 17 as Fridley mounted its comeback attempt. Charles Rice had a big second half with 11 points. 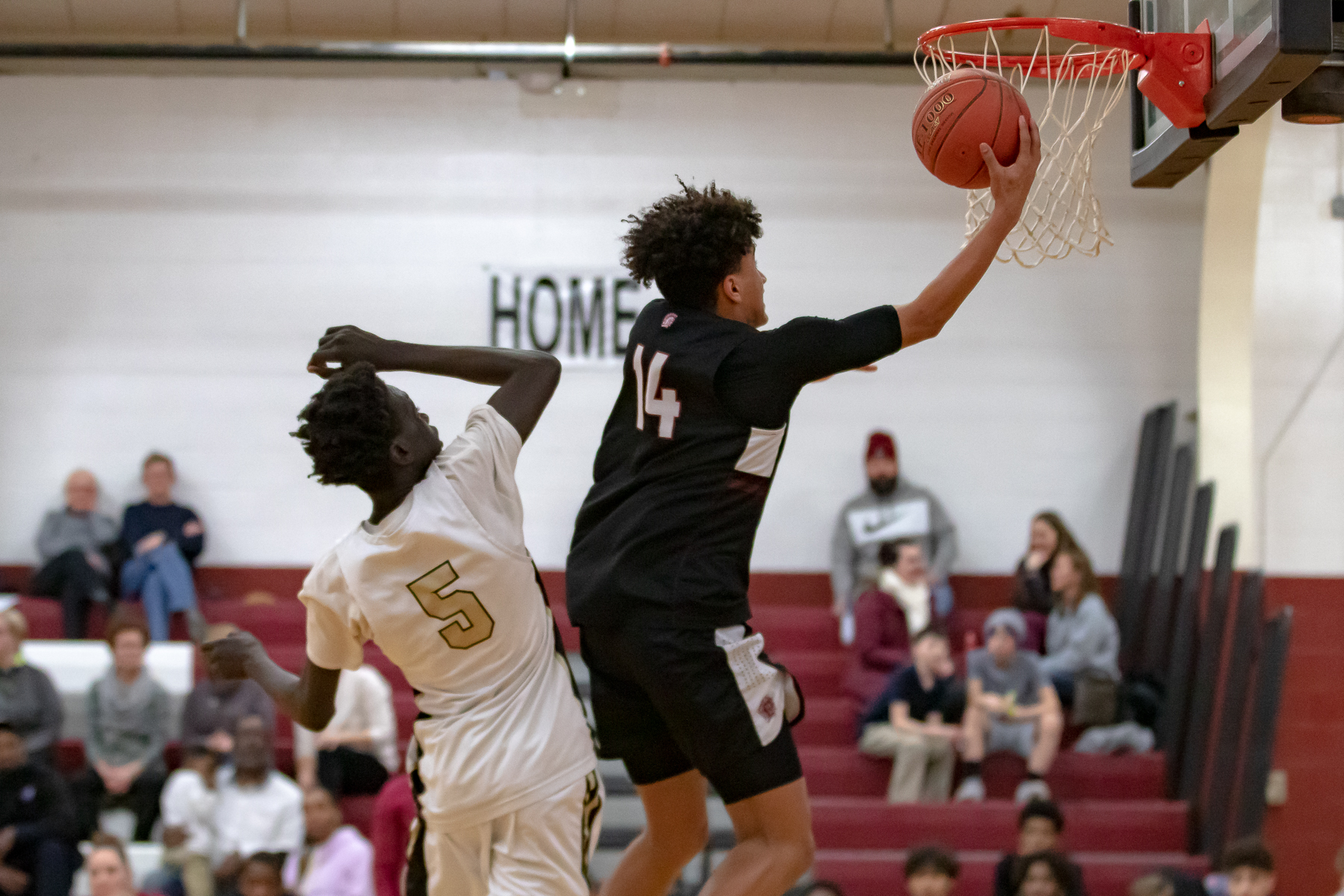 Richfield's Mitchell January drives to the basket to score two of his nine points against Fridley on Friday night at Richfield High School. Photo by Gary Mukai, SportsEngine