Cade Haskins scored 17 of his 20 points in the second half, including the game winner, as the Islanders erased a first-half deficit. 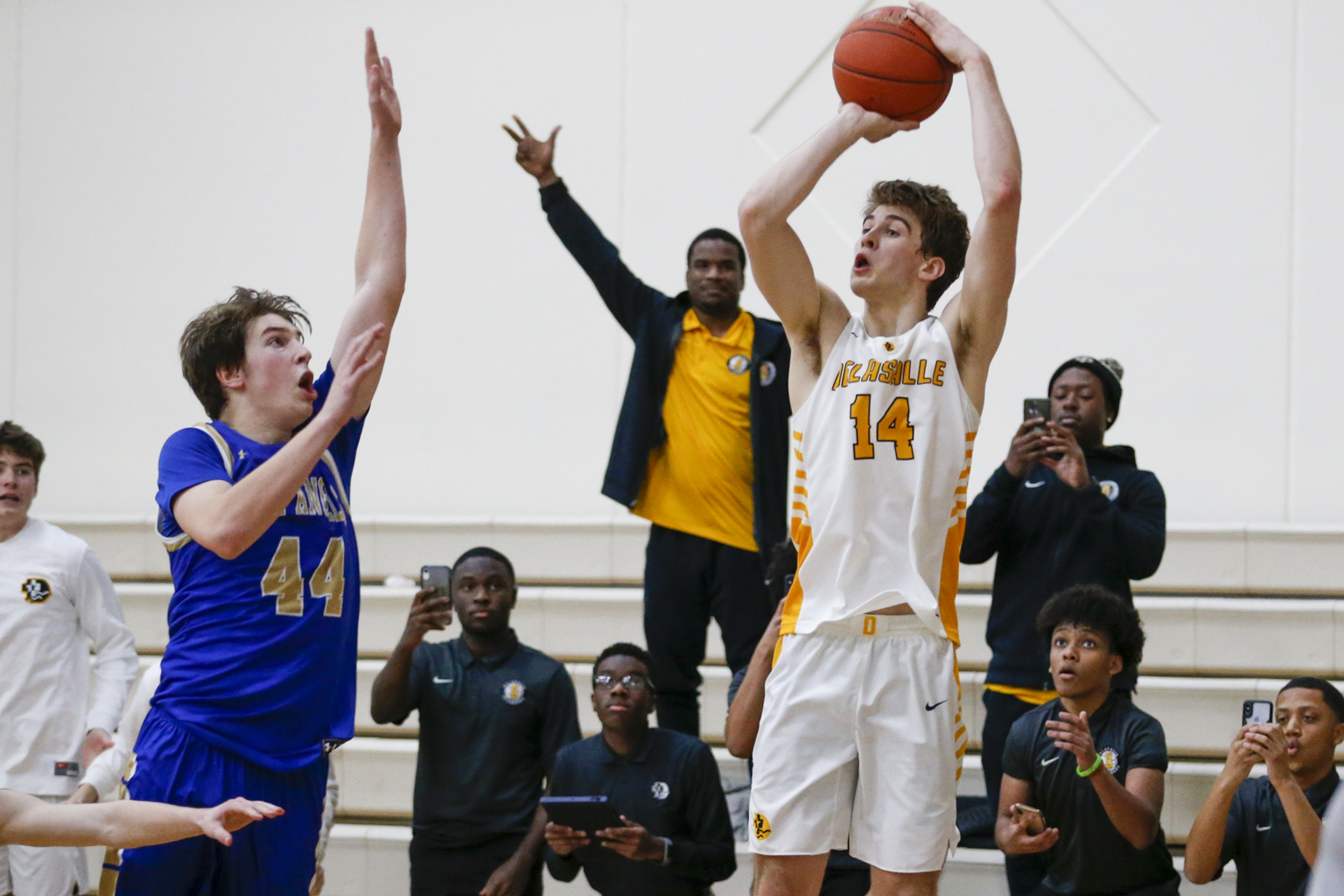 DeLaSalle's Cade Haskins (14) puts up the game-winning three-point shot at the buzzer to defeat Holy Angels 59-56 Friday night in Richfield. Haskins had a team-high 20 points for the Islanders. Photo by Jeff Lawler, SportsEngine

Defeating DeLaSalle has never been an easy assignment for Holy Angels since joining the Tri-Metro Conference six years ago. The Stars came close on Friday night at Holy Angels in Richfield, but ultimately fell to the Islanders 59-56 on a last-second shot by junior forward Cade Haskins.

After a timeout with the score tied 56-56 and 1.6 seconds left on the clock, DeLaSalle went to Haskins, who scored 17 of his 20 points in the second half.

“I said I wanted the ball because I had already hit some,” said Haskins. “It doesn’t matter where I am on the court, I just want to shoot it.”

The game started promisingly for Holy Angels (11-6, 2-1), which led 32-24 at halftime on an impressive mix of offensive sets, including several outside shots and nice drives through the lane by senior guard Nate Kesti and sophomore guard Emmett Johnson.

Despite the final score, a full house got the chance to celebrate one of their own, as senior guard Matt Banovetz scored his 1,000th career point late in the first half.

“He does so many things for us on both ends of the court,” Holy Angels coach Andy Hannan said of Banovetz. “Just a great accomplishment.”

“We knew Holy Angels hadn’t beaten us and that they were going to come after us,” said DeLaSalle coach Travis Bledsoe. “That was a tough environment and I’m proud of how they kept their composure. We haven’t been in a fight during a conference game for awhile so that was good for us, especially with playing Eden Prairie tomorrow.”

Was hosting Eden Prairie, ranked No. 1 in Class 4A by Minnesota Basketball News, at home a distraction that led to the Islanders' slow start in this game?

“We did talk a lot about Eden Prairie this week, but Holy Angels brought a lot of energy to this one. I’m glad our toughness kicked in,” Bledsoe said. "We've built the team around Jalen and Cade, but our guards set the tone on defense."

Haskins added: “They’re a great team but it shouldn’t have come down to the wire."

Both teams are led by former basketball stars — Holy Angels coach Andy Hannan ’01 was a guard/forward for the Stars, and DeLaSalle coach Travis Bledsoe ’05 was a shooting guard for the Islanders. Both were finalists for Mr. Basketball and, as coaches, both led their teams to the state tournament in their first year.

When asked to describe the feeling of leading their alma mater to the state tournament, both Hannan and Bledsoe called it “surreal.”

“I came up short as a player in the section championship, so to get over that hump as a coach was pretty special,” Hannan said.

Bledsoe said: “I’m proud to carry on the tradition at DeLaSalle." 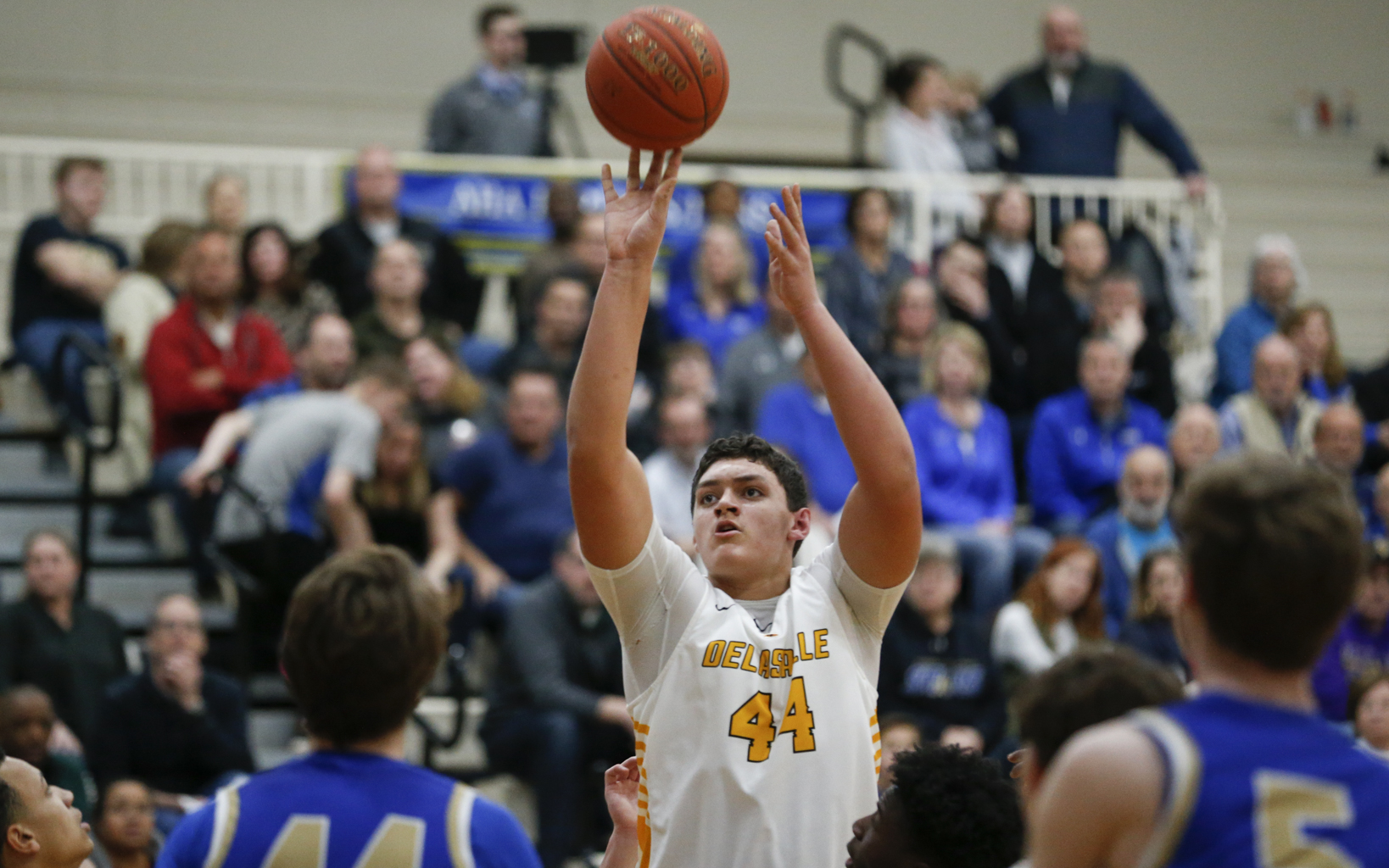 DeLaSalle's Jalen Travis (44) puts up a shot against Holy Angels Friday night. Travis had 12 points in the Islanders’ 59-56 victory over the Stars in Richfield. Photo by Jeff Lawler, SportsEngine

A full house watched a tight game on Friday night as DeLaSalle defeated Holy Angels 59-56 on a last second shot by junior forward Cade Haskins at the Academy of Holy Angels in Richfield. DeLaSalle, ranked No. 3 in Class 3A by Minnesota Basketball News, continued its conference winning streak against the Stars, who have yet to defeat the Islanders since joining the Tri-Metro Conference six years ago.

Holy Angels (11-6, 2-1) started the game strong with a stellar performance by senior guard Matt Banovetz, who scored his 1,000th career point in the loss. He ended the night with 26 points and 11 rebounds.

With the Stars ahead 32-24 at halftime, the Islanders used improved defensive pressure to take the lead with 8:34 left in the game and never trailed again.

After some early foul trouble, Haskins scored 17 of his 20 points in the second half to lead the Islanders (13-2, 4-0) with 20 points. Jalen Travis added 12 points for the Islanders and Emmett Johnson added 14 for the Stars. 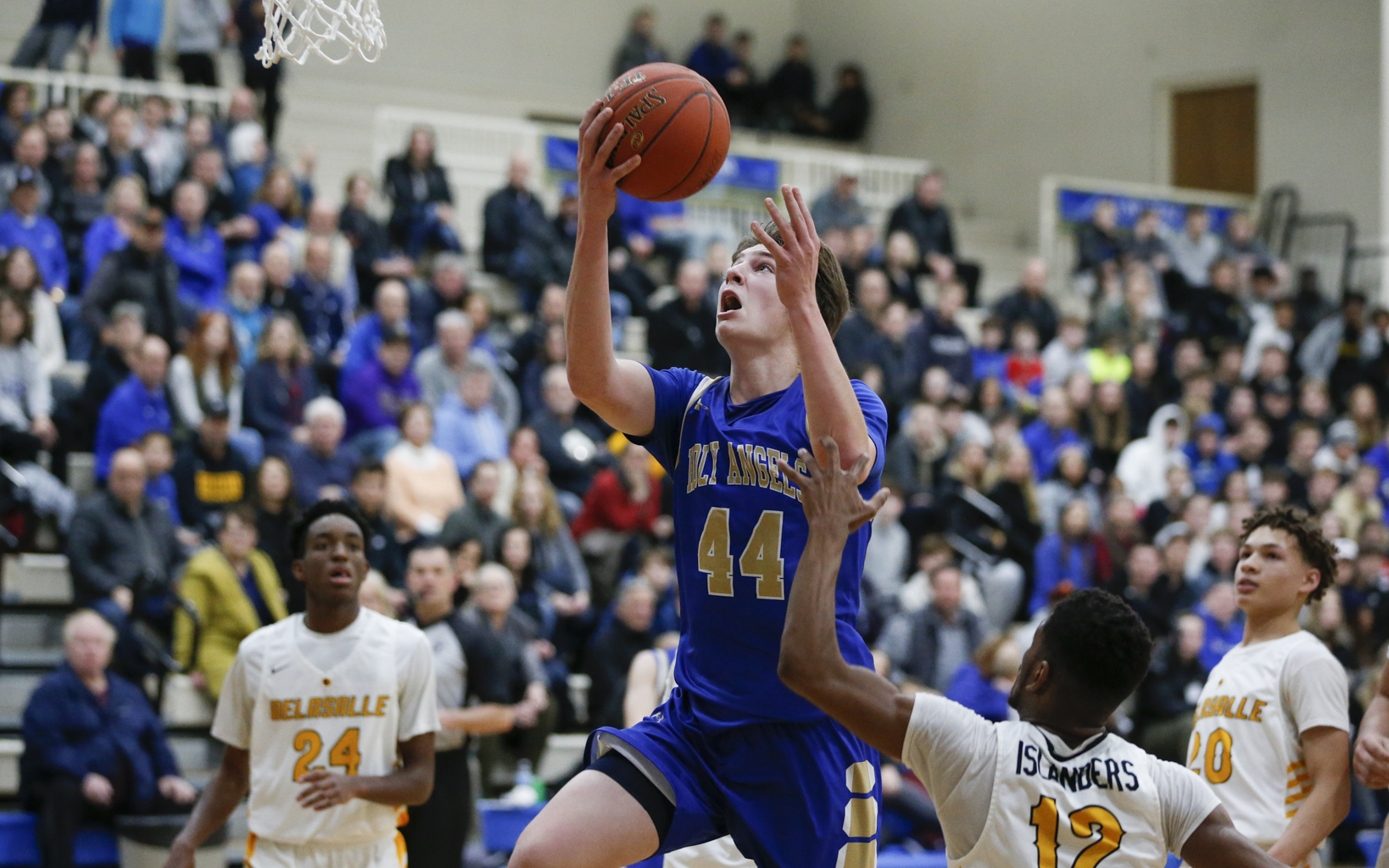 Holy Angels' Matt Banovetz (44) goes up for two of his 26 points against DeLaSalle Friday night. Banovetz eclipsed the 1000 point mark in the Stars’ 59-56 loss to the Islanders in Richfield. Photo by Jeff Lawler, SportsEngine