Kerwin Walton led the Royals by scoring at will in the second half for 17 of his 26 points. 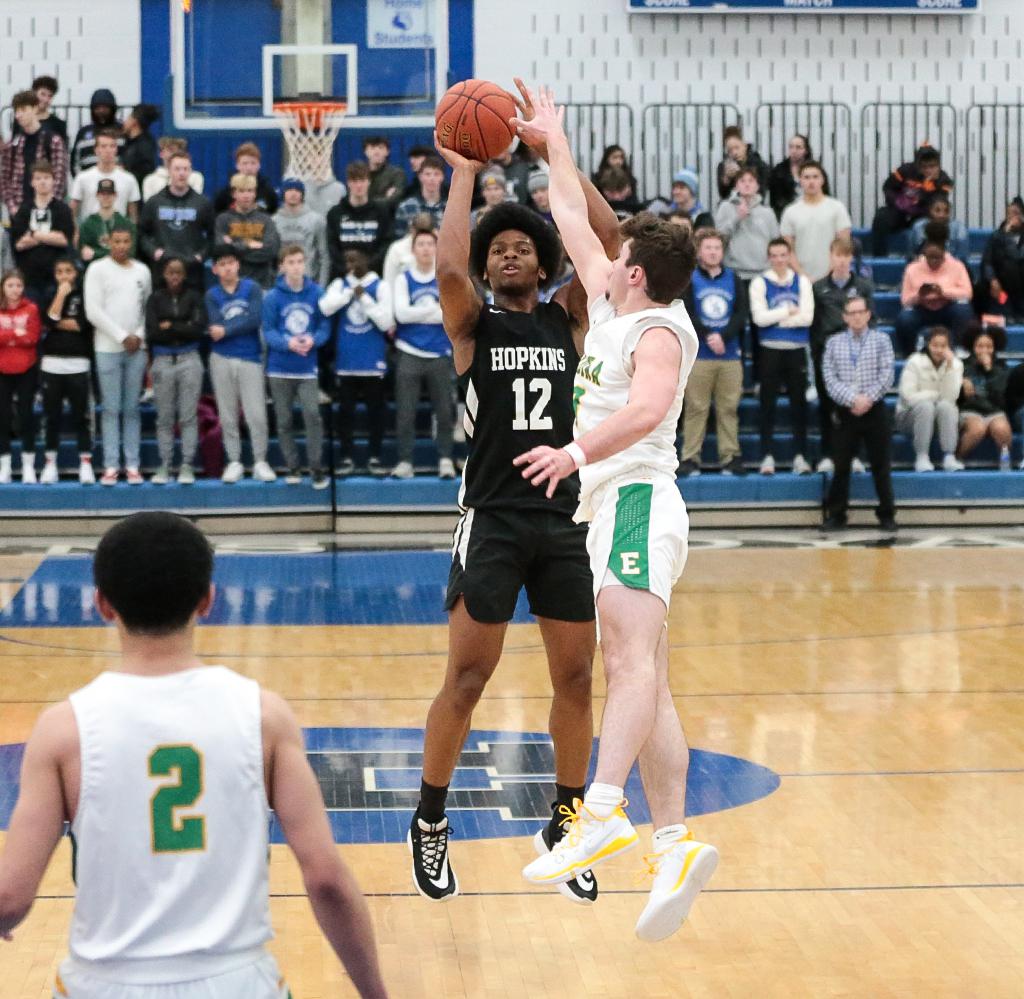 Kerwin Walton (12) takes a shot from the top of the key. Walton scored a game-high 26 points as the Royals defeated Lake Conference rival Edina 69-58 on Friday night. Photo by Cheryl A. Myers, SportsEngine

Records are decided by wins and losses, but performances can say a lot more about a team than their record. Teams, coaches and players are expected to be satisfied after a win, but given the expectations that go along with Hopkins basketball, coach Ken Novak Jr. was not pleased with just getting a 69-58 win against Edina.

“I thought we were very undisciplined and very sloppy,” he said. “It’s not about the win, it’s not about the loss, it’s about every single time going out and playing the possession and playing the right way. If you don’t play the right way you’re going to get yourself beat and we were able to pull it out, but we have to make sure we’re much crisper, cleaner, much more fundamental than we were.”

The sloppiness and undisciplined play was still enough for a win, and a big reason for that was the play of Kerwin Walton. He finished with a game-high 26 points, and 17 of those points came in the second half, when the Royals, ranked No. 5 in Class 4A by Minnesota Basketball News, played much better as a team on the offensive end. 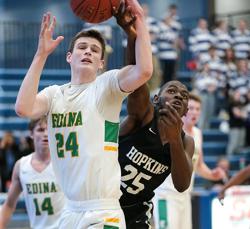 “We started to get a little more patient, started reversing the ball, everybody started touching it a lot more and everybody felt comfortable with their shots,” Walton said.

It was clear that he was comfortable, as he started draining threes from close to NBA range. It’s not that surprising, considering the player he studies the most is Damian Lillard, who earned the nickname Logo Lillard due to his extreme range.

“I study a lot of Damian Lillard. I try to mirror his form and the way he gets his shots off, his range and how comfortable he looks when he shoots and how he attacks the rim,” Walton said.

Walton’s performance impressed Edina coach Joe Burger, as he called him “one of the best shooters in the state right now.” He added that he was happy with the way his sophomore guard Sammy Presthus guarded Walton in the first half.

“He’s playing with a tremendous amount of confidence right now and he’s going against the state’s best based on who we play and what our schedule is,” Burger said about Presthus.

He was the best player on the floor for the Hornets (9-9, 1-5) tonight, as he had a team-high 16 points and five assists, adding four rebounds and two steals.

There is still about a month until the section playoffs start, and Novak Jr. and Walton both expressed that the Royals (14-4, 5-1) are not at a place where they want to be right now. That doesn’t mean they aren’t confident that they will get there within the next month. 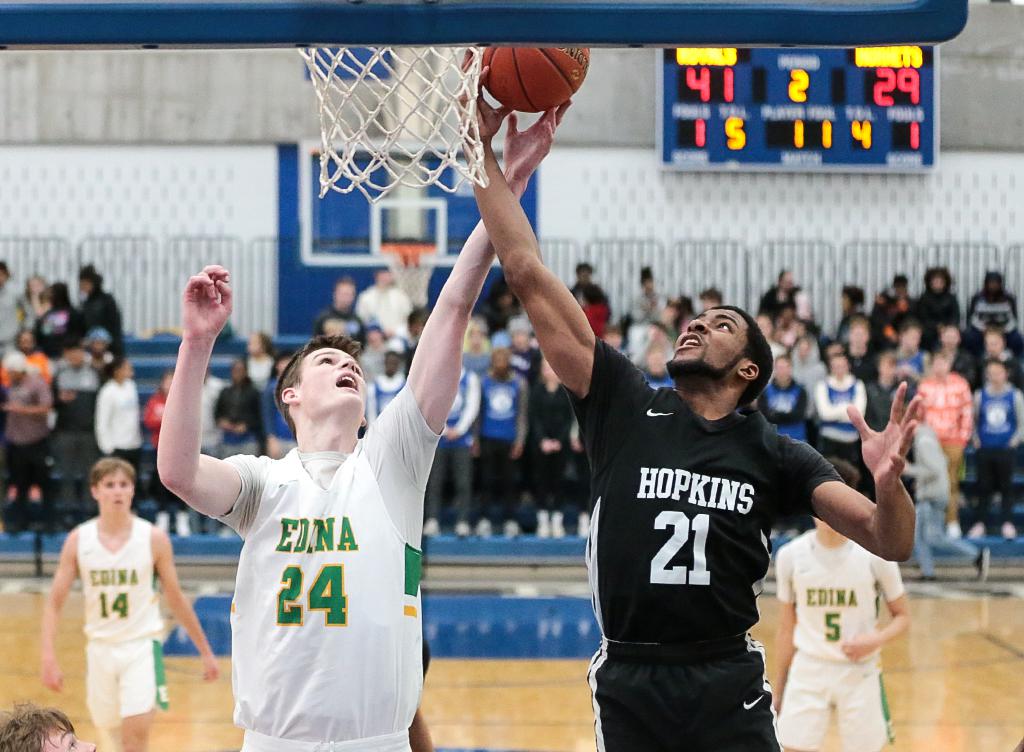 Hopkins' Andre Gray (21) blocks Brady Helgren's lay up in the second half. Gray tallied 12 points in the Royals 69-58 win over Edina. Photo by Cheryl A. Myers, SportsEngine

Hopkins picked up its fifth Lake Conference win in six tries when it defeated Edina 69-58 Friday night at home in the Lindbergh Center.

Sammy Presthus led the way for the Hornets (9-9, 1-5), as he had a team-high 16 points and a team-high five assists. Jacob Hutson and Brady Helgren each added a double-double, as they combined for 23 points and 26 rebounds. 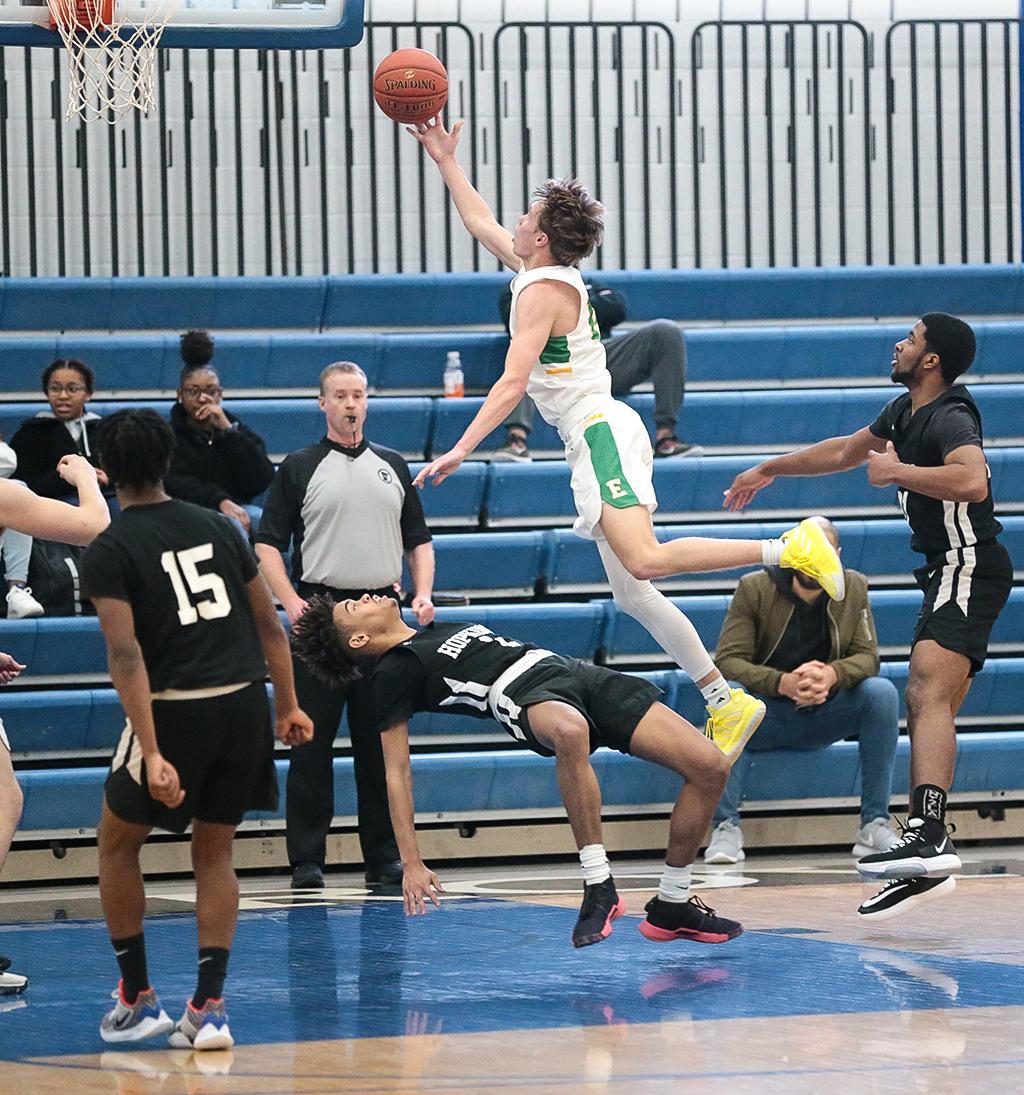 Edina's Sammy Presthus (14) drives to the basket over Hopkins' defender Jaelen Treml (1). Presthus scored a team-high 16 points for the Hornets. Photo by Cheryl A. Myers, SportsEngine