The top-ranked Eagles led by as many as 29 points in the first half and cruised throughout. 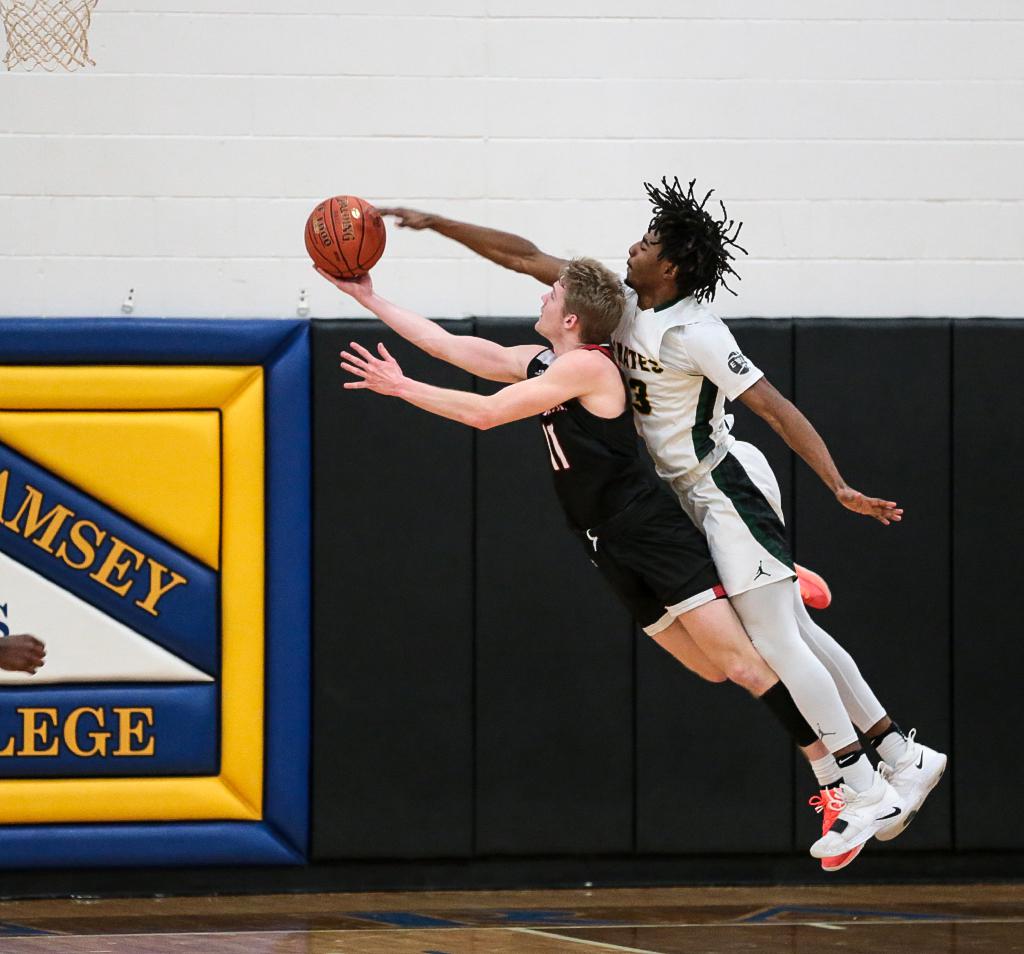 Eden Prairie's Drake Dobbs dives to the net under the arms of Detavius Frierson. Dobbs led all scoring with 31 points in the Eagle's decisive 82-64 win over the Park Center in the Jack Link's Hall of Fame matchup. Photo by Cheryl A. Myers, SportsEngine

There was a basketball game scheduled between Eden Prairie and Park Center at Anoka-Ramsey Community College Saturday.

But the Eagles decided to put on a clinic instead.

Eden Prairie showed why it is No. 1 in the class 4A Minnesota Basketball News rankings by dismantling the Pirates 82-64 at the inaugural Jack Link's Minnesota High School Basketball Hall of Fame Winter Classic.

"We’ve grown up with those guys from Park Center, playing AAU ball together, so there's a little bit of a rivalry," said Eagles guard Drake Dobbs, who scored 31 points. "So this was a lot of fun."

It also was impressive, as the Eagles (15-0, 4-0) remained unblemished in the regular season by blowing out Park Center 46-20 in the first half and cruising to the win. 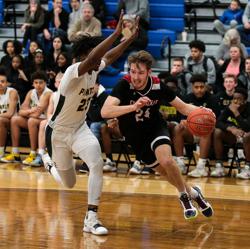 It began with defense. Eden Prairie allowed baskets on the Pirates' first two offensive possessions, then kept them from making a basket for 13 minutes.

"What our guys have done a great job of is following the scouting reports," said sEden Prairie coach David Flom. "They know the tendencies, and they are often in the right spot because of it. We also have good enough athletes, and good length, so we can defend in multiple ways."

The Eagles did not allow No. 7-4A Park Center, to score a single point until Detavius Frierson sank a free throw nearly eight minutes after that second basket.

"We couldn't let Josh Brown get off, so we stalked him all over the court to take away his 3-point shooting," Dobbs said. "And we know how good Dain Dainja is, so we just tried to limit him inside. We tried to sag off some guys, depending on whether they could shoot or not. And we did a great job of that."

Meanwhile the Eagles offense erupted: Most impressive was the 3-point shooting display by Dobbs and fellow senior Connor Christensen. Both made 4-of-5 3-pointers in the first half as the Eagles connected on 9-of-14 shots from behind the arc in that period (64.3 percent).

"I think our pace of play is hard for teams to keep up with," Flom said. "And Drake Dobbs is so good at getting to the rim and finding guys in space, he's really tough to guard. But we can score in a lot of ways for sure."

But Eden Prairie also was successful driving to the basket, breaking down defenders on the dribble, running the break off misses — in short, just about everything it tried in the first half.

"With our offense, we have free movement and shared the ball pretty well," Dobbs said. "It's pretty hard to guard when you have five guys who can shoot the ball."

The result was 20 straight points by Eden Prairie after those two early Park Center buckets. The Eagles led by as many as 29 points in the first half and cruised throughout, never leading by less than 22 points before the Pirates scored the game's final 10 points to account for the final margin.

Dobbs was one of four players to finish in double figures for the Eagles: Christensen and Austin Andrews each finished with 19, while John Henry added 12.

Eden Prairie was not perfect on Saturday. But the Eagles sure came close.

"There's always something to improve upon," Flom said. "In the second half they started burying us too deep in the post, so that's something we can work to address. And I thought we got a little sloppy at the end. But I'm pretty happy with what I saw today."