Charlie Katona scored 20 of his game-high 35 points in the first half, helping the Sabers to a 48-29 halftime lead. From there, the Sabers cruised. 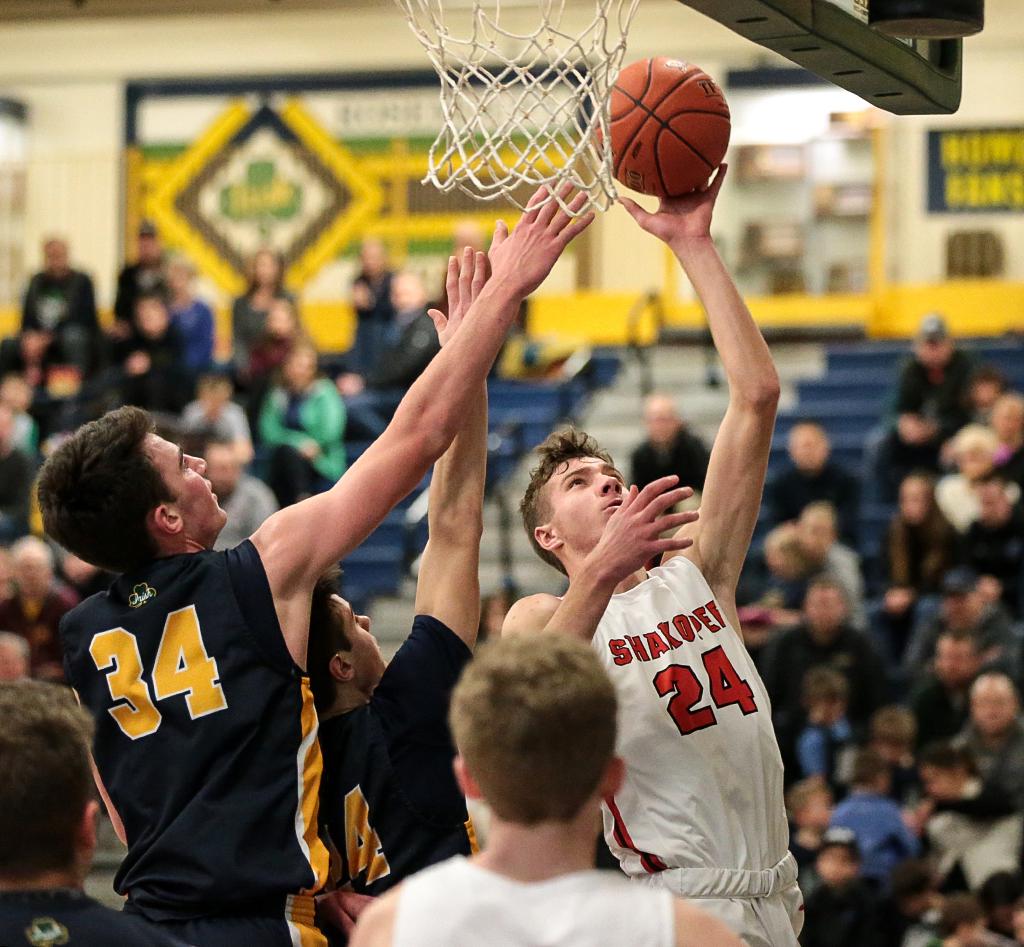 Shakopee's Charlie Katona (24) puts the ball up past two Rosemount defenders. Katona's game-high 35 points led the Sabers to an 84-71 win over the Irish on Friday night. Photo by Cheryl A. Myers, SportsEngine

From the game’s opening minutes Friday night it was easy to see that Shakopee’s players had a great understanding of one another on the court.

The Sabers, ranked No. 6 in Class 4A by Minnesota Basketball News, attacked and defended as a unit, their play making things difficult for Rosemount, which was held to just 29 points in the first half.

Shakopee senior forward Charlie Katona proved to be a standout force. He was able to get to whatever spot he wanted and found teammates when it seemed passing was the right play to make. The Irish (5-3, 0-2) had no answer for Katona, as he put up a commanding 35 points in the Sabers’ 84-71 victory at Rosemount High School.

The triumph erased a two-game skid for the Sabers, and gave them a coveted win against a South Suburban Conference opponent.

Katona believes the love the Shakopee (7-2, 2-0) players have for each other is what makes the team special. He works hard to continue building that into the Sabers’ identity. 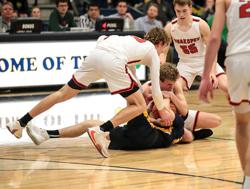 “Showing that I love each and every one of my teammates, and knowing that I’ll be there for them and they’ll be behind me as well,” he said. “They’ll have my back. I’ll have their back.”

Sabers coach Jake Dammann said his team will need that chemistry to make a further playoff push this season.

“We are at our best when we are playing together and for each other,” Dammann said. “We talk a lot about the togetherness and trust in our teammates and exemplifying that in how you can play as an individual and also how you can contribute to the team aspect.”

The culture of Shakopee had a big influence on Katona’s decision for choosing to play for Minnesota Duluth next year.

“The coaching staff was a big piece for me,” Katona said. “They get what younger kids are like and they can really relate to all their players — they’re just very fun and energetic. They love to have fun, but yet they’re still serious enough to get work done.”

Katona appreciates the family aspect of Minnesota Duluth’s culture. He talked about how the team sometimes eats meals together at the coach’s house.

Dammann stated how the Bulldogs’ program is run is at the center of who Katona is off the court.

“We talk so much about relationships — trust, communication, togetherness,” Dammann said. “I think a lot of that Charlie exemplifies in how he approaches not only basketball, but approaches who he is. What really drew him to Duluth was that relationship piece and that connectedness with your teammates and your coaches.”

Minnesota Duluth was one of the first schools to send an offer, which gave Katona the opportunity to start getting to know the coaches throughout the summer.

Katona, who is excited for his future as a Bulldog, noted he still has unfinished business, and more to learn from his coaches and teammates in his last season with Shakopee.

“Trust everyone, that’s the biggest thing,” Katona said. “What goes around comes around. If you put in the work it’s going to show out on the court. If you love each other, the ball is going to go in the hoop.” 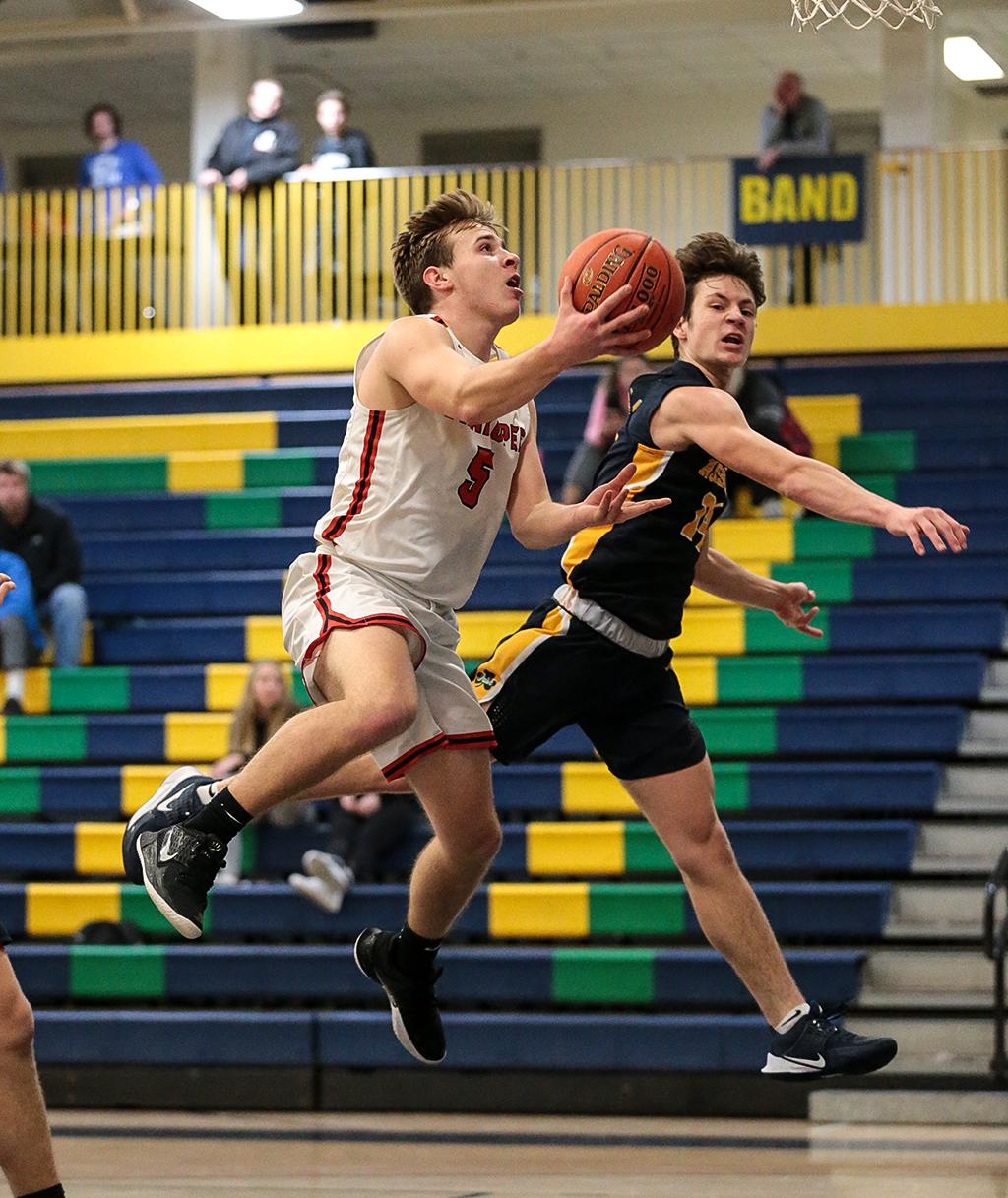 Shakopee's Caleb Druvenga (5) lays the ball up for two of his 15 points on Friday night. The Sabers took an early lead and eased past South Suburban Conference rival Rosemount for an 84-71 win. Photo by Cheryl A. Myers, SportsEngine

The Sabers (7-2, 2-0) started the game with efficient scoring and defensive stops to build a 48-29 lead to end the first half.

Katona, a senior forward who is committed to Minnesota Duluth, scored 20 of his 35 points in the first half for Shakopee, ranked No. 6 in Class 4A by Minnesota Basketball News. Teammate Caleb Druvenga, a senior guard, added 15 points.

Rosemount (5-3, 0-2) got into more of a rhythm in the second half, scoring 42 points, including seven three-pointers. Sophomore guard Caleb Siwek led Rosemount in scoring with 28 points.

With Friday’s loss, the Irish have been defeated in three straight games after starting the season 5-0. 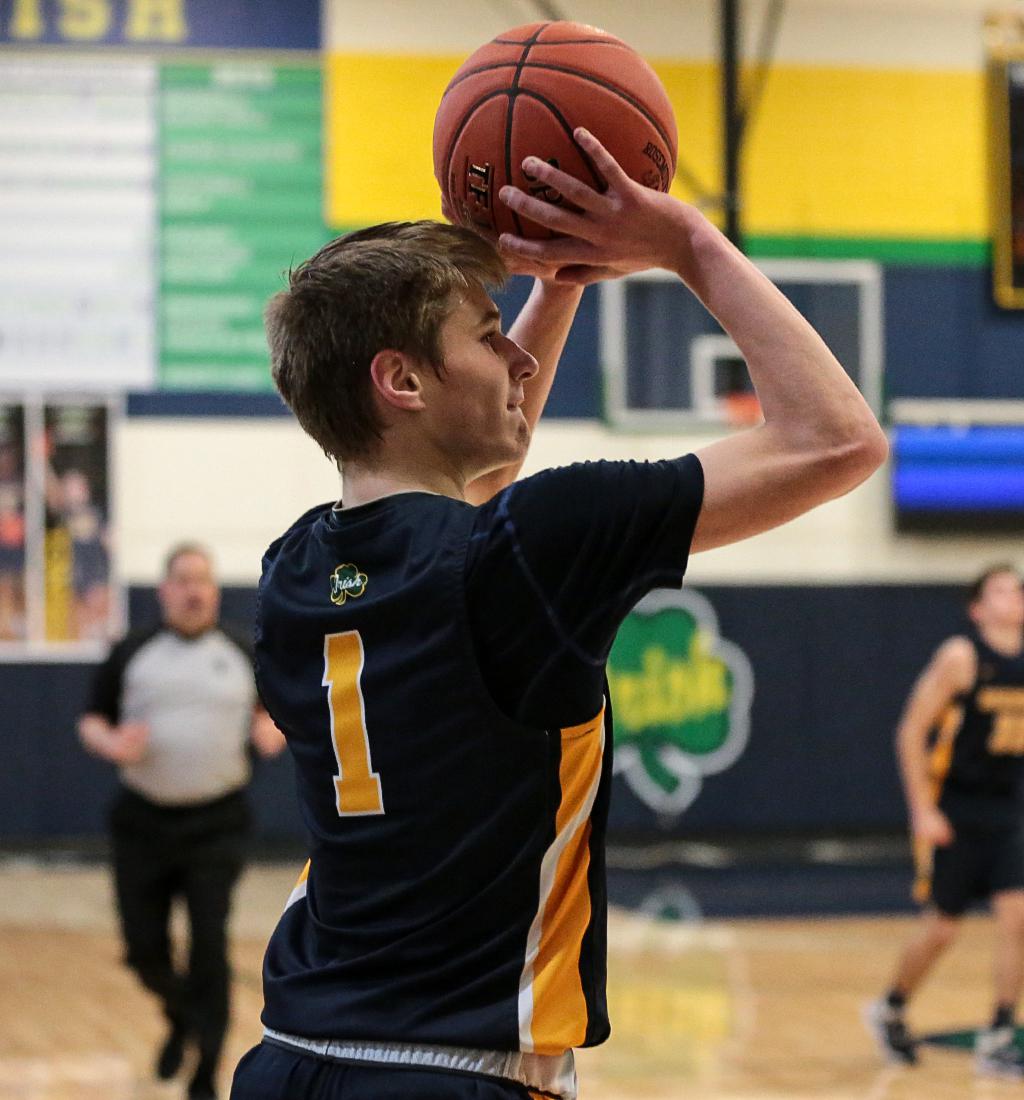 Caleb Siwek scored a team-high 28 points for the Irish at Rosemount High School on Friday night. Down by 19 at halftime, Rosemount closed the gap but fell to Shakopee 84-71. Photo by Cheryl A. Myers, SportsEngine