J'Vonne Hadley led the Raiders' offense, recording a game-high 23 points in their win against the Eagles. 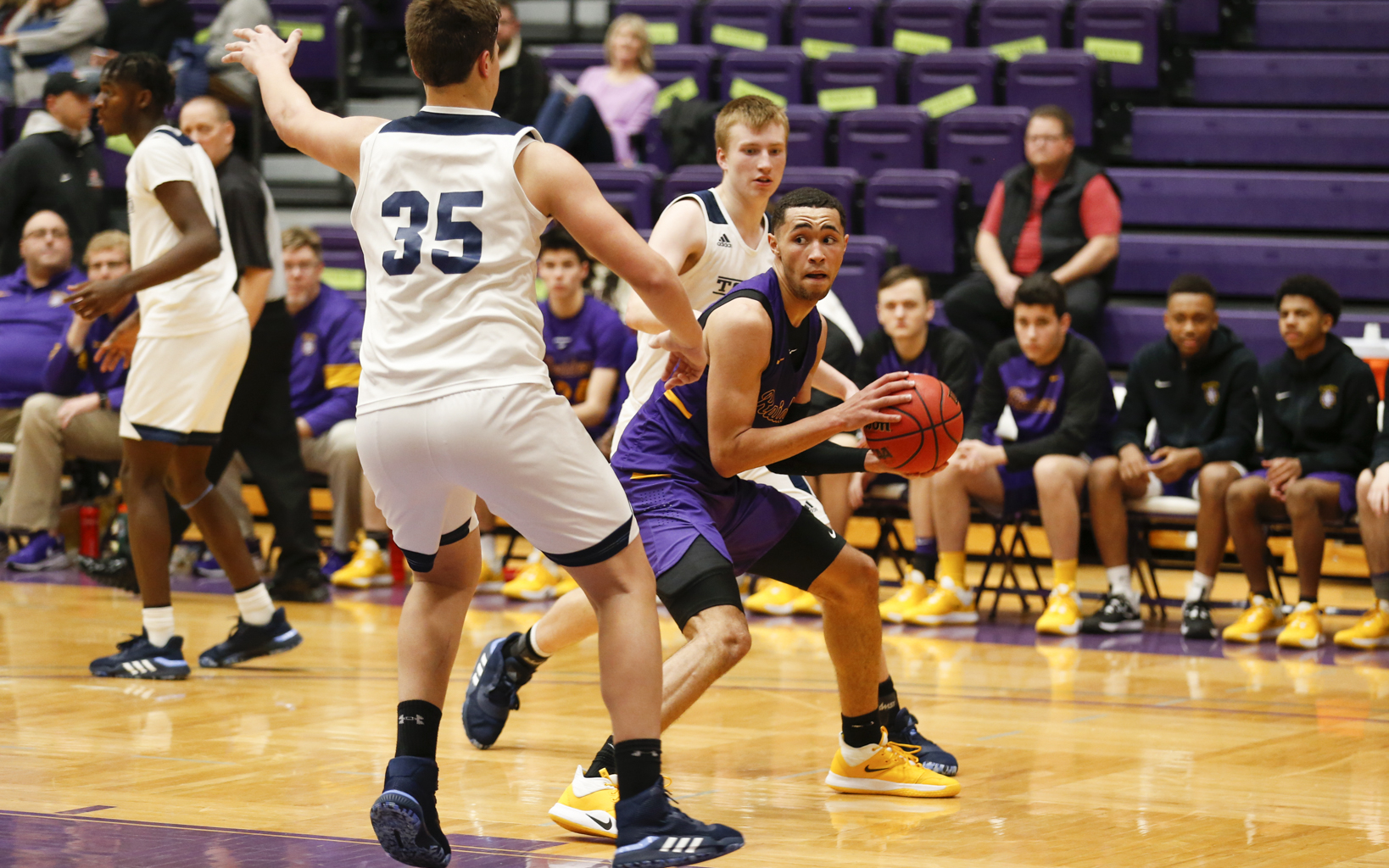 Cretin-Derham Hall's J'Vonne Hadley (2) looks for a passing lane against Totino-Grace Saturday night. Hadley had 23 points in the Raiders’ 64-54 victory over the Eagles at the University of St. Thomas. Photo by Jeff Lawler, SportsEngine

Cretin-Derham Hall got punched in the mouth on Friday night, losing 83-74 to Wayzata after it had won seven consecutive games.

"After the game, we got together as a team and we also talked about it on social media," said Raiders senior forward J'Vonne Hadley. "We talked about how we have to forget about it. It's one loss, and it won't define our season, so we talked about coming out and playing hard today so we didn't lose another one."

Consider it a lesson learned.

The Raiders, ranked No. 2 in Class 4A by Minnesota Basketball News, rebounded from Friday’s defeat to knock off Totino-Grace 64-54 at the University of St. Thomas Classic played at Schoenecker Arena Saturday.

Hadley scored a game-high 23 points, including 13 in the first half. Teammate Tre Holloman, a sophomore, scored 12 points, and senior Curtis Jones added 11 for the Raiders.

Freshmen C.J. O'Hara and Taison Chatman each recorded 13 points to lead No. 4-3A Totino-Grace, while Joe Alt added 11 points.

Cretin-Derham Hall coach Jerry Kline Jr. said his team benefited from having to play another game less than 24 hours after losing to Wayzata.

"When you play back-to-back games, you can't dwell on a loss — you have to get ready for the next game," he said. "But we'll learn a lot from the Wayzata game. The open looks we gave up hurt us; we have to do better defensively, because our mistakes hurt us."

On Saturday night the Raiders came out hard, especially on defense, and they rolled to a quick 10-2 advantage in the game's opening seven minutes.

"That was one of the things we talked about after the Wayzata game; we wanted to start this game out super-hard on both offense and defense," Hadley said.

"Our defense does create a lot of things for us," Kline said. "When we're playing well on defense, we're getting into the other team's minds and that creates a lot of easy transition offense for us."

But Totino-Grace made some free throws late and came as close as seven points late in the first half before the Raiders took a 33-23 lead into the locker room at halftime.

"I thought we were kind of shell-shocked early," said Eagles coach Nick Carroll. "Their win over Minnehaha Academy gave them a lot of credibility in the basketball ecosystem. We had to play them for a while, and realized they were human and then we got comfortable."

Cretin-Derham Hall appeared to put the game out of reach with a 13-2 start in the first seven minutes of the second half, with Totino-Grace making just one basket in that span.

"They have interchangeable pieces that allow them to switch a lot of stuff," Carroll said. "It made it challenging to get to some of the actions we wanted to get to. I thought as the game went on, we got better at attacking some gaps."

The Eagles did make one final run, using 9-for-11 shooting at the free-throw line to come as close as eight points with 1:15 to play.

"We wanted to keep them under 65 [points], so defensively we did what we wanted to do," Carroll said. "But Wayzata shot 60 percent from three against [my team], and we missed a couple of looks we wish we could have back. We needed to make some shots."

Now, Cretin-Derham Hall does not play again until it hosts Irondale on Jan. 7, so Kline promised his team will take a long, hard look at the loss to Wayzata.

"We have a lot of practice time next week, so we will watch the Wayzata film a lot," Kline said. "We're going to talk about toughness, about staying together when you face adversity. We're just going to continue to work." 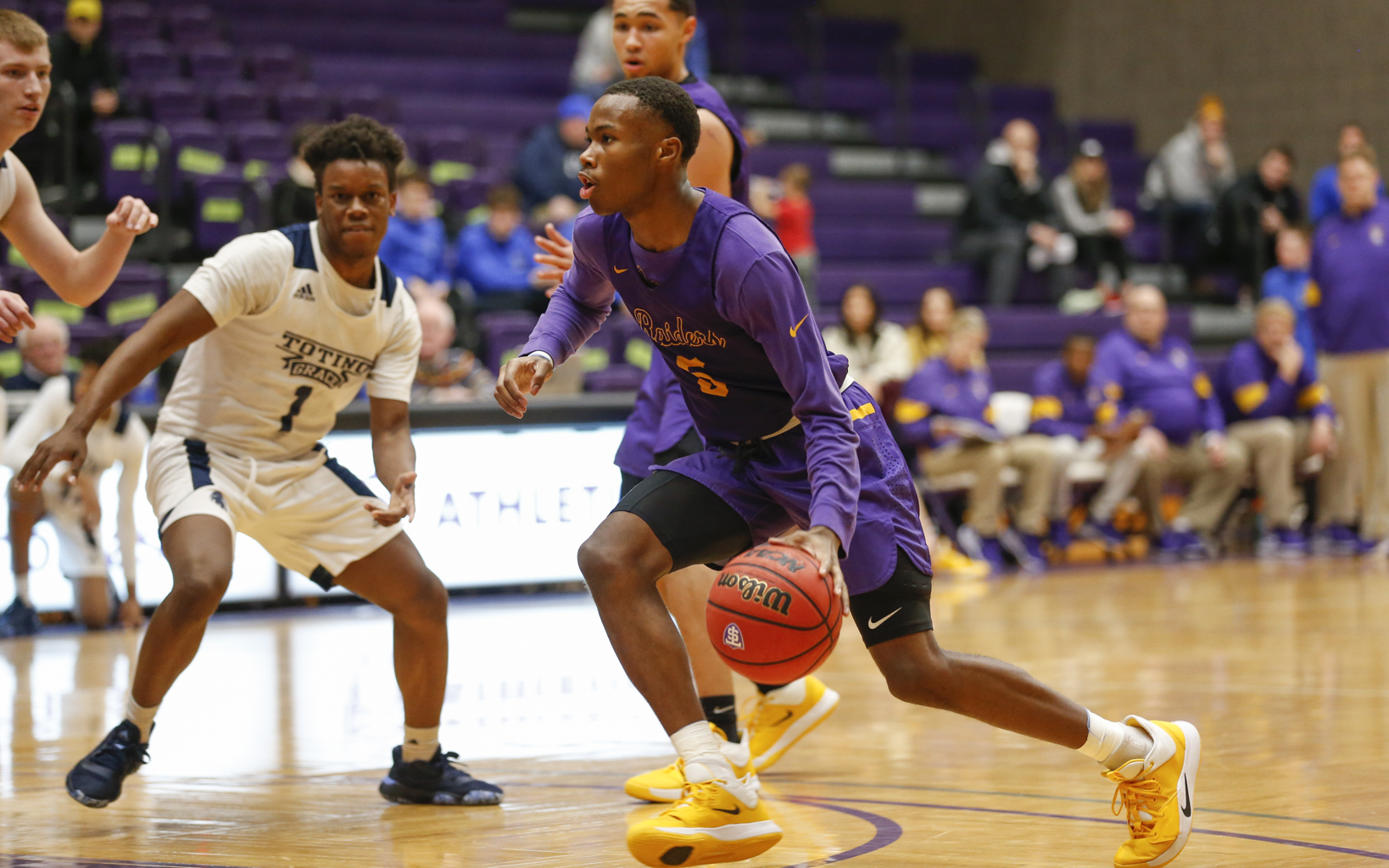 Cretin-Derham Hall's Tre Holloman (5) dashes down the lane against Totino-Grace Saturday night. The Raiders defeated the Eagles 64-54 at the University of St. Thomas. Photo by Jeff Lawler, SportsEngine

J'Vonne Hadley scored 23 points, including 13 in the first half, to lead Cretin-Derham Hall to a 64-54 victory over Totino-Grace in the University of St. Thomas Classic played at Schoenecker Arena Saturday.

The Raiders, ranked No. 2 in Class 4A by Minnesota Basketball News, jumped to an early 10-2 lead and were in control from there.

Cretin-Derham Hall then outscored No. 4-3A Totino-Grace 13-2 in the first seven minutes of the second half to build a 46-25 advantage. Totino-Grace managed to trim the margin to 58-49 with 3:31 but came no closer than eight points the rest of the way.

The Raiders' Tre Holloman and Curtis Jones backed Hadley with 12 and 11 points, respectively. 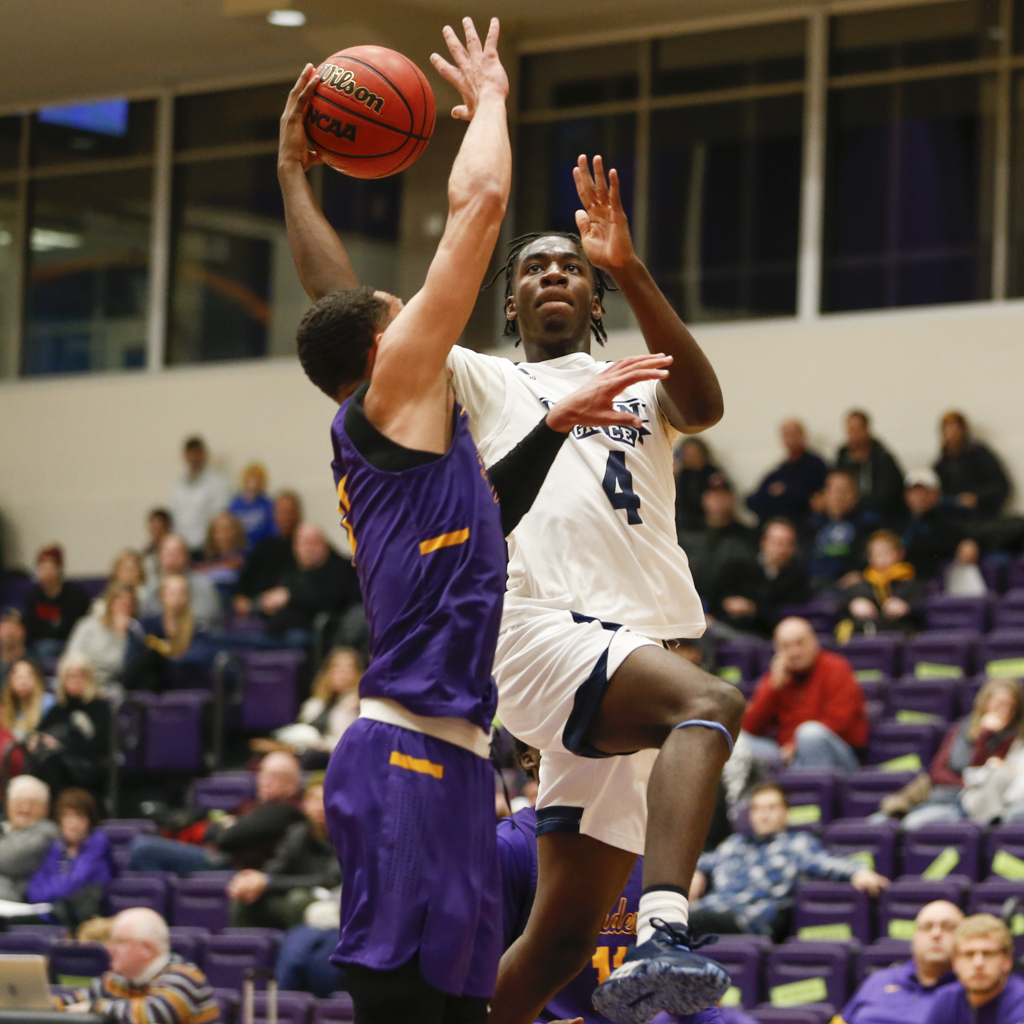 Totino-Grace's CJ O'Hara (4) drives for a layup against Cretin-Derham Hall Saturday night. The Eagles fell to the Raiders 64-54 at the University of St. Thomas. Photo by Jeff Lawler, SportsEngine