Austin heats up in second half to take down Lakeville North

The Packers took a 40-37 lead — their first of the game — midway through the second half and never looked back. 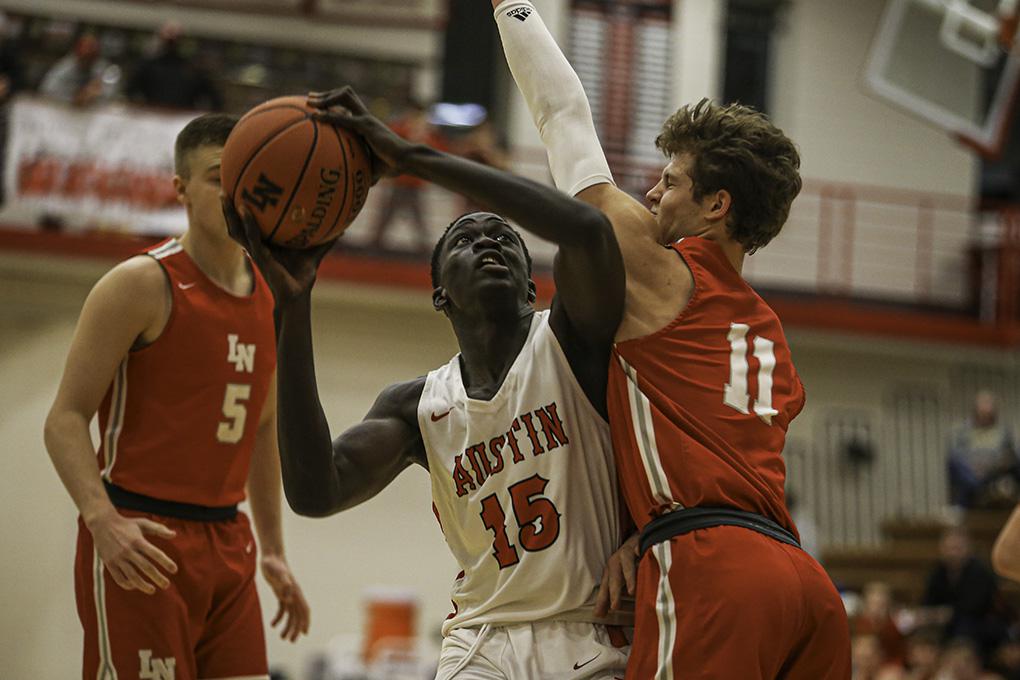 It was time for Austin to find another gear.

Lakeville North controlled the tempo of play early to build a 12-point halftime lead on Friday, but visiting Austin ramped up the pressure to roar back for a 55-50 win at the Lakeville North Holiday Invitational.

It was a signature win for the Packers (6-1, 5-1) who graduated eight players from last year’s team that placed third in the Class 3A state tournament. New faces recreated the type of fast-paced, athletic basketball that's made Austin, ranked No. 6 in Class 3A by Minnesota Basketball News, a tough program to beat in recent years.

"I just feel like it was the change of defense we picked up and the energy we had," said Austin senior guard Agwa Nywesh. "We didn't have a lot of energy in the first half. Coming into the second half, we were like ‘this shouldn’t be the score right now. We’re way better than this and should show them what we have.’”

The Panthers (4-3, 1-0) asserted their dominance early in the rematch of a game they won by 20 points at the same invitational a year ago. 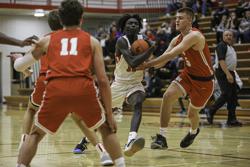 Tyler Wahl, who now plays at Wisconsin, was one of six seniors on Lakeville North's squad from a season ago that had a runner-up finish in the Class 4A state tourney. With so many new faces in the lineup, the scoring slack has been picked up by committee.

Friday was Carter Frechette's time to shine. The Panthers' senior forward sunk four threes and scored all of his game-high 20 points in the first half.

The Packers, meanwhile, were held scoreless for the game's first four minutes and looked lifeless in a halfcourt-based game, playing into the Panthers' hands to give Lakeville North a 31-19 lead at halftime.

Austin coach Kris Fadness extended the Packers’ initial half-court pressure all the way to 84 feet after the break. Turnovers led to transition opportunities, and those chances led to points in the paint, and open three-point looks off of drive and kicks.

The Packers opened the second half with a 21-6 run to lead 40-37 midway through the half. The rally was fueled by five made threes.

"Defensively, we picked it up a notch. Like I told the guys, it’s amazing when you pick up the intensity level defensively what happens on the offensive end. Shots start going in," Fadness said. "We hit that stretch where shots were raining. The ball movement was better and the defensive pressure got us going."

Frechette was unable to get good looks in the second half, so Lakeville North's offensive attack shifted to senior guard Josh Kamara in the latter stages. His ability to get to the basket produced eight of his 12 points in the second half.

One of his baskets pulled Lakeville North ahead 46-42 with less than nine minutes remaining. But Austin responded with an 11-0 run with four different players scoring.

Nywesh facilitated the offense to the tune of eight points, three assists and two rebounds. The late-rising college prospect can create his own opportunities, which was seen in his 36-point effort in Austin’s 70-48 defeat of Rochester John Marshall last week.

When Austin's at its best, Nywesh is the fulcrum of a multifaceted lineup.

"Agwa is a complete player, and when he’s distributing it makes us better," Fadness said.

Lakeville North played the foul game to catch up and was able to pull within 53-50 in the final 30 seconds. The Panthers rushed a potential game-tying three with 10 seconds left.

Ogur Gari, who finished with 11 points, snagged the rebound and dished it to Nywesh who made a pair of game-clinching free throws. 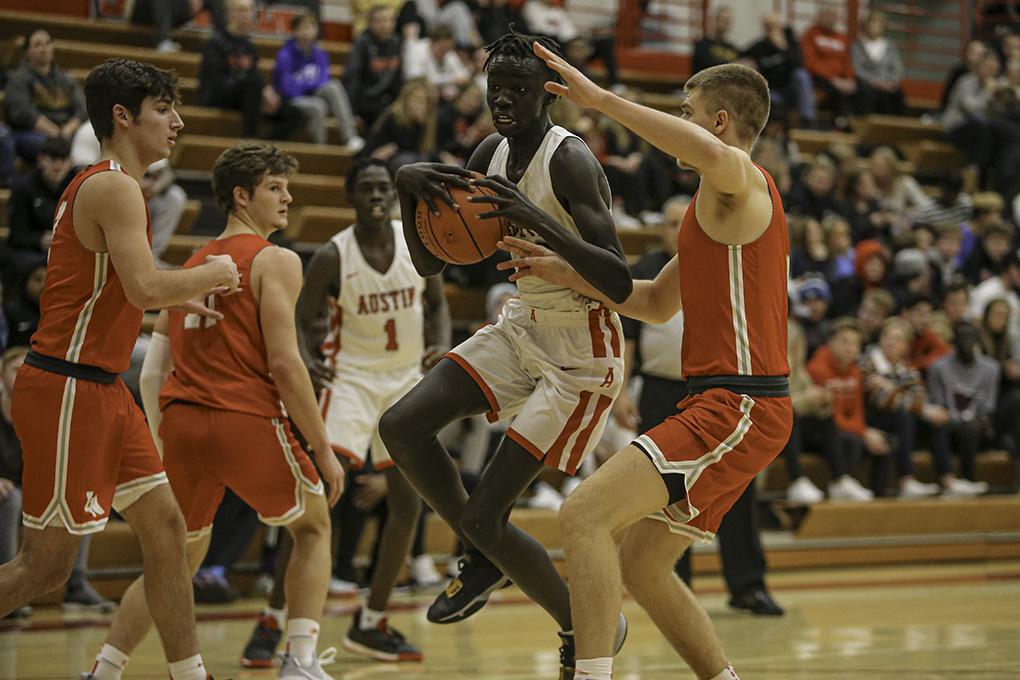 Austin's Ogur Gari drove past Lakeville North's Noah Frechette as the Packers rallied in the second half. Photo by Mark Hvidsten, SportsEngine

Trailing by 12 points at halftime, Austin used full-court defense and proficiency from deep in the second half to fuel its comeback for a 55-50 win at Lakeville North Friday.

Carter Frechette was the story of the first half for the host Panthers. The senior forward hit four threes and scored all 20 of his points before halftime.

The Packers, ranked No. 6 in Class 3A by Minnesota Basketball News, extended from half-court to full-court pressure after the break to stymie the Panthers. Austin took a 40-37 lead — their first of the game — midway through the second half on a Teyghan Hovland three-pointer.

Lakeville North (4-3, 1-0) fought back to briefly take the lead before Austin (6-1, 5-1) regained control in the closing minutes. The Panthers pulled back within one possession and had a three-point attempt to tie the game fall short with 10 seconds to go.

Okey Okey led Austin with 12 points and was one of seven Packers to score. Teammate Ogur Gari added 11 points. 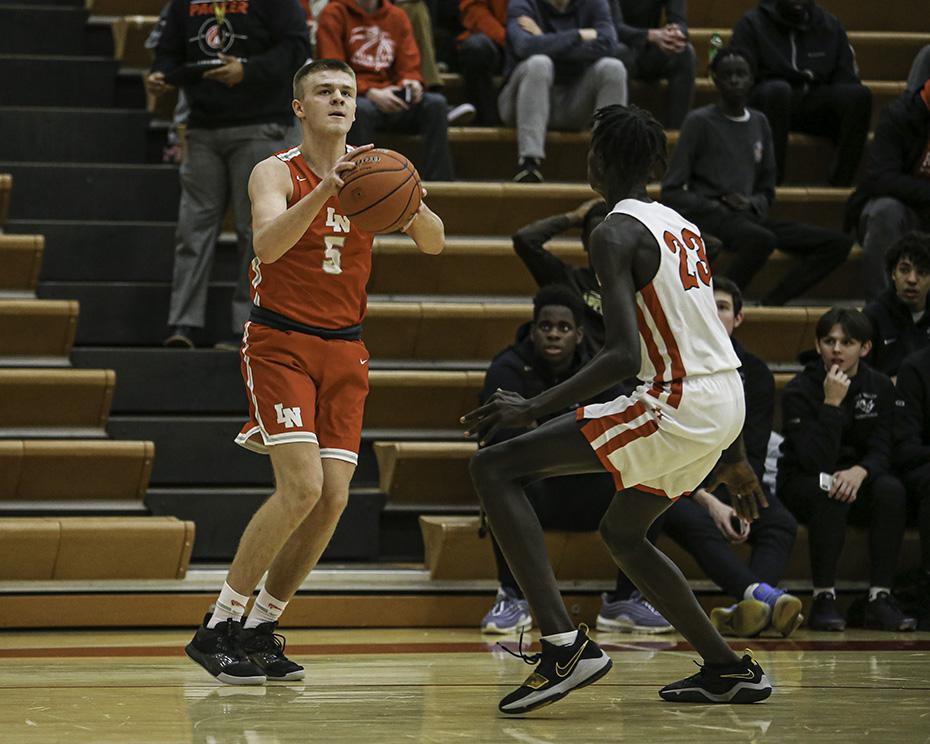