Kerwin Walton scored 27 of his 29 points in the game’s final 18 minutes to help the Royals hold off the Redhawks. 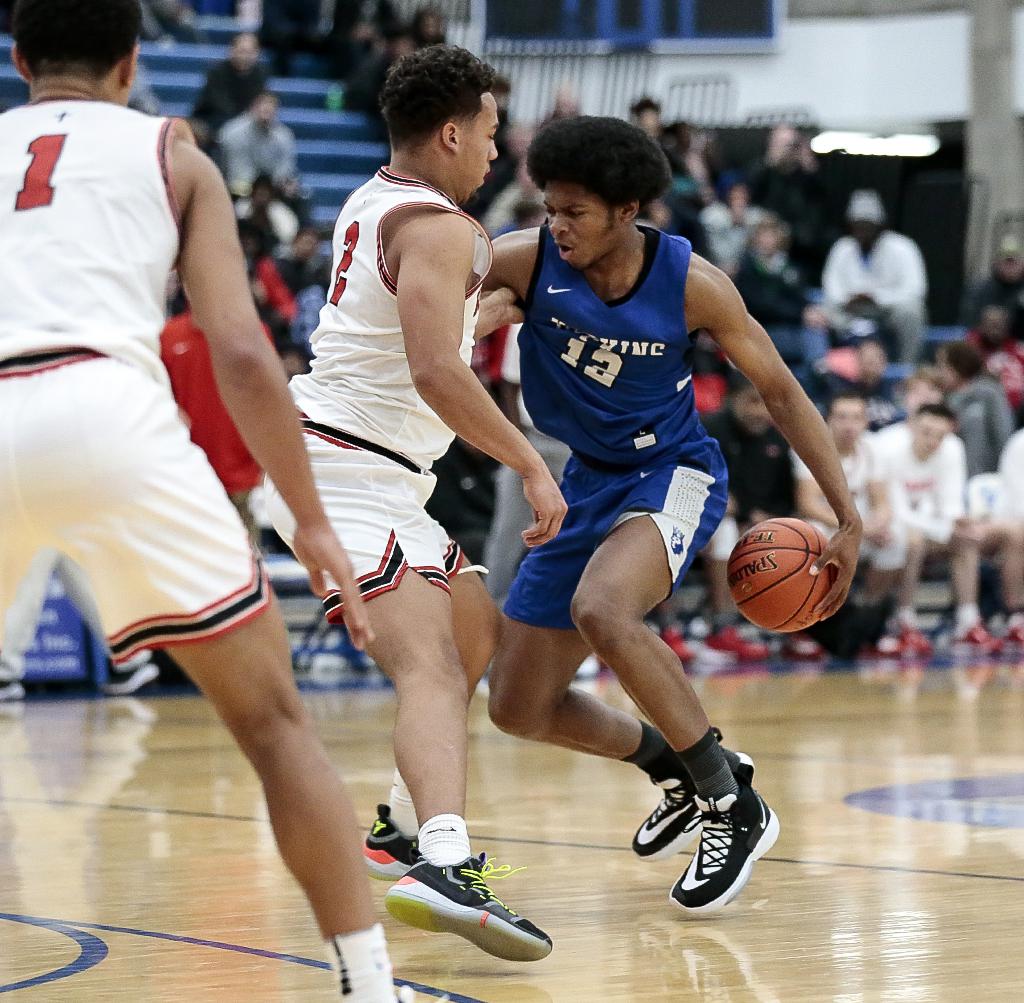 On paper, it had the makings of being a great early season bout featuring two of the state’s top teams.

Defending Class 4A state champion Hopkins, up against Minnehaha Academy, which won the last three Class 2A state titles before opting to move up to Class 3A this season. Both teams are loaded with talent and they didn’t disappoint at Hopkins High School on Tuesday.

After rallying from a 10-point deficit in the second half, Hopkins, behind the play of Kerwin Walton and Jalen Treml, pushed past Jalen Suggs and his Minnehaha Academy team to win 92-85 in overtime.

It didn’t start how most people likely expected, with the first basket coming four minutes into the game, and countless fouls. Both teams were shooting bonus just eight minutes in, and heading into halftime the Redhawks held a 37-35 lead. 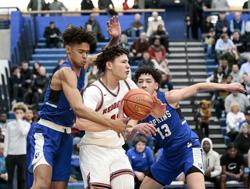 Suggs, a 6-foot-5 senior guard, scored 15 first-half points for the Redhawks, who are ranked No. 1 in Class 3A by Minnesota Basketball News, but on the other end of the floor it was a junior, Treml, who kept the No. 7-4A Royals in the fight.

Treml tallied 16 points in the first half, while Walton, a senior, was quiet with just two points entering the break.

In one stretch, Walton scored 10 consecutive points, bringing Hopkins within striking distance, before knocking down a deep three-pointer to give the Royals a 61-59 lead with 9:49 remaining.

“I felt as long as I look to score more, and be more aggressive, that’s what changed for me,” Walton said regarding his second-half mindset. “Seeing how much space there was on the floor and taking advantage of it.”

Perhaps Walton’s finest play came on a crossover, before rising up and finishing with a two-handed slam as the crowd shook the gym in excitement.

“Once he started getting the ball, all of a sudden it started breaking it open for everybody else,” Novak said of Walton, who finished with a team-high 29 points and 11 rebounds.

Suggs, meanwhile, was as dynamic as ever. He was all over the floor, skying high not only for rebounds, but for highlight-reel moments, like his massive one-handed slam followed by a stare into the crowd.

“Suggs is always going to make you compete,” Novak said. “He’s probably as good a competitor as you’ll ever see.

Suggs poured in a game-high 41 points and hauled in 12 rebounds to carry the Redhawks, who played shorthanded without their 7-foot junior center Chet Holmgren. But Suggs missed the potential game-winner when he launched a 30-footer as time expired in regulation.

Then the pivotal moment came when Suggs fouled out of the game just one minute into overtime with Hopkins already up by four.

But Hopkins wasn’t out of the water, yet. After a foul by the Royals, Minnehaha Academy was able to cut the lead to just three with 15 seconds remaining, before Treml went to the free-throw line.

He knocked down both shots, finishing with 23 points. It was part of an effort that led to the Royals make 30 free throws as a team.

“We can’t leave practice without hitting 10 free throws in a row,” Treml said. “(Novak) always stresses that after we take a break we come back and shoot free throws.”

Despite the win, Novak isn’t getting caught up in the excitement.

“It’s just not that important. We take things much slower than everybody else, so it’s going to take a little longer to get going,” he said. “it’s early.” 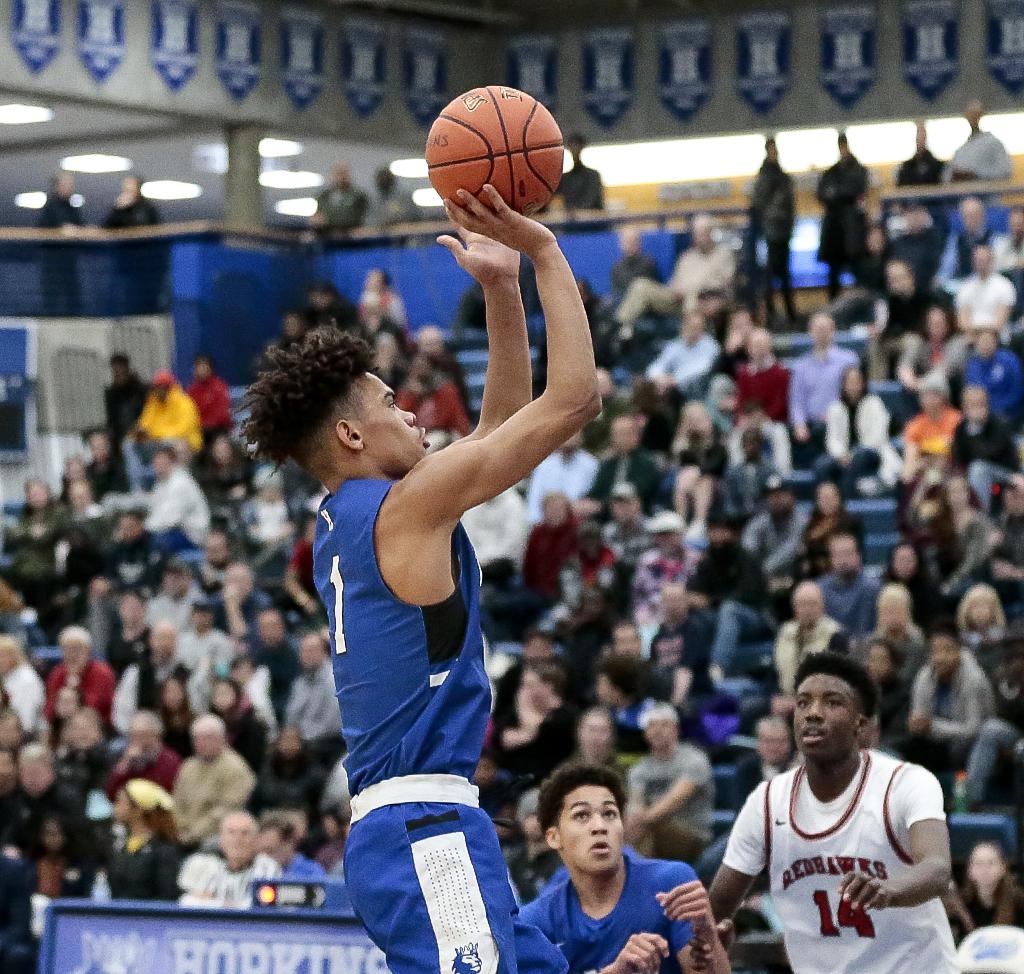 Hopkins' Jaelen Treml pulls up and shoots from the top of the key. Treml led the Royals' offense early in the game, scoring 16 of his 23 points in the first half. Photo by Cheryl A. Myers, SportsEngine

Hopkins, the defending Class 4A state champion, rallied in the second half Tuesday night to force overtime and take down Minnehaha Academy 92-85 at Hopkins High School.

It wasn’t a pretty first half. It took more than four minutes for the first basket to be made, and 19 fouls later, the Redhawks, ranked No. 1 in Class 3A by Minnesota Basketball News, had a razor-slim 37-35 lead at halftime.

After Redhawks senior Jalen Suggs, who finished with 41 points and 12 rebounds, missed a potential game-winner from 30 feet out before time expired in the second half, the game went into overtime tied at 80. Just a minute in, Suggs fouled out and Hopkins outscored the Redhawks 12-5 in the final four minutes to secure the win. 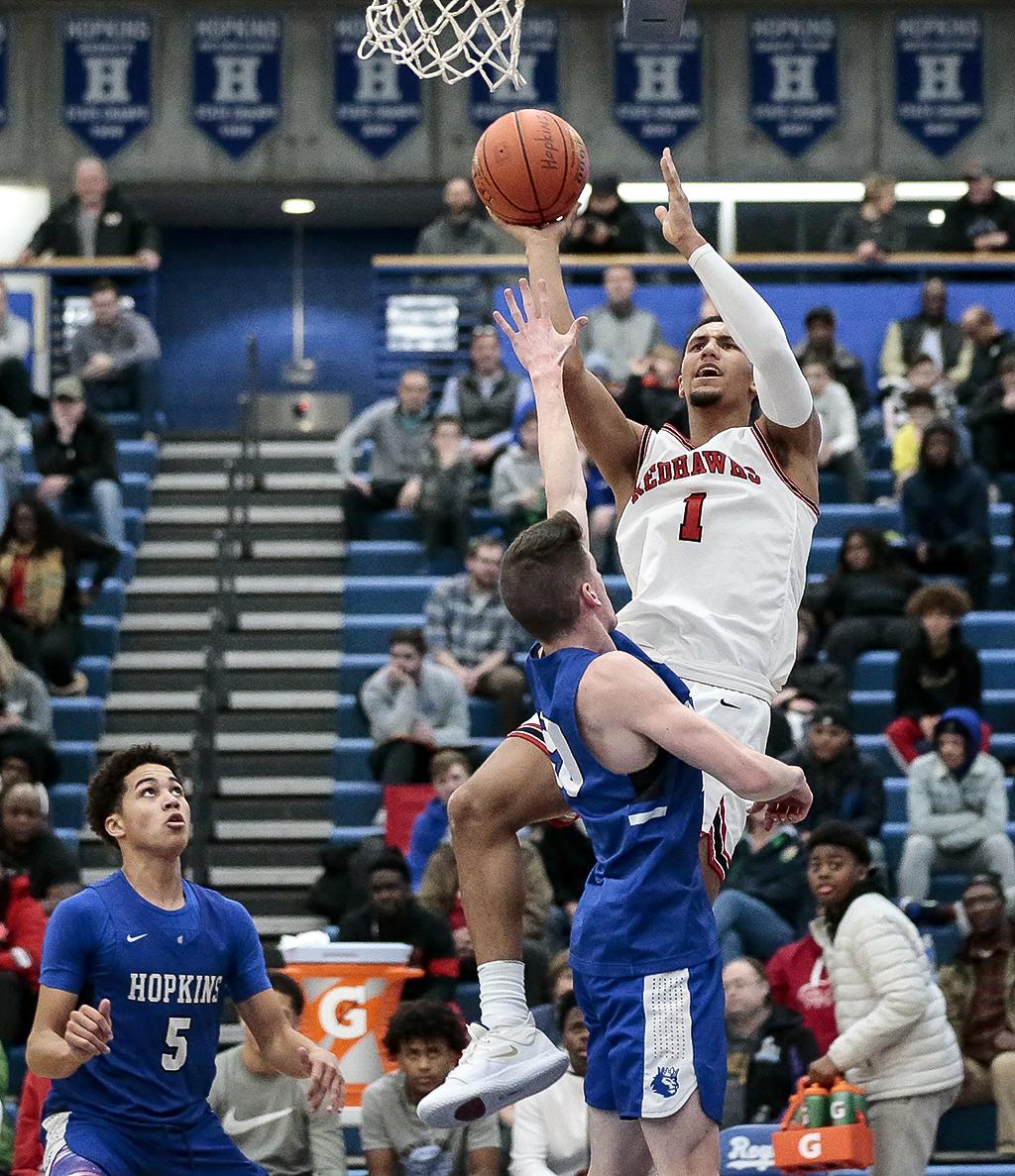 Minnehaha Academy's Jalen Suggs shoots the ball over the head of Hopkins' defender Sawyer Shrake. Suggs led all scoring with 41 points and 12 rebounds before fouling out of the game early in overtime. Photo by Cheryl A. Myers, SportsEngine